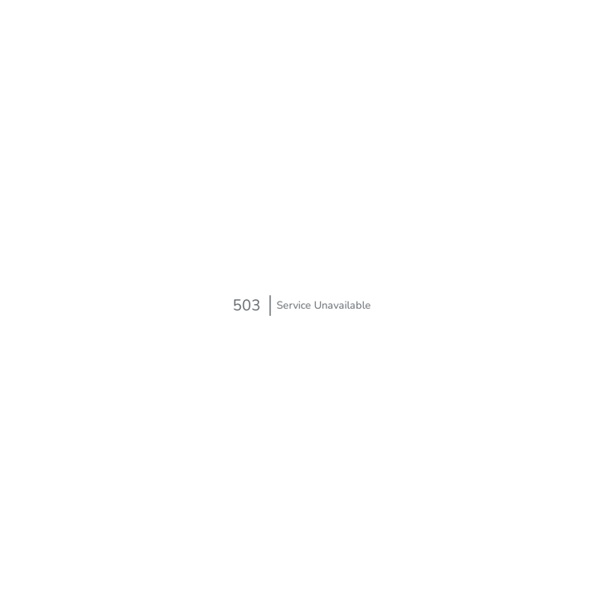 Welcome! Religion, or at least religious inquiry, is something that virtually all humans have in common. In all corners of the world and in all eras of history, people have wondered about the meaning of life, how to make the best of it, what happens afterwards, and if there is anyone or anything "out there." The goal of ReligionFacts is to provide free, reliable information — "just the facts" — on the various answers that have been given to these questions, as well as the rituals and customs that go along with them. This very broad definition means that we have articles on a wide variety of world religions and belief systems, both ancient and modern. 237KStumbleUpon

50 Atheist Quotes - Born Again Pagan 50 Atheist Quotes George Carlin 1. The 101 Most Useful Websites on the Internet Here are the most useful websites on the Internet that will make you smarter, increase productivity and help you learn new skills. These incredibly useful websites solve at least one problem really well. And they all have cool URLs that are easy to memorize thus saving you a trip to Google. Also see: The Best Android Apps

Virtual Religion Index This site is designed to advance research in matters of religion. As a global forum that may be accessed instantaneously anywhere, the internet promises to surpass the impact of the printing press on the study of religion. Gutenberg made possible the family Bible. The WWW puts a global library of free information on the desk of anyone with a computer & internet access.Efficient use of these resources, however, requires cataloging.

Tweet-o-Meter - Giving you an insight into Twitter activity from Is it true that, "New York is the city that never sleeps!"? Do Londoners send more Tweets than New Yorkians'? Is Oslo a bigger Tweeter than Munich? Born believers: How your brain creates God From New Scientist magazine 04 February 2009 by Michael Brooks Read our related editorial:The credit crunch could be a boon for irrational belief. WHILE many institutions collapsed during the Great Depression that began in 1929, one kind did rather well.

How to win Rock-paper-scissors every time I admit it. When I first heard there are actual tournaments for Rock-paper-scissors, sanctioned by the World Rock Paper Scissors Society, I laughed. I mean seriously, $50k to the winner of a game that requires no skill whatsoever? Absurd. Folktexts: A library of folktales, folklore, fairy tales, and mythology, page 2 page 2 edited and/or translated by D. 6 Indispensable Free & Freemium SEO Tools When you are working on search engine optimization for your own business or for a client’s website, you will need some great SEO tools. If you have the budget, you can certainly pay for the best SEO tools the Internet has to offer, but if you don’t, then free and freemium tools are the alternative. Free tools are just that – free to use as much as you want for any of your projects. Freemium tools, on the other hand, have both free and premium rate plans based on your needs. The following are my six favorite free and freemium tools that are indispensable for SEO’s everywhere.

The Improbability of God The Improbability of God by Richard Dawkins from Free Inquiry, Volume 18, Number 3. Much of what people do is done in the name of God. Irishmen blow each other up in his name. Love,Peace&LO dylanthescientist: princetanaka: just a small town girl. Living in a racist, insensitive, sexist, homophobic world, (cant take the midnight train ‘cause im fuckin scared) Library of World Religions and Faith Traditions Written by the world's leading authorities on religion and spirituality, the Patheos Library offers the most accurate and balanced information available on the web. In the column below, 50 major religious traditions are listed. For each, Patheos offers thorough, peer-reviewed, encyclopedic information that helps readers understand its origins, history, beliefs, rituals, ethics, and community structures. Click on the name of a religion to read in-depth articles.

Symbols and their meaning SYMBOLS and their Meaning Introduction Occult symbols are fast replacing Christian symbols in our culture. Therefore, we encourage you to use this list to warn others, especially Christian children who intentionally wear and display them because they are popular. Keep in mind that some of these symbols have double meanings. For example, the pentagram has been used to transmit occult power in all kinds of rituals for centuries, but to Christians the same shape may simply represent a star -- a special part of God's creation. The image of a fish may mean a sign of the zodiac (astrology) to some, but to Christians it has meant following Jesus and sharing the message of His love.

Does the MLA citation for you. by lacasto Aug 23

You're welcome. I'm always happy if someone finds something of interest on my Pearltrees... Enjoy your day. by topoletta Sep 14

I''m going to pick this pearl. It's perfect for my Lifestyles tree. Thank you! by ricwag1142 Sep 19