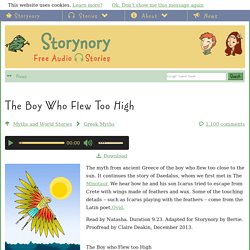 It continues the story of Daedalus, whom we first met in The Minotaur. We hear how he and his son Icarus tried to escape from Crete with wings made of feathers and wax. Some of the touching details – such as Icarus playing with the feathers – come from the Latin poet,Ovid. Read by Natasha. Duration 9.23. The Boy who Flew too High I’ve told you before about the half man-half half-bull called the Minotaur. Daedalus was a brilliant architect and inventor – in fact, he was so brilliant that King Minos of Crete did not want to let him go back to his home in Athens. Although Daedalus and Icarus had every comfort they could ask for, the father longed to return home to Athens. He thought for a long time about the best way to escape, and finally he came up with a plan, and this is what he did… He told King Minos that he needed feathers and wax for a new invention that he was working on.

The Minotaur. The Midas Touch. Download the audio to your computer (Right Click, Save As) Not all stories have a moral, but this one from ancient Greece certainly does. 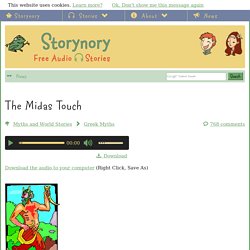 Midas has a gift – everything he touches turns to gold. But he soon learns that an excessive love of riches squeezes the truly valuable things out of life. The story begins with Silenus, a satyr, half man, half goat, who follows Dionysus the god of Wine. Read by Natasha. Proofread by Claire Deakin, December 2013. The Midas Touch There was once a dreadfully ugly beast called Silenus. Silenus was a friend of Dionysus, the God of Wine. One time after Silenus had been partying all night, he staggered out of the woods and into the palace grounds of Midas, king of Phrygia. “Ugh, he’s horrible,” exclaimed Zoe. “Ah, I’d better ask the king before I do that,” said the Gardener. When King Midas learned that there was a satyr sleeping in the rose garden, he ordered that he be given a bed in the palace until he felt better.

Helen of Troy. Download Helen of Troy We dip into mythology, with Bertie’s telling of the tale of Troy. 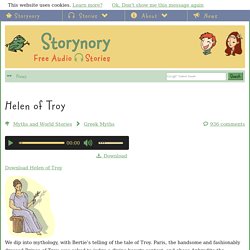 Paris, the handsome and fashionably dressed Prince of Troy, was asked to judge a divine beauty contest, and chose Aphrodite the Goddess of Love as the winner. As a reward, Aphrodite promised him the love of the most beautiful woman in the world, none other than Helen. Unfortunately, Helen was married to the King of Sparta. Orpheus. Download the audio (click to play, right click to save) We bring you this sad but, we hope, beautiful story in verse. 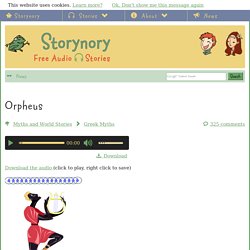 Orpheus the musician married Eurydice the shepherdess. When she was killed by a snake, he travelled down to the underworld and was granted one chance to fetch her back to life. Bertie has freely adapted this ancient tale into his own poem. Yes, we did warn you, it is sad. Adaptation by Bertie. Read by Richard. Proofread by Jana Elizabeth. I speak of a man of sweet honeyed melody, Whose love sick heart had no remedy But to travel to where none before, Save sad souls who live no more, Have been and seen and ne’r come back: Andromeda and Perseus. One of the most action-packed and exciting Greek myths is told from the point of view of Princess Andromeda. 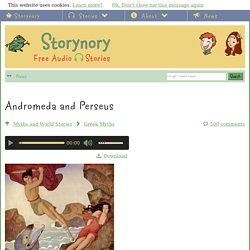 Andromeda was tied to a rock by her parents and left for a sea-monster to eat for his breakfast. Not surprisingly, she wasn’t very pleased about that. She tells us in her own voice how this came about, and how she was rescued by the Greek Hero, Perseus. We then hear Perseus’ life story, including the tale of how he cut off the snaky head of the Gorgon Medusa. Story by Bertie. Read by Natasha.

That really did happen to me – and do you know what? As I mentioned, the sea monster was dragging things out – I think he enjoyed the drama of it all. I looked up to the sky to call out: “Oh Zeus, Lord of the Heavens, send me deliverance from this foul beast and these dumb parents of mine!” Icarus and Daedalus. Perseus and andromeda. Perseus and medusa. What causes echoes. Midas. The First Aviators. How the Seasons Came to be.

The horses of the sun. Pandora. Prometheus Gives Fire to Man.