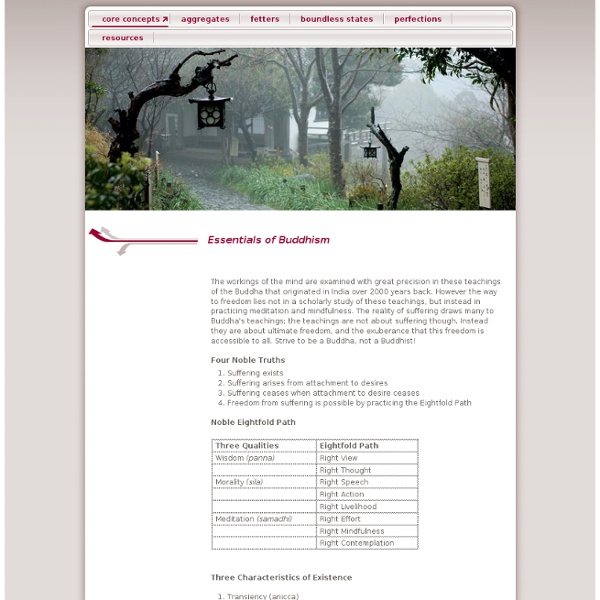 The workings of the mind are examined with great precision in these teachings of the Buddha that originated in India over 2000 years back. However the way to freedom lies not in a scholarly study of these teachings, but instead in practicing meditation and mindfulness. The reality of suffering draws many to Buddha's teachings; the teachings are not about suffering though. Instead they are about ultimate freedom, and the exuberance that this freedom is accessible to all. Strive to be a Buddha, not a Buddhist! Four Noble Truths

Judaism 101 Judaism 101 is an online encyclopedia of Judaism, covering Jewish beliefs, people, places, things, language, scripture, holidays, practices and customs. My goal is to make freely available a wide variety of basic, general information about Judaism, written from a traditional perspective in plain English. This web site has grown continually for more than 10 years and continues to be updated periodically. The information in this site is written predominantly from the Orthodox viewpoint, because I believe that is a good starting point for any inquiry into Judaism. As recently as 300 years ago, this was the only Judaism, and it still is the only Judaism in many parts of the world.

Buddhist Beliefs Explained Sangha is the word for the community of Buddhists; those people seeking enlightenment by practicing the Dharma. Buddha said that the only way to realize the Dharma was in community, so the Sangha is an important part of this process. So Buddhists take refuge by a respectful repeating of this word “Sangha”. Dhammapada, wrote sometime between 188-192 They go to many a refuge,to mountains, forests, parks, trees, and shrines:people threatened with danger.That's not the secure refuge,that's not the highest refuge,that's not the refuge, having gone to which, you gain release from all suffering and stress. The Myth of Persephone - Greek Goddess of the Underworld by Laura Strong, PhD One of the best known characters in the Slavic genre of folklore and fairytales is the deadly guardian of the Underworld, Baba Yaga. Usually found in the deepest darkest corner of the forest, she is commonly portrayed as a hideous old hag with razor sharp teeth who cannibalistically devours those who naively stumble upon her domain.

Buddhism: a diagram I created this diagram to assist my future posts on Buddhist themes. Below are links and texts to help explain the outline. It is my hope that this diagram aids the reader in visually organizing the dharma (the Buddha’s teachings) in a way that makes it easier to remember, question and discuss. After Effects Basic Training Welcome to Basic Training! In this Free Video Training Series, you'll learn everything you need to know to start using After Effects today. This is not an overview of the software, this is a real training series that covers advanced techniques for Motion Tracking, Color Keying and even 3D Title Design. Of course, we'll cover the basics too.

Guided Democracy in Indonesia Background[edit] In 1957, Indonesia faced a series of crises, including the beginning of the Permesta rebellion in Makassar and the army takeover of authority in South Sumatra. One of the demands of the Permesta rebels was that 70 percent of the members of Sukarno's proposed National Council should be members from the regions (non-Javanese). Buddhism: 11 Common Misunderstandings and Mistakes People believe many things about Buddhism that simply are incorrect. They think Buddhists want to get enlightened so they can be blissed out all the time. If something bad happens to you, it's because of something you did in a past life. Everybody knows that Buddhists have to be vegetarians. Unfortunately, much of what "everybody knows" about Buddhism isn't true.

Indonesia Indonesia ( The Indonesian archipelago has been an important trade region since at least the 7th century, when Srivijaya and then later Majapahit traded with China and India. Local rulers gradually absorbed foreign cultural, religious and political models from the early centuries CE, and Hindu and Buddhist kingdoms flourished. Indonesian history has been influenced by foreign powers drawn to its natural resources. Muslim traders brought the now-dominant Islam, while European powers brought Christianity and fought one another to monopolize trade in the Spice Islands of Maluku during the Age of Discovery. Following three and a half centuries of Dutch colonialism, Indonesia secured its independence after World War II.

History of East Timor East Timor is a country in Southeast Asia, officially known as Democratic Republic of Timor-Leste. The country comprises the eastern half of the island of Timor and the nearby islands of Atauro and Jaco. The first inhabitants are thought to be descendant of Australoid and Melanesian peoples. Southeast Asia Southeast Asia or Southeastern Asia is a subregion of Asia, consisting of the countries that are geographically south of China, east of India, west of New Guinea and north of Australia.[1] The region lies on the intersection of geological plates, with heavy seismic and volcanic activity. Southeast Asia consists of two geographic regions: The major religions are Islam, Buddhism and Taoism, followed by Christianity. However, a wide variety of religions are found throughout the region, including Hinduism and many animist-influenced practices.[3] Divisions[edit] A constructed map shows the diversity of every culture in Southeast Asia.

Re-imagining the grammar classics: Using the DO IT technique with gap fill exercises This is the second in a series of blog posts in which I’ll present a range of activities that can be used in class with minimal – or even no – preparation at all. Most of these activities revolve around reviewing or extending grammar structures, and as such are designed to be as flexible as possible and thus usable in many different situations. First up we looked at a way of personalizing gap fill exercises so that they work in a more meaningful and motivational way in your language class. This time I consider what to do when faced with making gap fills that we find in books more meaningful and how to inspire some creative thinking when completing them. What is DO IT? They like to DO IT, DO IT!