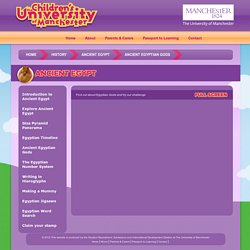 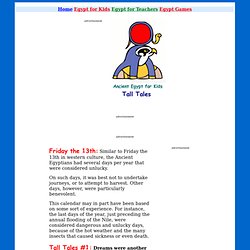 On such days, it was best not to undertake journeys, or to attempt to harvest. Other days, however, were particularly benevolent. This calendar may in part have been based on some sort of experience. The Ancient Egypt Site - Ancient Egypt From A To Z. Ancient Egypt: the Mythology - The Land of the Dead. The Seven Years' Famine. The Story of Isis and Osiris. In the days before Re had left the earth, before he had begun to grow old, his great wisdom told him that if the goddess Nut bore children, one of them would end his reign among men. 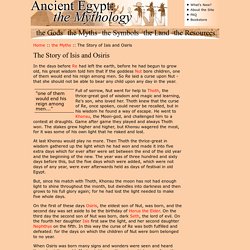 So Re laid a curse upon Nut - that she should not be able to bear any child upon any day in the year. "one of them would end his reign among men... " Full of sorrow, Nut went for help to Thoth, the thrice-great god of wisdom and magic and learning, Re's son, who loved her. Thoth knew that the curse of Re, once spoken, could never be recalled, but in his wisdom he found a way of escape. He went to Khonsu, the Moon-god, and challenged him to a contest at draughts.

At last Khonsu would play no more. But, since his match with Thoth, Khonsu the moon has not had enough light to shine throughout the month, but dwindles into darkness and then grows to his full glory again; for he had lost the light needed to make five whole days. When Osiris was born many signs and wonders were seen and heard throughout the world. The Myth of Osiris and Isis by Whitney Bayuk. 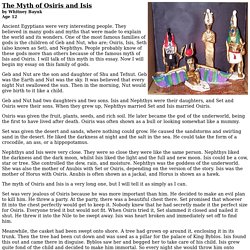 They believed in many gods and myths that were made to explain the world and its wonders. One of the most famous families of gods is the children of Geb and Nut, who are; Osiris, Isis, Seth (also known as Set), and Nephthys. People probably know of these gods more than others because of the famous myth of Isis and Osiris. I will talk of this myth in this essay. Now I will begin my essay on this family of gods.

The Story of Re. "there arose out of the darkness a great shining egg, and this was Re. 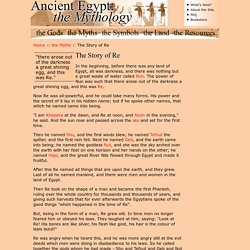 " In the beginning, before there was any land of Egypt, all was darkness, and there was nothing but a great waste of water called Nun. The power of Nun was such that there arose out of the darkness a great shining egg, and this was Re. Now Re was all-powerful, and he could take many forms. His power and the secret of it lay in his hidden name; but if he spoke other names, that which he named came into being. Gods and Goddesses. The Mummy Curse of Tutankhamun. The Mummy's Curse by Jimmy Dunn writing as John Warren When, in November of 1922, Howard Carter discovered the Tomb of Tutankhamun in the Valley of the Kings on the West Bank at Luxor, the world was really very different than it is today. 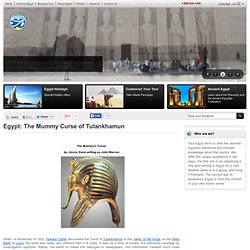 It was not a time of instant, live television coverage by investigative reporters. Rather, the world of media still belonged to newspapers, and information traveled much more slowly, and less reliably. It was a more superstitious time, and the media was fully adjusted to take advantage of the attribute to sell their publications. Egypt Pyramids Pharaohs Hieroglyphs - Mark Millmore's Ancient Egypt. The ancient Egyptians were possibly the first civilisation to practice the scientific arts. 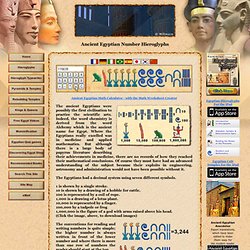 Indeed, the word chemistry is derived from the word Alchemy which is the ancient name for Egypt. Where the Egyptians really excelled was in medicine and applied mathematics. But although there is a large body of papyrus literature describing their achievements in medicine, there are no records of how they reached their mathematical conclusions. Of course they must have had an advanced understanding of the subject because their exploits in engineering, astronomy and administration would not have been possible without it. The Egyptians had a decimal system using seven different symbols. 1 is shown by a single stroke. 10 is shown by a drawing of a hobble for cattle. 100 is represented by a coil of rope. 1,000 is a drawing of a lotus plant. 10,000 is represented by a finger. 100,000 by a tadpole or frog 1,000,000 is the figure of a god with arms raised above his head.

NOVA Online/Pyramids—The Inside Story. Dress like an Egyptian. Sarcophagus - Free Clip Art - DK Books. Egyptian tomb adventure. Please note that unfortunately there is an error in this game. 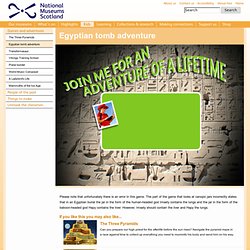 The part of the game that looks at canopic jars incorrectly states that in an Egyptian burial the jar in the form of the human-headed god Imsety contains the lungs and the jar in the form of the baboon-headed god Hapy contains the liver. However, Imsety should contain the liver and Hapy the lungs. If you like this you may also like... The Three Pyramids Can you prepare our high priest for the afterlife before the sun rises? Mummy Priest. Hieroglyphic Typewriter Egyptian Hieroglyphic Name Translator alphabet writer.