Aghori Sadhus. What kind of feelings does the word cannibalism arouses? 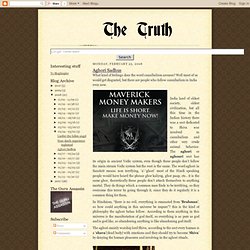 Well most of us would get disgusted, but there are people who follow cannibalism in even now. land of oldest society, oldest civilization, but all this time in the Indian history there was a sect dedicated to Shiva was involved in cannibalism and other very crude animal behavior. The aghori or aghouri sect has its origin in ancient Vedic system, even though these people don’t follow the main stream Vedic system but the root is the same. The word aghori in Sanskrit means non terrifying, ‘a’-‘ghori’ most of the Hindi speaking people would have heard the phrase ghor kaliyug, ghor paap, etc.. it is the same ghor, theoretically these people don’t attach themselves to anything mortal.

They do things which a common man finds to be terrifying, so they overcome this terror by going through it, since they do it regularly it is a common thing for them. Ghauri Shankar Mishra an aghori drinking liquor in a kapala(skull cup). Some stories. Devotion to Kali. Davor Rostuhar. Večernji List, September 2004 If somebody were to tell you stories about people who indulge in alcohol and drugs, who live in cemeteries, eat human flesh, and have sexual intercourse with corpses, you would definitely think that they are talking about some lunatic, Satanist, or at least mentally ill person. 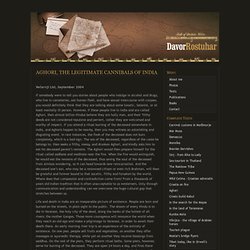 However, if these people live in India and are called Aghori, then almost billion Hindus believe they are holly men, and their 'filthy' deeds are not considered repulsive and pervert, rather they are welcomed and worthy of respect. If you attend a ritual burning of the deceased somewhere in India, and Aghoris happen to be nearby, then you may witness an astonishing and disgusting event. In rare instances, the flesh of the deceased does not burn completely, which is a bad sign. The son of the deceased, regardless of the caste he belongs to, then seeks a filthy, messy, and drunken Aghori, and kindly asks him to eat his deceased parent’s remains.

The night was falling upon Varanasi. Ganesha & Kartikeya. The Big Religion Comparison Chart: Compare World Religions. Hinduism and Islam, A Comparison of Beliefs and Practices. By Jayaram V Islam originated in the desert sands of Arabia as a reaction against prevailing native traditions based on the revelations received by Prophet Muhammad. 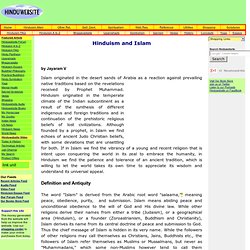 Hinduism originated in the temperate climate of the Indian subcontinent as a result of the synthesis of different indigenous and foreign traditions and in continuation of the prehistoric religious beliefs of lost civilizations. Although founded by a prophet, in Islam we find echoes of ancient Judo Christian beliefs, with some deviations that are unsettling for both. If in Islam we find the vibrancy of a young and recent religion that is intent upon conquering the world in its zeal to embrace the humanity, in Hinduism we find the patience and tolerance of an ancient tradition, which is willing to let the world takes its own time to appreciate its wisdom and understand its universal appeal. Definition and Antiquity Islam by all means is a religion founded by a prophet. Sources of Doctrine The Chief Practices 1. 2. 3. 4. 5. 6. 7. 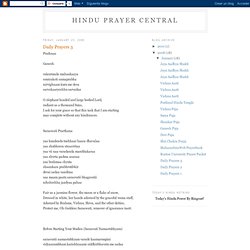 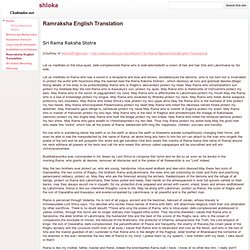 Let us meditate on Rama who has a sword in a receptacle and bow and arrows, whodestroyed the demons, who is not born but is incarnated to protect the world with hisactions.May the learned read the Rama Raksha Stotram , which destroys all sins and grantsall desires. (Begin listing details of the body to be protected)May Rama who is Raghu's descendant protect my head. May Rama who isDasharatha's son protect my forehead.May the lord Rama who is Kausalya's son, protect my eyes. May Rama who is thefavorite of Vishvamitra protect my ears. 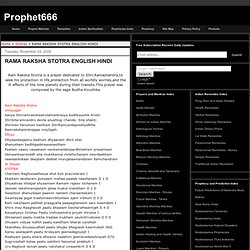