You need to learn Docker RIGHT NOW!! // Docker Containers 101. Pearltrees. Welcome. The Complete Guide To The Synaptic Package Manager. How to download Youtube video on linux using youtube-dl, Movgrab and ClipGrab. [Fixed] Can't Install, Trying to Dual Boot. See my reply for how it was fixed.I am trying to set up my PC to dual boot Windows 10 and linux mint. 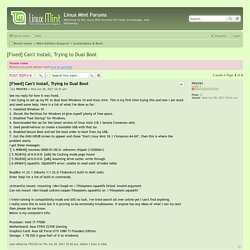 This is my first time trying this and now I am stuck and need some help. Here is a list of what I've done so far:1. Installed Windows 102. Shrunk the Partition for Windows to give myself plenty of free space.3. DistroWatch.com: Put the fun back into computing. Use Linux, BSD. Lightweight, fast, easier. How to install Linux Mint on your XP PC. Installing Linux Mint on a Windows 8.x PC with Secure Boot on can be a pain, but on an XP system it's easy. 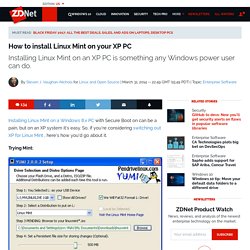 Learning the shell - Lesson 7: I/O Redirection. In this lesson, we will explore a powerful feature used by many command line programs called input/output redirection. 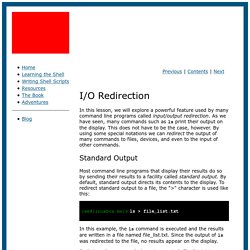 As we have seen, many commands such as ls print their output on the display. This does not have to be the case, however. By using some special notations we can redirect the output of many commands to files, devices, and even to the input of other commands. Standard Output Most command line programs that display their results do so by sending their results to a facility called standard output. The ultimate guide to Linux for Windows users. Updated: May 20, 2014 I have just realized that there is really no super-comprehensive guide on Windows versus Linux for new users, converts and those curious about migrating from their familiar world of Windows operating systems to the strange new constellation of Linux. 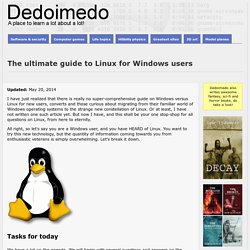 Ask Ubuntu. Overview. What is the Fedora Project? 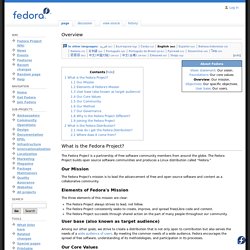 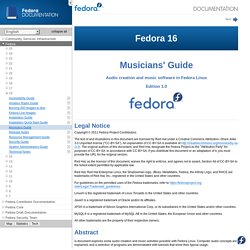 The text of and illustrations in this document are licensed by Red Hat under a Creative Commons Attribution–Share Alike 3.0 Unported license ("CC-BY-SA"). An explanation of CC-BY-SA is available at The original authors of this document, and Red Hat, designate the Fedora Project as the "Attribution Party" for purposes of CC-BY-SA. In accordance with CC-BY-SA, if you distribute this document or an adaptation of it, you must provide the URL for the original version. Red Hat, as the licensor of this document, waives the right to enforce, and agrees not to assert, Section 4d of CC-BY-SA to the fullest extent permitted by applicable law. Red Hat, Red Hat Enterprise Linux, the Shadowman logo, JBoss, MetaMatrix, Fedora, the Infinity Logo, and RHCE are trademarks of Red Hat, Inc., registered in the United States and other countries.

Linux® is the registered trademark of Linus Torvalds in the United States and other countries. Customizing Fedora 25 for Developers. I dusted off a 4 years old Lenovo ThinkCentre Edge 71z Tower desktop and Lenovo IdeaPad G400s notebook. 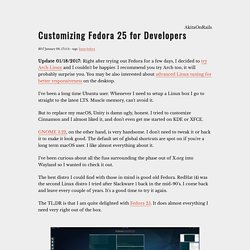 They are, respectivelly, a 2nd generation Core i5 SandyBridge 2.5Ghz and Core i3 2.4Ghz, with 8GB of RAM in the Tower and 4GB of RAM in the notebook. For a developer's routine, they are quite good enough. A better CPU wouldn't do a whole lot. I was very happy to see that this old tower has an old Intel graphics card with a DVI port.

Fortunatelly I had an old DVI-to-HDMI cable around and I was able to hook it up to my ultrawide LG monitor 21:9 (2560x180) and it properly scaled everything (macOS Sierra had a regression that required a hack to make it work!) Improving performance. This article provides information on basic system diagnostics relating to performance as well as steps that may be taken to reduce resource consumption or to otherwise optimize the system with the end-goal being either perceived or documented improvements to a system's performance. 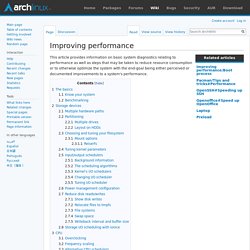 The basics Know your system The best way to tune a system is to target bottlenecks, or subsystems which limit overall speed. The system specifications can help identify them. If the computer becomes slow when large applications (such as LibreOffice and Firefox) run at the same time, check if the amount of RAM is sufficient. 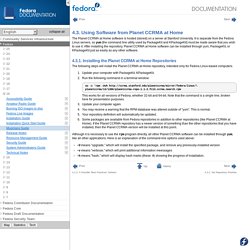 It is separate from the Fedora Linux servers, so yum (the command line utility used by PackageKit and KPackageKit) must be made aware that you wish to use it. After installing the repository, Planet CCRMA at Home software can be installed through yum, PackageKit, or KPackageKit just as easily as any other software. Linux Hardware Reviews, Performance Testing & Articles. KNOPPIX Linux Live CD. 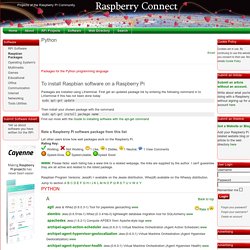 First get an updated package list by entering the following command in to LXterminal if this has not been done today sudo apt-get updateThen install your chosen package with the command sudo apt-get install package name Find out more with the Guide to installing software with the apt-get command Rate a Raspberry Pi software package from this list Let other users know how well packages work on the Raspberry Pi.