Convert an Android Device to Linux. Installing a regular Linux distribution on an Android device opens a whole new world of possibilities. 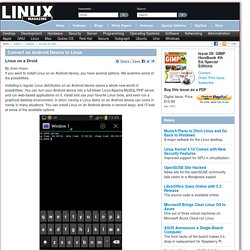 You can turn your Android device into a full-blown Linux/Apache/MySQL/PHP server and run web-based applications on it, install and use your favorite Linux tools, and even run a graphical desktop environment. In short, having a Linux distro on an Android device can come in handy in many situations. You can install Linux on an Android device in several ways, and I’ll look at some of the available options. Figure 1: KBOX is a miniature Linux distribution that doesn’t require rooting.

KBOX: No Root Required In many cases, installing Linux on Android usually means going through the rigmarole of rooting the Android system with the risk of bricking your Android device. KBOX is not available in the Google Play Store, so you have to download the APK package from the project’s website and install it manually. Dpkg -i /sdcard/Download/rsync_3.0.8_kbox.deb. 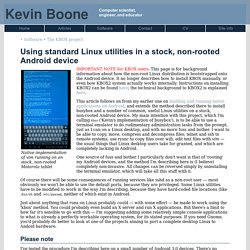 It no longer describes how to install KBOX manually, or even how KBOX2 system actually works internally. Instructions on installing KBOX2 can be found here; the technical background to KBOX2 is explained here. This article follows on from my earlier one on building and running native applications on Android, and extends the method described there to install busybox and a number of common, useful Linux utilities on a stock, non-rooted Android device. My main intention with this project, which I'm calling kbox ('Kevin's implementation of busybox'), is to be able to use a terminal emulator to do rudimentary administration tasks from the prompt, just as I can on a Linux desktop, and with no more fuss and bother. 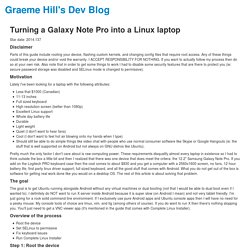 Any of these things could break your device and/or void the warranty. I ACCEPT RESPONSIBILITY FOR NOTHING. If you want to actually follow my process then do so at your own risk. Also note that in order to get some things to work I had to disable some security features that are there to protect you (ie: secure password storage was disabled and SELinux mode is changed to permissive). Motivation Lately I've been looking for a laptop with the following attributes: Pretty much the only factor I don't care about is raw computing power.

The goal The goal is to get Ubuntu running alongside Android without any virtual machines or dual booting (not that I would be able to dual boot even if I wanted to). Overview of the process Root the deviceSet SELinux to permissiveFix keyboard issuesRun Complete Linux Installer Step 1: Root the device. Varun's ScratchPad: [How to] Install Linux on Android? How to run Debian or Ubuntu GNU/Linux on your Android. Integrating GNU/Linux with Android The Matrix Way The most seamless way extending your Android device with a full blown GNU/Linux such as Debian (or Ubuntu) is running the Android system in a chroot environment in the Debian file system. 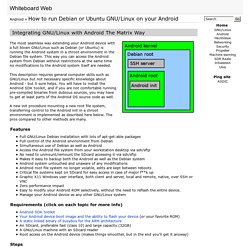 This way you can access the Android system from Debian without restrictions at the same time no modifications to the Android system itself are needed. This description requires general computer skills such as GNU/Linux but not necessary specific knowledge about Android - but it sure helps. You will have to install the Android SDK toolkit, and if you are not comfortable running pre-compiled binaries from dubious sources, you may have to get at least parts of the Android OS source code as well. A new init procedure mounting a new root file system, transferring control to the Android init in a chroot environment is implemented as described here below. Features Requirements (click on each topic for more info) Steps Partition the SDcard.