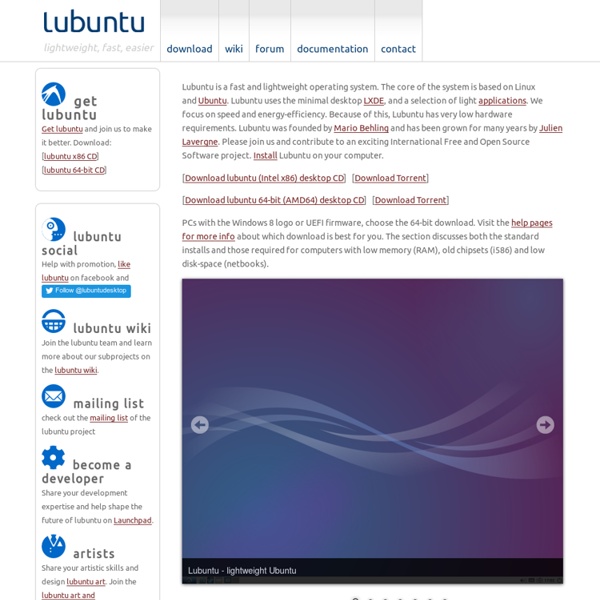 Julien Lavergne has released lubuntu 14.04. Lubuntu 14.04 is available here What is Lubuntu ? Lubuntu is a flavor of Ubuntu based on the Lightweight X11 Desktop Environment (LXDE), as its default GUI. The goal is to provide a very lightweight distribution, with all the advantages of the Ubuntu world (repositories, support, etc.). Lubuntu is targeted at "normal" PC and laptop users running on low-spec hardware.

How to install Linux Mint on your XP PC Installing Linux Mint on a Windows 8.x PC with Secure Boot on can be a pain, but on an XP system it's easy. So, if you're considering switching out XP for Linux Mint , here's how you'd go about it. Trying Mint: Puppy Linux These are extraordinary goals, yet Puppy comes close to achieving them all. The fundamental reason is that Puppy has been built from scratch, file-by-file, and is not based on any other Linux distribution. One of the most amazing features of Puppy is the range of powerful applications yet such tiny size ...and the speed. PC-BSD , or , is a Unix-like , desktop-oriented operating system built upon the most recent releases of FreeBSD . It aims to be easy to install by using a graphical installation program, and easy and ready-to-use immediately by providing KDE SC as the pre-installed graphical user interface . It provides official binary nVidia and Intel drivers for hardware acceleration and an optional 3D desktop interface through Kwin , and Wine is ready-to-use in running Microsoft Windows software. PC-BSD is able to run Linux software, in addition to FreeBSD ports, and it has its own PBI package management system that allows users to graphically install pre-built software packages from a single downloaded executable file, which is unique for BSD operating systems. PC-BSD supports ZFS , and the installer offers disk encryption with geli so the system will require a passphrase before booting.

Get Edubuntu The Edubuntu development team recommends the use of the Long Term Support releases for users who don't require the latest version of their software. The latest Long Term Support release is Edubuntu 12.04.4 LTS and can be found here: For those users who like to have the latest version of the software and don't mind being a bit on the bleeding edge, the latest Edubuntu 13.10 release can be found here: The ultimate guide to Linux for Windows users Updated: May 20, 2014 I have just realized that there is really no super-comprehensive guide on Windows versus Linux for new users, converts and those curious about migrating from their familiar world of Windows operating systems to the strange new constellation of Linux. Or at least, I have not written one such article yet.

About FreeBSD What is FreeBSD? FreeBSD is an operating system for a variety of platforms which focuses on features, speed, and stability. It is derived from BSD, the version of UNIX® developed at the University of California, Berkeley. It is developed and maintained by a large community. Cutting edge features Universal USB Installer – Easy as 1 2 3 Universal USB Installer aka UUI is a Live Linux Bootable USB Creator that allows you to choose from a selection of Linux Distributions to put on your USB Flash Drive. The Universal USB Installer is easy to use. Simply choose a Live Linux Distribution, the ISO file, your Flash Drive and, Click Install.

Never touched Open Solaris, probably never will... I'm sticking to my config-file-orientated slackware. Get one of those up and running (takes a lot of headaches) and you'll never have to touch it again. by taranasus Jun 20

Nope, not that much of a linux geek but i like tot play with a distro from time to time. If you ask me i rather use slackware any day of the week. by taranasus Jun 20