6 Linux Distros Designed for Artists, Musicians and Editors. Advertisement If I had a dollar for every person who told me they’re switching to Linux because it’s free, I could buy a few copies of Windows 10. 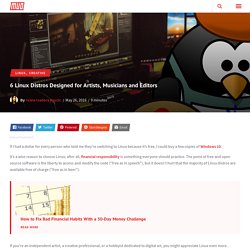 Fedora Design Suite: Best of the Basics. 7 Reasons Why You Should Install The Fish Shell. Perhaps what drives so many people to install Linux is that it’s so ridiculously customizable. 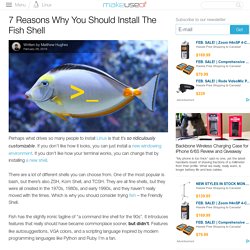 If you don’t like how it looks, you can just install a new windowing environment. If you don’t like how your terminal works, you can change that by installing a new shell. There are a lot of different shells you can choose from. VDesk Animation Wallpapers on Ubuntu 11.10 Oneiric Ocelot/Fedora/Linux Mint/Other Ubuntu Versions. Get More From Your Battery With Jupiter [Linux] Get better battery life from your Linux laptop. 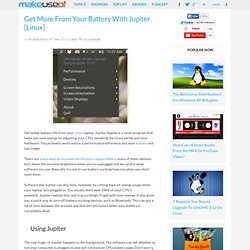 Jupiter Applet is a small program that helps you save energy by adjusting your CPU, tweaking the Linux kernel and your hardware. You probably won’t notice a performance difference, but your battery will last longer. There are many ways to increase the life your laptop battery, many of them obvious: turn down the monitor brightness when you’re unplugged and be careful what software you use. Basically, try not to use battery-sucking features when you don’t need them. Software like Jupiter can also help, however, by cutting back on energy usage when your laptop isn’t plugged in. Using Jupiter The real magic of Jupiter happens in the background. The tray icon, shown above as an Ubuntu applet, lets you manually configure Jupiter’s tweaks whenever you want. Bring Back Ubuntu’s Old Menu With ClassicMenu Applet. Love Ubuntu, but find yourself infuriated by the lack of a traditional menu? 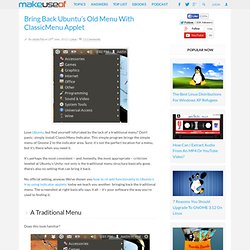 Don’t panic: simply install ClassicMenu Indicator. This simple program brings the simple menu of Gnome 2 to the indicator area. Sure: it’s not the perfect location for a menu, but it’s there when you need it. It’s perhaps the most consistent – and, honestly, the most appropriate – criticism leveled at Ubuntu’s Unity: not only is the traditional menu structure basically gone, there’s also no setting that can bring it back. No official setting, anyway. Command line tricks for smart geeks. Everyone knows the answer to the question of life, the universe and everything is "42", but for the first time we can reveal the question. 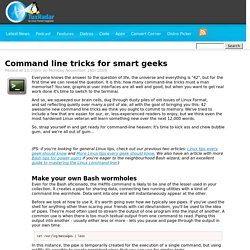 It is this: how many command-line tricks must a man memorise? You see, graphical user interfaces are all well and good, but when you want to get real work done it's time to switch to the terminal. And so, we squeezed our brain cells, dug through dusty piles of old issues of Linux Format, and sat reflecting quietly over many a pint of ale, all with the goal of bringing you this: 42 awesome new command line tricks we think you ought to commit to memory.

We've tried to include a few that are easier for our, er, less-experienced readers to enjoy, but we think even the most hardened Linux veteran will learn something new over the next 12,000 words. So, strap yourself in and get ready for command-line heaven: it's time to kick ass and chew bubble gum, and we're all out of gum... Make your own Bash wormholes cat /var/log/messages | less Remote control MPlayer . . Linux. Chegou o Netbeans 8, um dos melhores IDEs para programação. 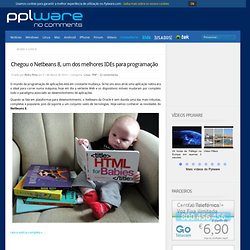 4 Strange And Disturbing Linux Distros You Probably Won’t Be Installing. Linux is the operating system of choice for those who decide to go their own way. 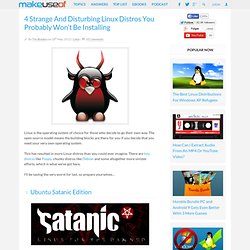 The open source model means the building blocks are there for you if you decide that you need your very own operating system. This has resulted in more Linux distros than you could ever imagine. There are tiny distros like Puppy, chunky distros like Debian and some altogether more sinister efforts, which is what we’ve got here. I’ll be saving the very worst for last, so prepare yourselves… Ubuntu Satanic Edition The distro of choice for satanists the world over, Ubuntu Satanic Edition is proof that there’s an Ubuntu distro for everyone.