Free music composition and notation software. Confounded Technology: Ubuntu 12.04 & iOS6 AirPrint without a true AirPrint compatible device (Update) This is an update of my previous AirPrint escapade to get AirPrint working with Ubuntu 12.04 and iOS6.0 using non AirPrint printers. 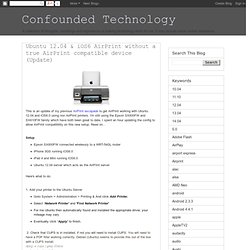 I'm still using the Epson SX600FW and SX610FW family which have both been great to date, I spent an hour updating the config to allow AirPrint compatibility on this new setup. Read on... Setup Epson SX600FW connected wirelessly to a WRT-54GL routeriPhone 3GS running iOS6.0iPad 4 and Mini running iOS6.0 Ubuntu 12.04 server which acts as the AirPrint serverHere's what to do:1. Add your printer to the Ubuntu ServerGoto System > Administration > Printing & And click Add Printer.Select ‘Network Printer’ and 'Find Network Printer'For me Ubuntu then automatically found and installed the appropriate driver, your mileage may varyEventually click ‘Apply’ to finish. 2. Single Machine Guide - DevStack. Use the cloud to build the cloud! 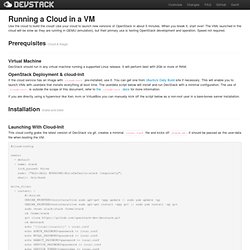 Use your cloud to launch new versions of OpenStack in about 5 minutes. When you break it, start over! The VMs launched in the cloud will be slow as they are running in QEMU (emulation), but their primary use is testing OpenStack development and operation. Speed not required. Virtual Machine DevStack should run in any virtual machine running a supported Linux release. OpenStack Deployment & cloud-init If the cloud service has an image with cloud-init pre-installed, use it. If you are directly using a hypervisor like Xen, kvm or VirtualBox you can manually kick off the script below as a non-root user in a bare-bones server installation. How to import and export a MySQL database. How to import and export a MySQL database This article describes how to import and export a MySQL database. 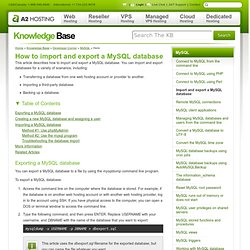 You can import and export databases for a variety of scenarios, including: The rEFInd Boot Manager. By Roderick W. 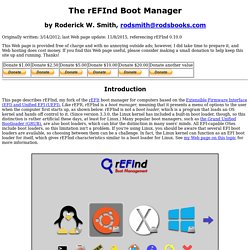 Smith, rodsmith@rodsbooks.com Originally written: 3/14/2012; last Web page update: 11/8/2015, referencing rEFInd 0.10.0 This Web page is provided free of charge and with no annoying outside ads; however, I did take time to prepare it, and Web hosting does cost money. If you find this Web page useful, please consider making a small donation to help keep this site up and running. Thanks! Introduction This page describes rEFInd, my fork of the rEFIt boot manager for computers based on the Extensible Firmware Interface (EFI) and Unified EFI (UEFI). In theory, EFI implementations should provide boot managers. I decided to fork the earlier rEFIt project because, although rEFIt is a useful program, it's got several important limitations, such as poor control over the boot loader detection process and an ability to display at most a handful of boot loader entries on its main screen. 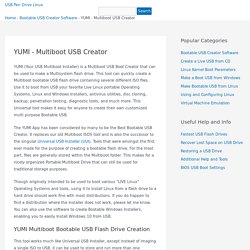 SoGo - Open Source Groupware. OpenChange Project - Alternative to Microsoft Exchange. Review: LiveCode Community is open-source HyperCard for the 21st century. Many years ago, there was HyperCard, included free with the Macintosh in the late 1980s. 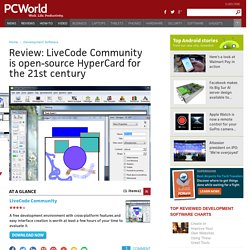 It got a lot of attention because it was one of the first tools that made it trivial to create GUI applications. Apple couldn't figure out how to properly market or position it, so it eventually died of apathy. RunRev has been publishing Revolution, now named LiveCode, as a spiritual successor to Hypercard, for a while, and LiveCode now shares one more important trait with Hypercard: It's now free. LiveCode Community Edition is the free, open-source, implementation of LiveCode. It has virtually all the features of the commercial edition, with one major exception: All apps created with it must be open-source. LiveCode applications are based on the concepts of "stacks," with each stack containing one or more "cards," and each card containing a mix of shared items (such as background images and fields) and unique items (such as text in a field, or a control which appears on only one card. Create apps for multiple platforms. Quickly. Easily. Free. 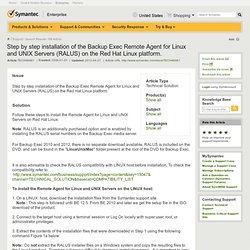 For Backup Exec 2010 and 2012, there is no separate download available, RALUS is included on the DVD, and can be found in the "LinuxUnixMac" folder present at the root of the DVD for Backup Exec. Note : This step is followed until BE 12.5. From BE 2010 and later we get the setup file in the ISO download of the product.