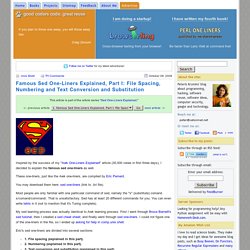 These one-liners, just like the Awk one-liners, are compiled by Eric Pement. You may download them here: sed one-liners (link to .txt file). Most people are only familiar with one particular command of sed, namely the "s" (substitute) comand. s/comand/command/. That is unsatisfactory. Sed has at least 20 different commands for you. My sed learning process was actually identical to Awk learning process. (1) What are some time-saving tips that every Linux user should know? Spark by holman. Sparklines for your shell See? 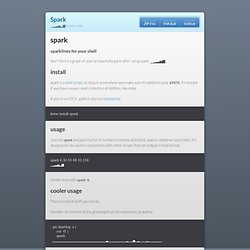 Here's a graph of your productivity gains after using spark: ▁▂▃▅▇ install spark is a shell script, so drop it somewhere and make sure it's added to your $PATH. It's helpful if you have a super-neat collection of dotfiles, like mine. If you're on OS X, spark is also on Homebrew: brew install spark usage Just run spark and pass it a list of numbers (comma-delimited, spaces, whatever you'd like).

Linux Commands - A practical reference. How to edit and understand /etc/fstab. DragonFly BSD. Please keep in mind that major modifications have been made to nearly the entire DragonFly kernel relative to the original FreeBSD-4.x fork. 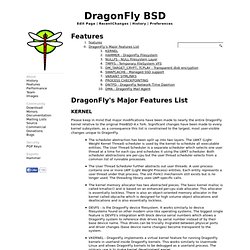 Significant changes have been made to every kernel subsystem, as a consequence this list is constrained to the largest, most user-visible changes unique to DragonFly. The scheduler abstraction has been split up into two layers. The LWKT (Light Weight Kernel Thread) scheduler is used by the kernel to schedule all executable entities. The User Thread Scheduler is a separate scheduler which selects one user thread at a time for each cpu and schedules it using the LWKT scheduler.

Replacing text in multiple files is really easy with Vim. 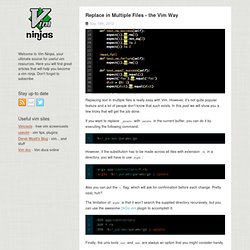 However, it’s not quite popular feature and a lot of people don’t know that such exists. In this post we will show you a few tricks that will get the job done. If you want to replace _params with params in the current buffer, you can do it by executing the following command: However, if the substitution has to be made across all files with extension .rb in a directory, you will have to use argdo: Also you can put the c flag, which will ask for confirmation before each change. The limitation of argdo is that it won’t search the supplied directory recursively, but you can use the awesome DirDo.vim plugin to accomplish it: Finally, the unix tools sed and awk are always an option that you might consider handy. About the author Veselin Todorov is a software consultant focused on testing, code quality and building awesome products. 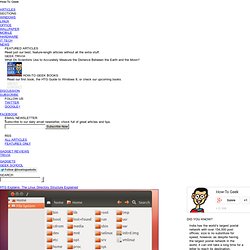 The C:\ drive and drive letters are gone, replaced by a / and cryptic-sounding directories, most of which have three letter names. The Filesystem Hierarchy Standard (FHS) defines the structure of file systems on Linux and other UNIX-like operating systems. However, Linux file systems also contain some directories that aren’t yet defined by the standard. / – The Root Directory Everything on your Linux system is located under the / directory, known as the root directory. View topic - Compiz plugins. Hi danielduner I can't tell you exactly how to solve your problem, but I can tell you how I got compiz runing on Linux Mint 13.

First of all, I installed compiz, compiz-fusion* and compizconfig-settings-manager. Then I went to the configuration manager (I think it's gconf) and changed "windowmanager" from "marco" to "compiz" under "/desktop/mate/session/required_components/". In the compiz-settings i enabled composite, opengl, gnome compatibility, window decorations, scale window, move window, grid and put. How to activate Compiz in Mint 13 Maya MATE. Put the fun back into computing. Use Linux, BSD. Remastersys. SettingUpConky. Discussion of this wiki can be found here This guide will step you through initial installation and configuration of Conky for Ubuntu. 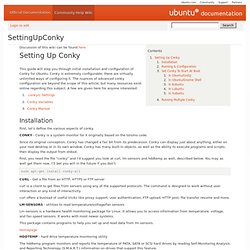 Conky is extremely configurable; there are virtually unlimited ways of configuring it. The nuances of advanced conky configuration are beyond the scope of this article, but many resources exist online regarding this subject. A few are given here for anyone interested: Installation First, let's define the various aspects of conky. CONKY - Conky is a system monitor for X originally based on the torsmo code. Since its original conception, Conky has changed a fair bit from its predecessor. First, you need the file "conky" and I'd suggest you look at curl, lm-sensors and hddtemp as well, described below. 10 things to do after installing Linux Mint 13.

Linux Mint 13 just got released and I have been using it (MATE edition) on my laptop for nearly a week and from my experience, this is a very nice and stable release. 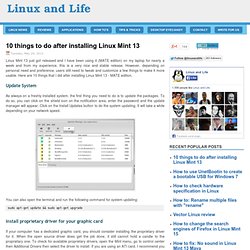 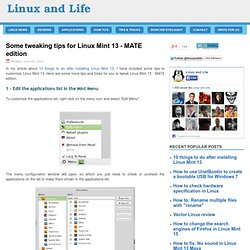