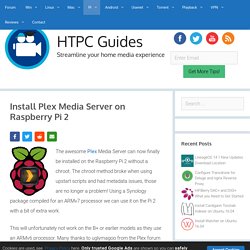 The chroot method broke when using upstart scripts and had metadata issues, those are no longer a problem! Using a Synology package compiled for an ARMv7 processor we can use it on the Pi 2 with a bit of extra work. This will unfortunately not work on the B+ or earlier models as they use an ARMv6 processor. Many thanks to uglymagoo from the Plex forum who identified the package that could be used without a chroot on the Raspberry Pi 2. I used a minimal Raspbian distribution Minibian for this guide, when you are done Plex will also autostart on boot. March 2016 Update: Jessie Image posted compatible with Raspberry Pi 2 and Pi 3 Previous Update: Method 3 for early Plex releases now working with Jessie Image Updated August 2015 to version 6 with Minibian Jessie with Kernel 4.1 and Plex 0.9.12.8 (if you experience issues use this image use the installer) Installation Checklist Generate Locales wget.

How to Turn a Raspberry Pi into a Low-Power Network Storage Device. Mix together one Raspberry Pi and a sprinkle of cheap external hard drives and you have the recipe for an ultra-low-power and always-on network storage device. 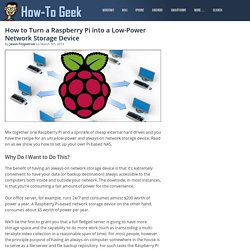 Read on as we show you how to set up your own Pi-based NAS. Why Do I Want to Do This? The benefit of having an always-on network storage device is that it’s extremely convenient to have your data (or backup destination) always accessible to the computers both inside and outside your network. The downside, in most instances, is that you’re consuming a fair amount of power for the convenience.

Our office server, for example, runs 24/7 and consumes almost $200 worth of power a year. We’ll be the first to grant you that a full fledged server is going to have more storage space and the capability to do more work (such as transcoding a multi-terabyte video collection in a reasonable span of time). What Do I Need? In addition to the gear you’ll need from the Getting Started with Raspberry Pi tutorial, you’ll only the following hardware: 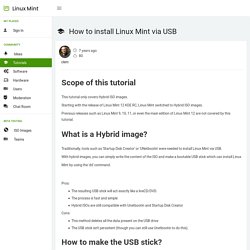 Pros: The resulting USB stick will act exactly like a liveCD/DVD. Cons: This method deletes all the data present on the USB drive The USB stick isn't persistent (though you can still use Unetbootin to do this). Using mintStick mintStick is installed by default in Linux Mint. Launch "USB Image Writer" from the menu, select your ISO image and your USB device and press "Write to device". How to Install Cinnamon 3.0 On Ubuntu 16.04 LTS. As you all already know that Ubuntu 16.04 LTS is out there so today we will come to know how we can install & work with Cinnamon 3.0 on our Ubuntu 16.04 LTS Linux distribution. 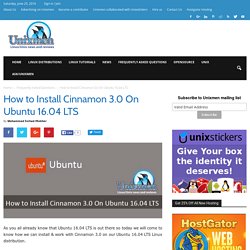 Lets start then. Ubuntu is a Debian-based Linux operating system and widely used for personal computers, smartphones and various network servers and one of the most famous Linux distribution now a days. It is based on free software. Ubuntu has always been free to download, use and share. It has both Desktop & Server editions. Ubuntu comes with everything you need to run your organisation, school, home or enterprise. Ubuntu is backed by Canonical.

How to read and write HFS+ journaled external HDD in Ubuntu without access to OS X? How To Use SSHFS to Mount Remote File Systems Over SSH. Introduction. 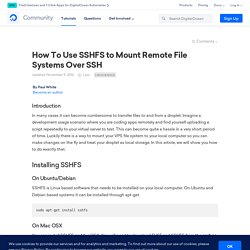 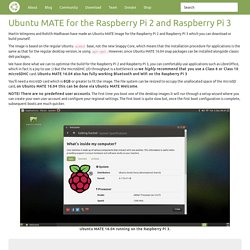 The image is based on the regular Ubuntu armhf base, not the new Snappy Core, which means that the installation procedure for applications is the same as that for the regular desktop version, ie using apt-get. However, since Ubuntu MATE 16.04 snap packages can be installed alongside classic deb packages. About - awesome window manager. Manjaro Linux – Enjoy the simplicity. Put the fun back into computing. Use Linux, BSD. LiVES Video Editing System - Because the media should be open. OSBoxes - Virtual Machines for VirtualBox & VMware. Ubuntu/Linux News, Reviews, Tutorials, Apps.