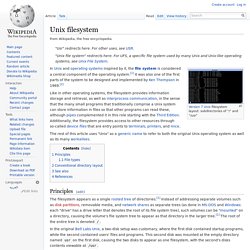 For UFS, a specific file system used by many Unix and Unix-like operating systems, see Unix File System. In Unix and operating systems inspired by it, the file system is considered a central component of the operating system.[1] It was also one of the first parts of the system to be designed and implemented by Ken Thompson in 1969.[2] The rest of this article uses "Unix" as a generic name to refer to both the original Unix operating system as well as its many workalikes. Principles[edit] In the original Bell Labs Unix, a two-disk setup was customary, where the first disk contained startup programs, while the second contained users' files and programs. Unix directories do not "contain" files. File types[edit] BSD also added symbolic links to the range of file types, which are files that refer to other files, and complement hard links.[3] Other Unix systems may support additional types of files.[4] 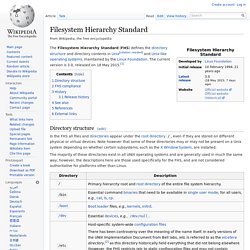 The current version is 3.0, released on 18 May 2015.[1] Directory structure[edit] The majority of these directories exist in all UNIX operating systems and are generally used in much the same way; however, the descriptions here are those used specifically for the FHS, and are not considered authoritative for platforms other than Linux. FHS compliance[edit] Most Linux distributions follow the Filesystem Hierarchy Standard and declare it their own policy to maintain FHS compliance.[9][10][11][12] GoboLinux is an example of an intentionally non-compliant filesystem implementation.[13] Some distributions that generally follow the standard deviate from it in some areas.

Linux Directory Structure (File System Structure) Explained with Examples. By Ramesh Natarajan on September 8, 2010 Have you wondered why certain programs are located under /bin, or /sbin, or /usr/bin, or /usr/sbin? 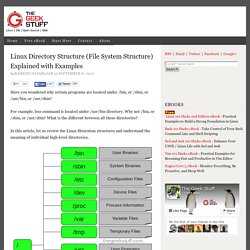 For example, less command is located under /usr/bin directory. Why not /bin, or /sbin, or /usr/sbin? What is the different between all these directories? In this article, let us review the Linux filesystem structures and understand the meaning of individual high-level directories. 1. / – Root Every single file and directory starts from the root directory.Only root user has write privilege under this directory.Please note that /root is root user’s home directory, which is not same as /. 2. Contains binary executables.Common linux commands you need to use in single-user modes are located under this directory.Commands used by all the users of the system are located here.For example: ps, ls, ping, grep, cp. 3. e4defrag - online defragmenter for ext4 filesystem. Ubuntu manuals precise (8) e4defrag.8.gz Provided by: e2fsprogs_1.42-1ubuntu2_i386 e4defrag - online defragmenter for ext4 filesystem e4defrag [ -c ] [ -v ] target ... e4defrag reduces fragmentation of extent based file. 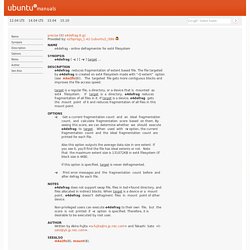 The file targeted by e4defrag is created on ext4 filesystem made with "-O extent" option (see mke2fs(8)). -c Get a current fragmentation count and an ideal fragmentation count, and calculate fragmentation score based on them. e4defrag does not support swap file, files in lost+found directory, and files allocated in indirect blocks. Written by Akira Fujita <a-fujita@rs.jp.nec.com> and Takashi Sato <t- sato@yk.jp.nec.com>. mke2fs(8), mount(8).

Powered by the Ubuntu Manpage Repository generator maintained by Dustin Kirkland © 2010 Canonical Ltd. /dev/zero. /dev/zero is a special file in Unix-like operating systems that provides as many null characters (ASCII NUL, 0x00) as are read from it.[1] One of the typical uses is to provide a character stream for initializing data storage.[2] Function[edit] Read operations from /dev/zero return as many null characters (0x00) as requested in the read operation. 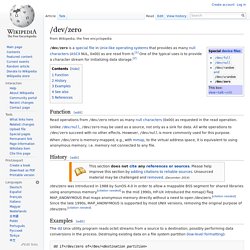 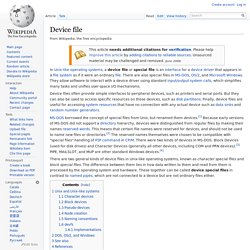 The difference between them lies in how data written to them and read from them is processed by the operating system and hardware. These together can be called device special files in contrast to named pipes, which are not connected to a device but are not ordinary files either. Unix and Unix-like systems[edit] As with other special file types, the computer system accesses device nodes using standard system calls and treats them like regular computer files. Two standard types of device files exist; unfortunately their names are, for historical reasons, rather counter-intuitive, and explanations of the difference between the two are often incorrect as a result.