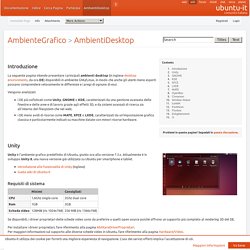 Attualmente è in sviluppo Unity 8, una nuova versione già utilizzata su Ubuntu per smartphone e tablet. Requisiti di sistema Per installare i driver proprietari, fare riferimento alla pagina AbilitareDriverProprietari. Six Popular Linux Desktop Environments. Unlike Windows and OS X, Linux allows you to fully customize not only the look and feel of your desktop, but also its functionality and settings, thanks to a host of desktop environments it offers. 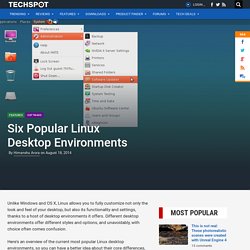 Different desktop environments offer different styles and options, and unavoidably, with choice often comes confusion. Here's an overview of the current most popular Linux desktop environments, so you can have a better idea about their core differences, what each has to offer and what could potentially suit you best. Gnome Gnome, which stands for GNU Network Object Model Environment, is one of the oldest and most widely used Linux desktop environments. Its design goals include simplicity, accessibility, and ease of internationalization and localization. The project was initiated in August 1997 by Miguel de Icaza and Federico Mena as a reaction against KDE.

Pros: The interface is fast; Supports a lot of keyboard shortcuts. Cinnamon. How to Choose the Best Linux Desktop for You. With Linux comes choice. 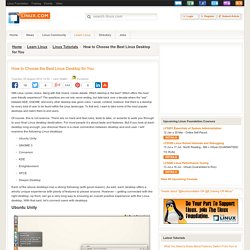 Along with that choice, comes debate. Ubuntu Flavors Comparison: Ubuntu 15.10 vs Kubuntu 15.10 vs Ubuntu GNOME 15.10. Ubuntu comes with a couple of different flavors which are largely defined by the desktop environment that’s included in the each flavor, and by the default set of software applications included, to some extent. 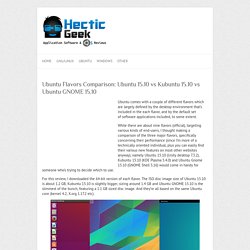 While there are about nine flavors (official), targeting various kinds of end-users, I thought making a comparison of the three major flavors, specifically concerning their performance (since I’m more of a technically oriented individual, plus you can easily find their various new features on most other websites anyway), namely Ubuntu 15.10 (Unity desktop 7.3.2), Kubuntu 15.10 (KDE Plasma 5.4.0) and Ubuntu Gnome 15.10 (GNOME Shell 3.16) would come in handy for someone who’s trying to decide which to use.

For this review, I downloaded the 64-bit version of each flavor. The ISO disc image size of Ubuntu 15.10 is about 1.2 GB, Kubuntu 15.10 is slightly bigger, sizing around 1.4 GB and Ubuntu GNOME 15.10 is the slimmest of the bunch, featuring a 1.1 GB sized disc image. Boot-Up Speed… 2015 Desktop Environment roundup. Figure 7: Unity on Ubuntu 14.04 Ubuntu’s Unity desktop is probably familiar to anyone who has gotten into Linux over the last couple years; it’s typically the first stop for new Linux users. 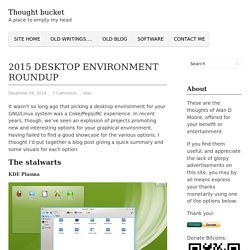 Unity takes inspiration from OSX, with its dock and global menus, while maintaining a few unique features of its own. 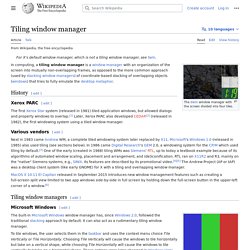 To tile windows, the user selects them in the taskbar and uses the context menu choice Tile Vertically or Tile Horizontally. The Windows 8 UI introduced a new basic tiling window manager. History[edit] X Window System[edit] wmii with a number of terminals open.

Deepin Desktop. What are the best Linux desktop environments? - Slant. What is minimum System Requirements for Linux(DESKTOP) OS to install ? Untitled. When deciding between Fluxbox and pekWM (and indeed really for any WM but more so here) it really boils down to user needs and wants. 1.) 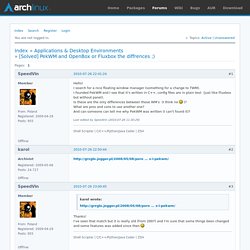 Fluxbox seems to be faster and lighter than pekWM so if you are going for a lighter system, fluxbox may be better for you. However pekWM really isn't much heavier at all. 2.) Fluxbox has it's own panel and the "slit". 3.) 4.) 5.) 6.) pekWM has auto-properties. 7.) 8.) 9.) So in summary it is really up to you. pekWM is a love it or hate it kind of thing. Therefore, it may serve you best to try on both pair of shoes and see which on fits best.

Legends of Nor'Ova - role playing community devoted to quality forum-based and table-top role play, home of the Legends of Nor'Ova Core Rule Book and Legends of Nor'Ova: Saga of Ablution steam punk like forum based RPG. Top 10 Best Linux Desktop Environments (2015) With so many different Linux desktop environments out there, it can be hard to choose one, especially if you’re a beginner or a user who is just switching from Windows. 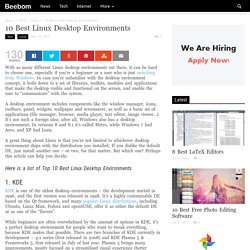 In case you’re unfamiliar with the desktop environment concept, it boils down to a set of libraries, toolkits, modules and applications that make the desktop visible and functional on the screen, and enable the user to “communicate” with the system. A desktop environment includes components like the window manager, icons, toolbars, panel, widgets, wallpaper and screensaver, as well as a basic set of applications (file manager, browser, media player, text editor, image viewer…). It’s not such a foreign idea; after all, Windows also has a desktop environment. In versions 8 and 8.1 it’s called Metro, while Windows 7 had Aero, and XP had Luna. A great thing about Linux is that you’re not limited to whichever desktop environment ships with the distribution you installed. Attenction. Memory consumption of Linux desktop environments. Note Updated on June 3rd 2014 and now includes LXQt and Unity. 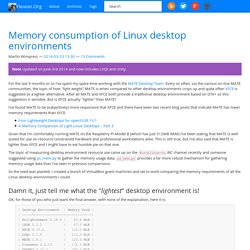 For the last 9 months or so I've spent my spare time working with the MATE Desktop Team. Every so often, via the various on-line MATE communities, the topic of how "light weight" MATE is when compared to other desktop environments crops up and quite often XFCE is suggested as a lighter alternative. After all MATE and XFCE both provide a traditional desktop environment based on GTK+ so this suggestion is sensible. But is XFCE actually "lighter" than MATE? I've found MATE to be (subjectively) more responsive that XFCE and there have been two recent blog posts that indicate MATE has lower memory requirements than XFCE.

Given that I'm comfortably running MATE on the Raspberry Pi Model B (which has just 512MB RAM) I've been stating that MATE is well suited for use on resource constrained hardware and professional workstations alike. Desktop Environments for Linux. Xfce Less resource-hungry than GNOME or KDE, Xfce is a great choice for older computers and it is still a full-fledged desktop environment that offers a great deal to the user. 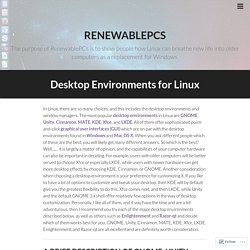 In my opinion, Xfce provides a nice balance between functionality and conservation of system resources, while still having a beautiful desktop. In its default appearance, Xfce very much resembles Mac OS X with its dock-like panel found at the bottom of the desktop. Users can drag their favorite applications from the menu (found on the left side of the upper panel) and place them on the bottom dock/panel in a similar manner as can be done in Mac OS X. Nautilus (software)