Shell. Linux device driver Archives - TutorialsDaddy. Libsoundio: cross-platform audio input and output. A garbage collector for C and C++ Hard and Symbolic Links. In this episode, I wanted to talk about the differences between hard and symbolic links. 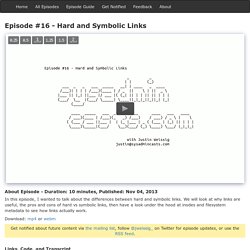 We will look at why links are useful, the pros and cons of hard vs symbolic links, then have a look under the hood at inodes and filesystem metadata to see how links actually work. Links in general serve the very useful function of acting as an alias or shortcut to a particular file or directory. We are all familiar with creating desktop shortcuts, well symbolic links are very similar to this, basically, we create a symbolic link that acts as a pointer to the real file, which in turn points to the data on the disk. As you can see in the diagram here, we have created a firefox symbolic link, from our desktop, which points to user bin firefox file. Personally, I find symbolic link intuitive and easy to understand. So, what about hard links? Lets look as some real life examples. Man ln.

Learn C The Hard Way. Let's get familiar with more things you can do with variables by declaring various ints, floats, chars, and doubles. 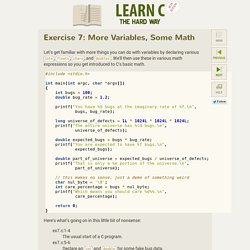 Linux-insides/interrupts-1.md at master · 0xAX/linux-insides. Often Overlooked Linux OS Tweaks. There are two simple linux OS level settings that people seem to be overlooking setting correctly on their production systems I have seen. 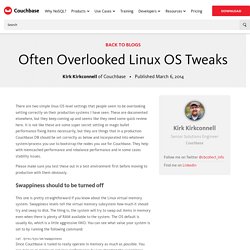 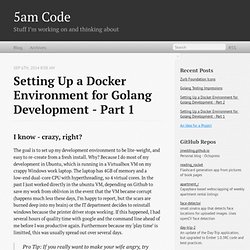 The goal is to set up my development environment to be lite-weight, and easy to re-create from a fresh install. Why? Because I do most of my development in Ubuntu, which is running in a Virtualbox VM on my crappy Windows work laptop. The laptop has 4GB of memory and a low-end dual-core CPU with hyperthreading, so 4 virtual cores. In the past I just worked directly in the ubuntu VM, depending on Github to save my work from oblivion in the event that the VM became corrupt (happens much less these days, I’m happy to report, but the scars are burned deep into my brain) or the IT department decides to reinstall windows because the printer driver stops working. Paperman.patricklorio.com. Paradoxxxzero/butterfly · GitHub.

Build a Killer Customized Arch Linux Installation (and Learn All About Linux in the Process) Desktop: Your Desktop over ssh running inside of a Docker container. A Docker Dev Environment in 24 Hours! (Part 2 of 2) - RelateIQ Blog : RelateIQ Blog. Rogaha/docker-desktop. File - Docker Documentation. Docker can build images automatically by reading the instructions from a Dockerfile. 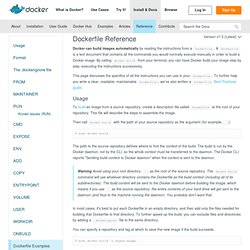 A Dockerfile is a text document that contains all the commands you would normally execute manually in order to build a Docker image. By calling docker build from your terminal, you can have Docker build your image step by step, executing the instructions successively. This page discusses the specifics of all the instructions you can use in your Dockerfile. To further help you write a clear, readable, maintainable Dockerfile, we've also written a Dockerfile Best Practices guide. Usage To build an image from a source repository, create a description file called Dockerfile at the root of your repository. Then call docker build with the path of your source repository as the argument (for example, $ sudo docker build .

The path to the source repository defines where to find the context of the build. Warning Avoid using your root directory, /, as the root of the source repository. Format. Docker/Dockerfile at master · mekahell/docker · GitHub. Managing Application Code in Linux Containers. Many developers have heard of Linux containers and Docker. 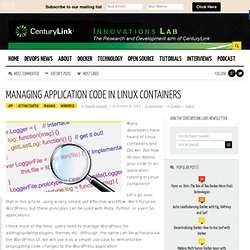 But how do you deploy your code to an application running in Linux containers? Let’s go over that in this article, using a very simple yet effective workflow. We’ll focus on WordPress, but these principles can be used with Ruby, Python, or even Go applications. I think most of the time, users need to manage WordPress for adding/updating plugins, themes etc. Although, the same can be achieved via the WordPress UI, we will use it as a simple use case to demonstrate propogating code changes to the WordPress application. Running a GUI application in a Docker container. This guide will show you how to run a GUI application headless in a Docker container and even more specific scenarios involving running Firefox and Chrome. 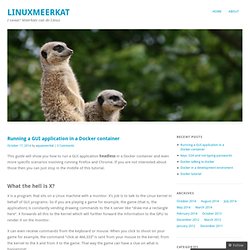 If you are not interested about those then you can just stop in the middle of this tutorial. X is a program that sits on a Linux machine with a monitor. X’s job is to talk to the Linux kernel in behalf of GUI programs. So if you are playing a game for example, the game (that is, the application) is constantly sending drawing commands to the X server like “draw me a rectangle here”. X forwards all this to the Kernel which will further forward the information to the GPU to render it on the monitor. X can even receive commands from the keyboard or mouse.

Bedrock Linux: Introduction. Introduction Linux distributions take software available and, in some sense or another, prepare it for end-users. 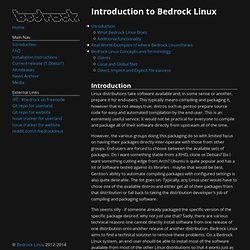 This typically means compiling and packaging it, however that is not always true; distros such as gentoo prepare source code for easy and automated compilation by the end user. This is an extremely useful service; it would not be practical for everyone to compile and package all of their software directly from upstream all of the time. However, the various groups doing this packaging do so with limited focus on having their packages directly inter-operate with those from other groups. End-users are forced to choose between the available sets of packages. This seems silly - if someone already packaged the specific version of the specific package desired, why not just use that? Introducing Consul Template - HashiCorp. Today we are releasing Consul Template, a standalone application that is packed full of amazing new features. 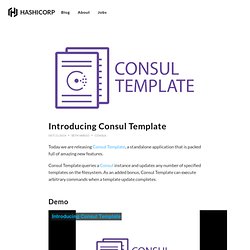 So it’s almost the end of the year, I’ve got about 10 days of vacation for the holidays and a bit of time on my hands. 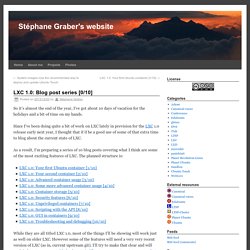