Untitled. The latest Ubuntu release, 20.04, marks an opportunity for both LTS users and people on the previous 19.10 release to update Ubuntu and take advantage of the latest features. 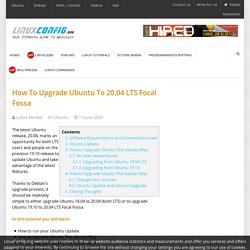 Thanks to Debian's upgrade process, it should be relatively simple to either upgrade Ubuntu 18.04 to 20.04 (both LTS) or to upgrade Ubuntu 19.10 to 20.04 LTS Focal Fossa. Untitled. This page provides a few suggestions on how to test that a properly installed DVB device1 is functioning correctly. 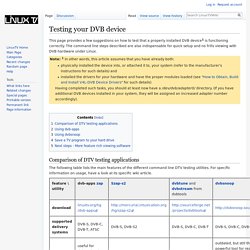 The command line steps described are also indispensable for quick setup and no frills viewing with DVB hardware under Linux. Note:1 In other words, this article assumes that you have already both: Untitled. Update (March 2020): I’ve heard from 10+ people who say these instructions work for them, I think it’s reliable. 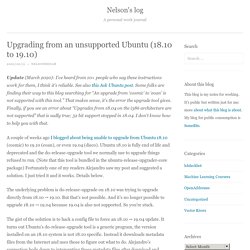 See also this Ask Ubuntu post. Some folks are finding their way to this blog searching for “An upgrade from ‘cosmic’ to ‘eoan’ is not supported with this tool.” That makes sense, it’s the error the upgrade tool gives. Finally, if you see an error about “Upgrades from 18.04 on the i386 architecture are not supported” that is sadly true; 32 bit support stopped in 18.04. 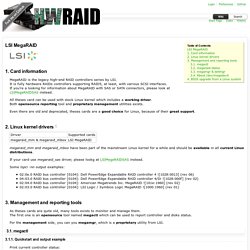 It is fully hardware RAIDs controllers supporting RAID5, at least, with various SCSI interfaces. If you're a looking for information about MegaRAID with SAS or SATA connectors, please look at LSIMegaRAIDSAS instead. All theses card can be used with stock Linux kernel which includes a working driver. Both opensource reporting tool and proprietary management utilities exists. DebianPackages – HWraid. We provide a Debian repository containing all packages to install proprietary and opensource tools for you RAID card. 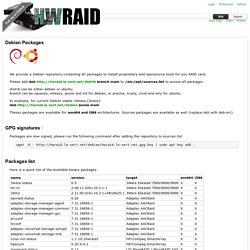 Please add deb branch main to /etc/apt/sources.list to access all packages. distrib can be either debian or ubuntu. branch can be squeeze, wheezy, jessie and sid for debian, or precise, trusty, vivid and wily for ubuntu. In example, for current Debian stable release (Jessie): deb jessie main Theses packages are available for amd64 and i386 architectures. Sources packages are available as well (replace deb with deb-src). Packages are now signed, please run the following command after adding the repository to sources.list: wget -O - | sudo apt-key add -

How To Use Systemctl to Manage Systemd Services and Units. Introduction Systemd is an init system and system manager that is widely becoming the new standard for Linux machines. 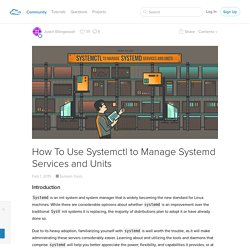 While there are considerable opinions about whether systemd is an improvement over the traditional SysV init systems it is replacing, the majority of distributions plan to adopt it or have already done so. Systemd. From the project web page: systemd is a suite of basic building blocks for a Linux system. 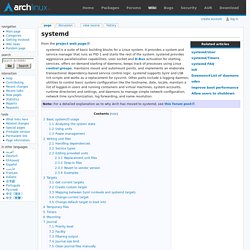 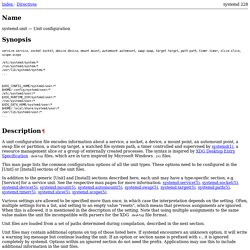 This is intended for use in UIs to show descriptive information along with the unit name. The description should contain a name that means something to the end user. Systemd. Systemd is an init system used in Linux distributions to bootstrap the user space and manage all processes subsequently, instead of the UNIX System V or Berkeley Software Distribution (BSD) init systems. 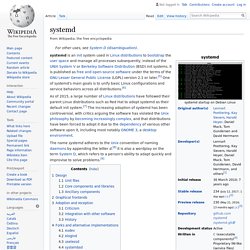 It is published as free and open-source software under the terms of the GNU Lesser General Public License (LGPL) version 2.1 or later.[5] One of systemd's main goals is to unify basic Linux configurations and service behaviors across all distributions.[6] Design[edit] The architecture of systemd as it is used by Tizen. Several components, including telephony, bootmode, dlog, and tizen service are from Tizen and are not components of systemd.[10] Can I send some text to the STDIN of an active process running in a screen session? Console - Construct a command by putting a string into a tty. Command line tricks for smart geeks. Everyone knows the answer to the question of life, the universe and everything is "42", but for the first time we can reveal the question. 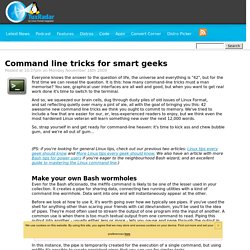 It is this: how many command-line tricks must a man memorise? You see, graphical user interfaces are all well and good, but when you want to get real work done it's time to switch to the terminal. And so, we squeezed our brain cells, dug through dusty piles of old issues of Linux Format, and sat reflecting quietly over many a pint of ale, all with the goal of bringing you this: 42 awesome new command line tricks we think you ought to commit to memory. We've tried to include a few that are easier for our, er, less-experienced readers to enjoy, but we think even the most hardened Linux veteran will learn something new over the next 12,000 words. Phrack Magazine. Display Linux boot messages on tty1 instead of ttyS1. Bug #535316 “random garbage on TTY1” : Bugs : gdm package. Linux keyboard event capturing /dev/inputX. Linux System IO monitoring. "Every thing is a file", is a very famous Linux philosophy.

20 Command Line Tools to Monitor Linux Performance. It’s really very tough job for every System or Network administrator to monitor and debug Linux System Performance problems every day. After being a Linux Administrator for 5 years in IT industry, I came to know that how hard is to monitor and keep systems up and running. For this reason, we’ve compiled the list of Top 20 frequently used command line monitoring tools that might be useful for every Linux/Unix System Administrator. These commands are available under all flavors of Linux and can be useful to monitor and find the actual causes of performance problem. From Power Up To Bash Prompt. Next Previous Contents From Power Up To Bash Prompt Greg O'Keefe, gcokeefe@postoffice.utas.edu.au v0.9a, November 2000 This is a brief description of what happens in a Linux system, from the time that you turn on the power, to the time that you log in and get a bash prompt.

Advanced Bash-Scripting Guide. An in-depth exploration of the art of shell scripting Mendel Cooper 10 Mar 2014 This tutorial assumes no previous knowledge of scripting or programming, yet progresses rapidly toward an intermediate/advanced level of instruction . . . all the while sneaking in little nuggets of UNIX® wisdom and lore. The TTY demystified.

Real teletypes in the 1940s. The TTY subsystem is central to the design of Linux, and UNIX in general. Unfortunately, its importance is often overlooked, and it is difficult to find good introductory articles about it. I believe that a basic understanding of TTYs in Linux is essential for the developer and the advanced user. Beware, though: What you are about to see is not particularly elegant. In fact, the TTY subsystem — while quite functional from a user's point of view — is a twisty little mess of special cases. History In 1869, the stock ticker was invented. HowTo: Setup SSH Keys on a Linux / Unix System. I recently read that SSH keys provide a secure way of logging into a Linux and Unix-based server. How do I set up SSH keys on a Linux or Unix based systems?

In SSH for Linux/Unix, how do I set up public key authentication? Techniques - Simple Linux networking - Rudolf Cardinal. Based on Ubuntu 10.04 (a variety of Debian Linux). Get a basic firewall up. Using SSH ProxyCommand to Tunnel Connections › Backdrift Backdrift. Tags: linux, ssh, unix. How To View and Configure Linux Logs on Ubuntu and Centos. Introduction Linux system administrators often need to look at log files for troubleshooting purposes. In fact, this is the first thing any sysadmin would do. Linux and the applications that run on it can generate all different types of messages, which are recorded in various log files. How do I run specific sudo commands without a password?