SysPlay eLearning Academy for You. Device Drivers, Part 1: Linux Device Drivers for Your Girl Friend - Open Source For You. This series on Linux device drivers aims to present the usually technical topic in a way that is more interesting to a wider cross-section of readers. 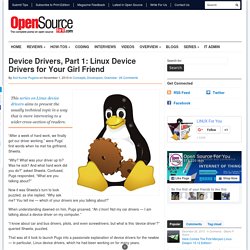 “After a week of hard work, we finally got our driver working,” were Pugs’ first words when he met his girlfriend, Shweta. “Why? What was your driver up to? Was he sick? And what hard work did you do?” Now it was Shweta’s turn to look puzzled, as she replied, “Why ask me? When understanding dawned on him, Pugs groaned, “Ah c’mon! “I know about car and bus drivers, pilots, and even screwdrivers; but what is this ‘device driver’?” That was all it took to launch Pugs into a passionate explanation of device drivers for the newbie — in particular, Linux device drivers, which he had been working on for many years.

Of drivers and buses A driver drives, manages, controls, directs and monitors the entity under its command. Introduction to Linux Kernel. What is Kernel? 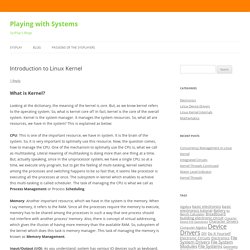 Looking at the dictionary, the meaning of the kernel is core. But, as we know kernel refers to the operating system. So, what is kernel core of? In fact, kernel is the core of the overall system. Kernel is the system manager. CPU: This is one of the important resource, we have in system. Memory: Another important resource, which we have in the system is the memory. Input/Output (I/O): As you understand, system has various IO devices such as keyboard, mice, and speakers and so on. Storage: This resource is used for storing the data in the non-volatile memory such as hard-disk. Network: In order to communication across the systems, we require the network. 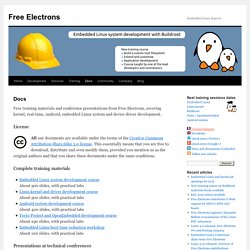 License All our documents are available under the terms of the Creative Commons Attribution-ShareAlike 3.0 license. This essentially means that you are free to download, distribute and even modify them, provided you mention us as the original authors and that you share these documents under the same conditions. Complete training materials Presentations at technical conferences Here are the most recent versions of presentations we made at technical conferences. 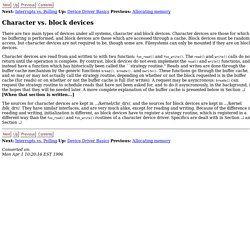 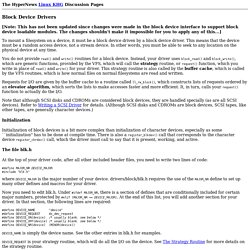 The changes shouldn't make it impossible for you to apply any of this...] To mount a filesystem on a device, it must be a block device driven by a block device driver. This means that the device must be a random access device, not a stream device. You do not provide read() and write() routines for a block device. Requests for I/O are given by the buffer cache to a routine called ll_rw_block(), which constructs lists of requests ordered by an elevator algorithm, which sorts the lists to make accesses faster and more efficient.