10 Tools To Add Some Spice To Your UNIX Shell Scripts. There are some misconceptions that shell scripts are only for a CLI environment. 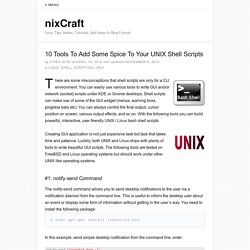 You can easily use various tools to write GUI and/or network (socket) scripts under KDE or Gnome desktops. Shell scripts can make use of some of the GUI widget (menus, warning boxs, progress bars etc). You can always control the final output, cursor position on screen, various output effects, and so on. With the following tools you can build powerful, interactive, user friendly UNIX / Linux bash shell scripts. Creating GUI application is not just expensive task but task that takes time and patience. . #1: notify-send Command The notify-send command allows you to send desktop notifications to the user via a notification daemon from the command line. Sample outputs: Fig:01: notify-send in action Here is another code with additional options: 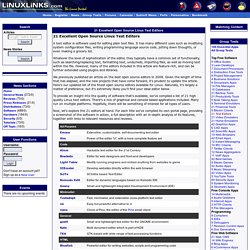 It has many different uses such as modifying system configuration files, writing programming language source code, jotting down thoughts, or even making a grocery list. Whatever the level of sophistication of the editor, they typically have a common set of functionality, such as searching/replacing text, formatting text, undo/redo, importing files, as well as moving text within the file. However, many of the editors included in this article are feature-rich, and can be further extended using plugins and libraries. We previously published an article on the best open source editors in 2008. Given the length of time that has elapsed, and the new projects that have come forward, it's prudent to update the article. To provide an insight into the quality of software that's available, we've compiled a list of 21 high quality Linux text editors.

100 Vim commands every programmer should know. Graphisme. Audio. Administration. How To Read CPUID Instruction For Each CPU on Linux With x86info and cpuid Commands. Datavu: Useful Unix commands for exploring data. While dealing with big genetic data sets I often got stuck with limitation of programming languages in terms of reading big files. 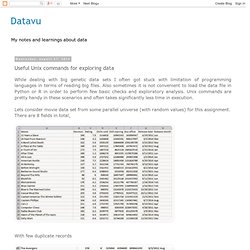 Also sometimes it is not convenient to load the data file in Python or R in order to perform few basic checks and exploratory analysis. Unix commands are pretty handy in these scenarios and often takes significantly less time in execution. Lets consider movie data set from some parallel universe (with random values) for this assignment. There are 8 fields in total, With few duplicate records Lets start with few basic examples, Check column names of file head -1 movies.csv We can use cat to display the file but we are interested in column names which is only first row of the file. Check number of records in the file wc -l movies.csv The command wc gives us number of characters, number of words and number of lines in a file. Check 50th record head -50 movies.csv | tail -1. The Best Linux Applications of 2013. 2013 – What A Year, Right? 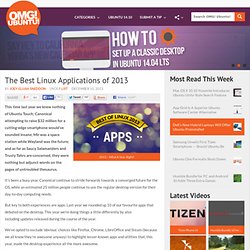 This time last year we knew nothing of Ubuntu Touch; Canonical attempting to raise $32 million for a cutting-edge smartphone would’ve sounded insane; Mir was a space station while Wayland was the future; and as far as Saucy Salamanders and Trusty Tahrs are concerned, they were nothing but adjunct words on the pages of untroubled thesaurus. It’s been a busy year. Canonical continue to stride forwards towards a converged future for the OS, while an estimated 25 million people continue to use the regular desktop version for their day-to-day computing needs. But key to both experiences are apps. Last year we rounded up 10 of our favourite apps that debuted on the desktop. We’ve opted to exclude ‘obvious’ choices like Firefox, Chrome, LibreOffice and Steam (because we all know they’re awesome anyway) to highlight lesser-known apps and utilities that, this year, made the desktop experience all the more awesome.

What did we pick? Geary Birdie Twitter App Springseed. How to do line-by-line comparison of files in Linux using diff command. If you are a Linux user, and your job involves working on various Linux distributions, there may be times when you'll find yourself typing commands on a Linux system with no GUI. 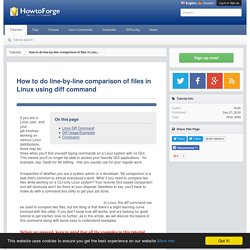 This means you'll no longer be able to access your favorite GUI applications - for example, say, Gedit for file editing - that you usually use for your regular work. Irrespective of whether you are a system admin or a developer, file comparison is a task that's common to almost everybody's work. What if you need to compare two files while working on a CLI-only Linux system? Your favorite GUI-based comparison tool will obviously won't be there at your disposal. Needless to say, you'll have to make do with a command line utility to get your job done. In Linux, the diff command can be used to compare two files, but the thing is that there's a slight learning curve involved with this utility.