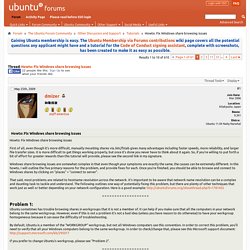 It is more difficult to get things working properly, but once it’s done you never have to think about it again. So, if you’re willing to put forth a bit of effort for greater rewards than this tutorial will provide, please see the second link in my signature.Windows share browsing issues are somewhat complex in that even though your symptoms are exactly the same, the causes can be extremely different. In this howto, I will outline the five primary reasons for the problem, and provide fixes for each. 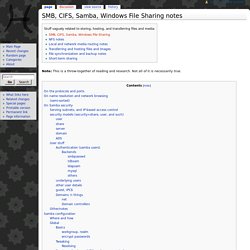 Not all of it is necessarily true. The original protocol is SMB, Server Message Block. CIFS (Computer Internet FileSystem, see also e.g. [1]) is a more recent extension of the SMB protocol developed at IBM, and later by Microsoft. SMB originally worked on top of a NetBIOS layer, which meant you could run it over IPX, as well as TCP/IP (via NBT, NetBIOS over TCP/IP). CIFS can additionally work on TCP/IP without using NetBIOS.

Related ports: 445/TCP indicates the NetBIOS-less TCP/IP service. A CIFS-capable clients will typically try to connect to 445 and fall back to 139, or possibly try both connections simultaneously. 139/TCP is NetBIOS session: connection handshake, authentication, and main data transfer 137/UDP is the NetBIOS nameservice (NBNS), which usually broadcasts on the local subnet 137/TCP - reserved (convention of marking udp+tcp variant of a port as the same thing), or actually used by NBNS/WINS? Network shares "device is busy" Cannot Share External Hard Drive on Windows Network. If I try to circumvent the whole problem by connecting a network attached storage device, will I have the same problem? 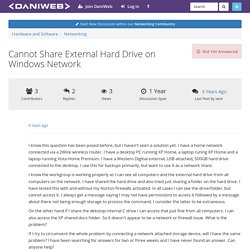 I have been searching for answers for two or three weeks and I have never found an answer. Can anyone help? No you will not have the same problem with a NAS because it is a stand alone unit with its own network parameters. Therefore, the problems that you are having are probably having to do with USB 2.0 and the ability to see that device correctly, will not likely be the case with a NAS.

I had a similar issue on several of my workstations where they could not write to the USB drive on another computer, etc. and it was because of buffering issues and the speed of the USB 2.0 cable. the NAS unit fixed the problem. Furthermore, have you tried using Windows Explorer and typing in the IP address of the computer that the drive is connected to? Abstract. MountWindowsSharesPermanently.

Please see about one reason for the update need. 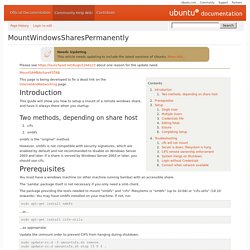 MountSAMBAshareFSTAB This page is being developed to fix a dead link on the InternetAndNetworking page. This guide will show you how to setup a mount of a remote windows share, and have it always there when you startup. Two methods, depending on share host cifs smbfs smbfs is the "original" method. How to join Ubuntu to a Windows Workgroup. Although many Windows networks take advantage of Active Directory and Domains, I see plenty of smaller networks out there that only use the workgroup solution to enable machines to see one another (and share folders/printers). 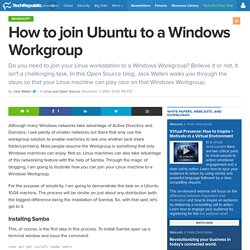 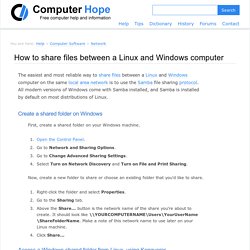 All modern versions of Windows come with Samba installed, and Samba is installed by default on most distributions of Linux. Create a shared folder on Windows First, create a shared folder on your Windows machine. Open the Control Panel. How to: Join a Windows work group from Ubuntu and set-up file sharing « Pete's Tech Blog. If you want to share files between a Windows PC and a Linux PC running Ubuntu follow these few steps to add the Ubuntu machine to a windows work-group and start sharing files and folders. 1. 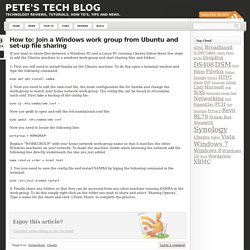 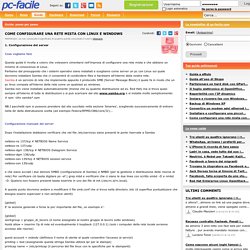