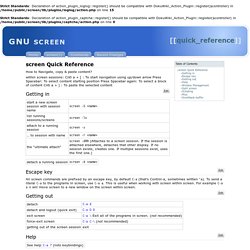 Save pixels in your Gnome Shell. I love Gnome Shell, but was bothered by the amount of pixel wasted in its interface. 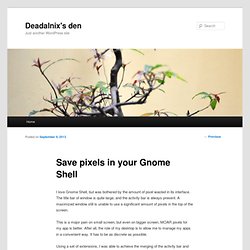 The title bar of window is quite large, and the activity bar is always present. A maximized window still is unable to use a significant amount of pixels in the top of the screen. This is a major pain on small screen, but even on bigger screen, MOAR pixels for my app is better. After all, the role of my desktop is to allow me to manage my apps in a convenient way. It has to be as discrete as possible. Using a set of extensions, I was able to achieve the merging of the activity bar and the title bar for maximized window, but recently one of these extensions stopped working and the configuration of the whole stuff was quite complex and unappealing. Pixel Saver The goal is simple : merge the title bar and the activity bar when a window is maximized, in the most natural possible way. That is Awesome ! Follow the guide : Easy ! GnomeLove/CoreApps. Talk:NetworkManager. GNOME 3 and nm-applet Looks like GNOME 3 doesn't need nm-applet any more. 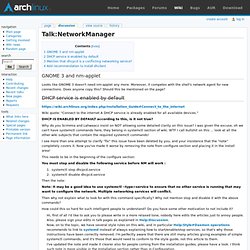 Moreover, it competes with the shell's network agent for new connections. Does anyone copy this? Should this be mentioned on the page? DHCP service is enabled by default. UnRTF - GNU Project - Free Software Foundation (FSF) [ English ] Table of Contents Introduction to UnRTF UnRTF is a command-line program written in C which converts documents in Rich Text Format (.rtf) to HTML, LaTeX, troff macros, and RTF itself. 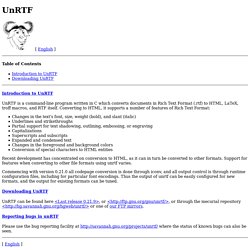 Converting to HTML, it supports a number of features of Rich Text Format: Changes in the text's font, size, weight (bold), and slant (italic) Underlines and strikethroughs Partial support for text shadowing, outlining, embossing, or engraving Capitalizations Superscripts and subscripts Expanded and condensed text Changes in the foreground and background colors Conversion of special characters to HTML entities. Linux Archives - Andrew Kirkpatrick. Yaourt. Warning: Yaourt is an unofficial, third-party script that is not supported by the Arch Linux developers. 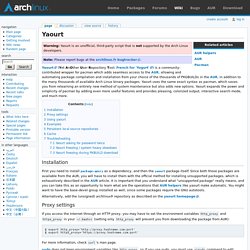 Yaourt (Yet AnOther User Repository Tool; French for 'Yogurt') is a community-contributed wrapper for pacman which adds seamless access to the AUR, allowing and automating package compilation and installation from your choice of the thousands of PKGBUILDs in the AUR, in addition to the many thousands of available Arch Linux binary packages. Yaourt uses the same exact syntax as pacman, which saves you from relearning an entirely new method of system maintenance but also adds new options. Yaourt expands the power and simplicity of pacman by adding even more useful features and provides pleasing, colorized output, interactive search mode, and much more. Installation First you need to install package-query as a dependency, and then the yaourt package itself. #15486 (pidgin/purple fails with "The certificate chain presented is invalid.") Unable to install 32bit libs on 64bit Arch. Budget Fair Queueing (BFQ) Storage-I/O Scheduler. In this page we report a selection of our last test results, with BFQ-v7r4, CFQ, DEADLINE and NOOP, under 3.14.0, and on the following three devices; plus our results with BFQ-v7 and CFQ under 3.13.0 on the remaining three devices (the latter results are a courtesy of Virtual Open Systems): A (high-speed) Seagate ST1000DM003 HDD A pair of the above HDDs in a software RAID1 configuration A PLEXTOR PX-256M5S SSD A (low-speed) 1.8-inch Toshiba MK6006GAH HDD A Transcend microSDHC Class 6 Card A SanDisk SEM16G eMMC Results with previous versions of BFQ and/or Linux can be found here. 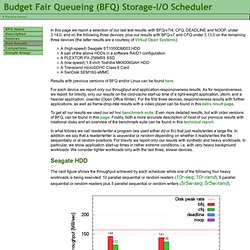 For each device we report only our throughput and application-responsiveness results. GNU screen [quick_reference] Dynamic DNS. Dynamic DNS or DDNS is a method of updating, in real time, a DNS to point to a changing IP address on the Internet. 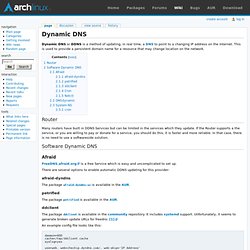 This is used to provide a persistent domain name for a resource that may change location on the network. Router Many routers have built in DDNS Services but can be limited in the services which they update. If the Router supports a the service, or you are willing to pay or donate for a service, you should do this, it is faster and more reliable. The right way to uninstall a software in Arch Linux. In Arch Linux softwares can be installed easily from the terminal by using pacman and you also use pacman to uninstall them( if you want to install softwares from the AUR, you can use packer). 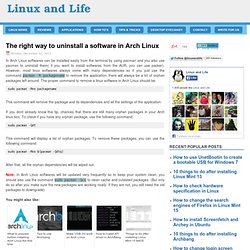 However, most linux softwares always come with many dependencies so if you just use the command pacman -R packagename to remove the application, there will always be a lot of orphan packages left around. Because It Works!! Installing Packages Before installing and upgrading packages, it is a good idea to synchronize the local package database with the remote repositories. pacman -Sy …or, equivalently: pacman –sync –refresh To install or upgrade a single package or list of packages (including dependencies), issue the following command: 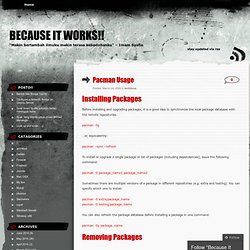