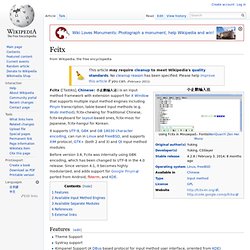 Wubi method), fcitx-chewing for Traditional Chinese, fcitx-keyboard for layout-based ones, fcitx-mozc for Japanese, fcitx-hangul for Korean. Before version 3.6, Fcitx was internally using GBK encoding, which has been changed to UTF-8 in the 4.0 release. Since version 4.1, it becomes highly modularized, and adds support for Google Pinyin ported from Android, fbterm, and KDE. Uim. Uim (short for "universal input method") is a multilingual input method framework. 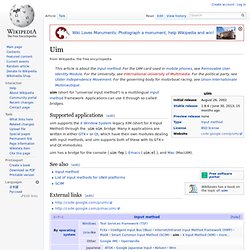 Applications can use it through so-called bridges. Intelligent Input Bus. Goals[edit] The main goals of the IBus project include: providing full-featured and user-friendly input-method user-interfacesemploying authentication measures to improve securityproviding a universal interface and library for input-method developersfitting the need of users from different regions and customs Motivation[edit] The draft Specification of IM engine Service Provider Interface[1] document from the Northeast Asia OSS Forum[2] Work Group 3 recommends bus-centric IM framework architectures with a bus implementation (similar to dbus). 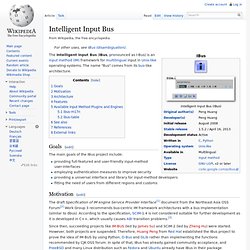 According to the specification, SCIM-1.4 is not considered suitable for further development as it is developed in C++, which usually causes ABI transition problems.[3] Architecture[edit] IBus provides most of its functionality through services. Maliit. Maliit an input method framework for computers with particular focus on implementing virtual keyboards. 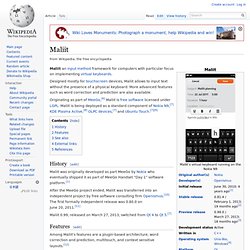 Designed mostly for touchscreen devices, Maliit allows to input text without the presence of a physical keyboard. More advanced features such as word correction and prediction are also available. Originating as part of MeeGo,[6] Maliit is free software licensed under LGPL. Smart Common Input Method. The Smart Common Input Method platform (SCIM) is an input method (IM) platform containing support for more than thirty languages (CJK and many European languages) for POSIX-style operating systems including Linux and BSD. 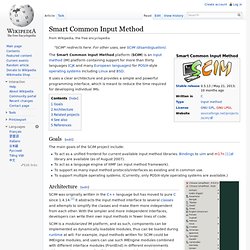 It uses a clear architecture and provides a simple and powerful programming interface, which is meant to reduce the time required for developing individual IMs. Goals[edit] The main goals of the SCIM project include: some of the input methods managed by SCIM. Mer (software distribution) Relations of Mer and the mobile operating systems incorporating it and also of the projects it was forked from. 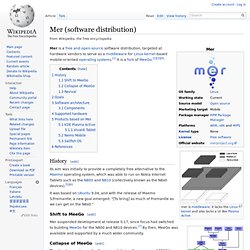 Its aim was initially to provide a completely free alternative to the Maemo operating system, which was able to run on Nokia Internet Tablets such as the N800 and N810 (collectively known as the N8x0 devices).[5][6] Mer suspended development at release 0.17, since focus had switched to building MeeGo for the N800 and N810 devices.[7] By then, MeeGo was available and supported by a much wider community.

The development was silently resumed during the summer of 2011 by a handful of MeeGo developers (some of them previously active in the Mer project), after Nokia changed their strategy in February 2011. After the Tizen project was announced, the revival of the Mer project was announced on the MeeGo mailing list,[2] with the promise that it will be developed and governed completely in the open as a meritocracy, unlike MeeGo and Tizen. Toybox.

Toybox is an implementation of some Linux command line utilities started in 2006.[1] Its major design goals are simplicity, smallness and speed.[2] It is an alternative to BusyBox.[3] Toybox was created in 2006[4] and is mainly developed by Robert Landley, a former BusyBox maintainer.[5] Differences between BusyBox and Toybox[edit] Compared to BusyBox: Toybox focuses on standards more than on compatibility with its GNU counterparts.Toybox is licensed using a BSD license rather than a GNU General Public License. 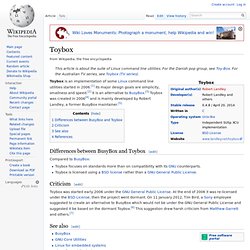 Criticism[edit] Toybox was started early 2006 under the GNU General Public License. BusyBox. History[edit] Origins[edit] BusyBox was maintained by Enrique Zanardi and focused on the needs of the Debian boot-floppies installer system until early 1998, when Dave Cinege took it over for the Linux Router Project (LRP). 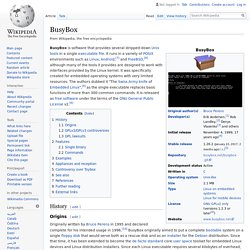 Cinege made several additions, created a modularized build environment, and shifted BusyBox's focus into general high-level embedded systems. As LRP development slowed down in 1999, Erik Andersen, then of Lineo, Inc., took over the project and became the official maintainer between December 1999 and March 2006. During this time the Linux embedded marketplace exploded in growth, and BusyBox matured greatly, expanding both its user base and functionality.

GPLv2/GPLv3 controversies[edit] As of October 2006[update] Denys Vlasenko took over maintainership of BusyBox from Rob Landley, who started Toybox, also as result of the license controversies.[12][15] Mer (software distribution)