Apple’s Persistent Device ID is a Threat to Privacy. Today, a group known as Antisec released a collection of one million UDIDs—serial numbers associated with Apple mobile devices, such as iPhones and iPads—which they claim came from a trove of 12 million UDIDs pilfered from an FBI agent’s laptop. 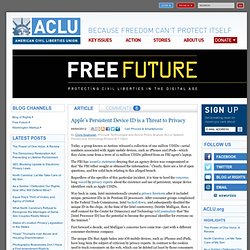 The FBI has issued a statement denying that an agency device was compromised or that “the FBI either sought or obtained the information.” Clearly, there are a lot of open questions, and few solid facts relating to this alleged breach. Regardless of the specifics of this particular incident, it is time to heed the concerns long voiced by privacy experts about the existence and use of persistent, unique device identifiers such as Apple UDIDs. Way back in 1999, Intel unintentionally created a privacy firestorm after it included unique, persistent IDs in its Pentium III processors. After consumer groups complained to the Federal Trade Commission, Intel backed down, and subsequently disabled the unique ID in the chips. AntiSec dérobe 12 millions d’identifiants de terminaux Apple au FBI. Chaque terminal iOS d’Apple dispose d’un identifiant unique, un UDID (Unique Device Identifiers). 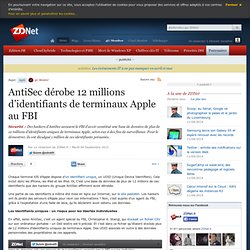 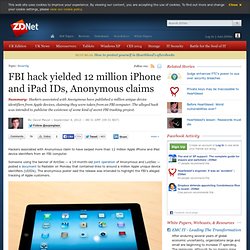 Someone using the banner of AntiSec — a 14-month-old joint operation of Anonymous and LulzSec — posted a document to Pastebin on Monday that contained links to around a million Apple unique device identifiers (UDIDs). The anonymous poster said the release was intended to highlight the FBI's alleged tracking of Apple customers. "We never liked the concept of UDIDs since the beginning indeed," the post read. "Really bad decision from Apple. Fishy thingie. " Every iOS device has a UDID. Hackers Allegedly Leak 1 Million Apple Device IDs. The AntiSec hacker group claims it has in its possession more than 12 million Apple iOS Unique Device IDs, as well as other personal info from device owners. 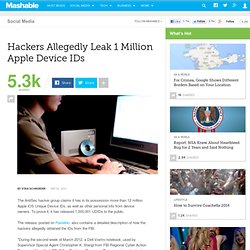 To prove it, it has released 1,000,001 UDIDs to the public. The release, posted on Pastebin, also contains a detailed description of how the hackers allegedly obtained the IDs from the FBI. "During the second week of March 2012, a Dell Vostro notebook, used by Supervisor Special Agent Christopher K. SPECIAL #FFF EDITION - ANONYMOUS. Anonymous Hackers Claim To Release One Million Apple Devices' Unique Identifiers Stolen From FBI. The FBI Was Tracking Over 1M+ Apple IDs, And AntiSec Just Leaked Them. Earlier in this year, Apple shut down the unique device identifier or UDID as a valid way for developers to try to track users of their apps. 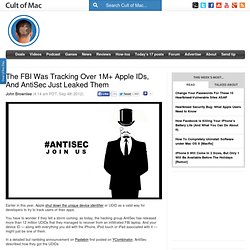 You have to wonder if they felt a storm coming, as today, the hacking group AntiSec has released more than 12 million UDIDs that they managed to recover from an infilitrated FBI laptop. And your device ID — along with everything you did with the iPhone, iPod touch or iPad associated with it — might just be one of them. In a detailed but rambling announcement on Pastebin first posted on YCombinator, AntiSec described how they got the UDIDs: Looks like they've got Obama's iPad:thea:Downloads admin$ cat ./iphonelist.txt. Hackers Leak One Million Apple Device IDs Stolen From... the FBI. Hacking group AntiSec claims to have stolen a massive collection of Apple hardware and user data from within the FBI, releasing 1,000,001 of the Unique Device Identifiers into the wild as proof of its breach. 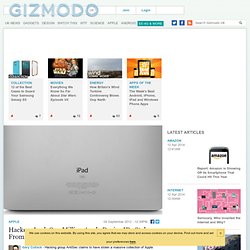 AntiSec says it secured details of over 12m Apple devices from files contained on an FBI agent's laptop that was cracked and entered using a Java vulnerability, which raises some rather big questions about exactly why the FBI has been logging and carrying about iOS user details. The file contained some user names, post codes, phone numbers and addresses as well as the device IDs, although the data was incomplete and has been deliberately edited by the leakers to stop users being fully identified. AntiSec also added a big speech to the top of the released files, rambling on about how no one would believe its tracking claims about the FBI if it didn't dump the data. So it dumped the data. So there.

Check If Your Apple Device Has Been Compromised by the AntiSec Leak. 4 September '12, 01:38pm Follow If you’re worried that you might own one of the 1 million Apple devices that have had their UDIDs leaked by AntiSec, reportedly from a breach of an FBI agent’s laptop, our rockstar tech team has put together a tool to help you check. 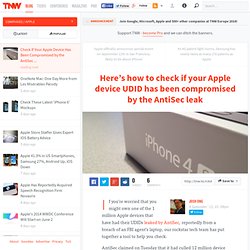 AntiSec claimed on Tuesday that it had culled 12 million device IDs, along with accompanying personal information, from the FBI in March of this year. The hacker group then leaked 1 million of them, saying it had removed some of the identifiable information from the list, while leaving enough for users to see if their device was leaked. To check your device, just input your UDID/UUID into the form and we’ll run it against the database. Hackers Allegedly Leak 1 Million Apple Device IDs.