LiveAquaria. Overview The Trumpet Coral is a large polyp stony (LPS) coral often referred to as the Trumpet, Torch, Candy, or Bullseye Coral. 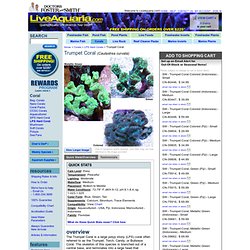 The skeleton of this species is branched out of a central base, and terminates into a large head that resembles a trumpet. A large fleshy polyp covers the each head of the colony, and the polyps are florescent green in this species. The Trumpet Coral is able to expand its fleshy polyps to many times its skeleton size giving the coral a similar appearance when compared to a closed brain coral. Zoanthids, Palys. Diver's Den® Aquatic Connection. Description: Fancy Doughnut Corals, are the top picks in the industry and are very difficult to get a hold of. 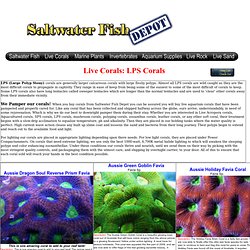 Scolymia corals can also be confused with relatives in the Cynarina genus, as well as juveniles in the Lobophyllia genus. Scolymia corals colors are generally green, red, cream, or blue. Where found: The Scolymia genus inhabit the Pacific as well as the Atlantic. Diet and location Requirements:It requires medium lighting combined with low water movement. 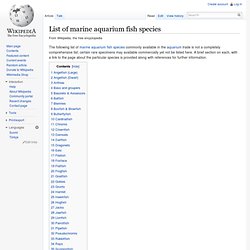 A brief section on each, with a link to the page about the particular species is provided along with references for further information. Angelfish (Large)[edit] Angelfish (Dwarf)[edit] Although Dwarf Angelfish are smaller and generally more manageable than their larger counterparts, they still have some specific care requirements. Saltwater Aquarium Fish. Saltwater fish care information and pictures ordered by saltwater aquarium fish species and type. 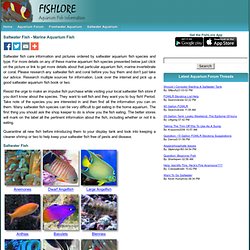 For more details on any of these marine aquarium fish species presented below just click on the picture or link to get more details about that particular aquarium fish, marine invertebrate or coral. Please research any saltwater fish and coral before you buy them and don't just take our advice. Research multiple sources for information. Look over the internet and pick up a good saltwater aquarium fish book or two. Resist the urge to make an impulse fish purchase while visiting your local saltwater fish store if you don't know about the species.

Quarantine all new fish before introducing them to your display tank and look into keeping a cleaner shrimp or two to help keep your saltwater fish free of pests and disease. Author : Mike FishLore Share This Page: © Fish Lore.com - providing tropical fish tank and aquarium information for freshwater fish and saltwater fish keepers. 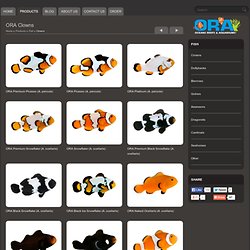 Aquarists and aquaculture biologists have bred them for over 40 years. Captive-bred clownfish are indistinguishable in behavior and morphology from clownfish found in nature. ORA has taken clownfish culture to the highest level, producing the largest, most colorful and healthiest fish ever grown. One popular misconception about cultured clownfish is that they will not symbiotically associate with anemones like their wild counterparts. This is not true, as demonstrated by the many professional and amateur aquarists who have observed cultured clownfish associate with host anemones in aquariums. ORA clownfish are raised on common aquarium foods, and therfore, they are well adapted to aquarium diets. By nature clownfish are territorial and mate for life. A nest of clownfish eggs in nature may have only a few survivors into adulthood, while farm-raised spawns generally have higher survival rates.