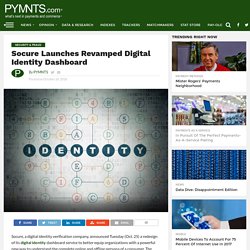 The news comes on the heels of a series of exciting developments at the company, including several industry partnerships and a marked increase in year-on-year growth. In a press release, Socure said the ID+ product suite enables manual review teams to automate the traditionally laborious process of quickly decisioning new consumers, better assess risks and prevent fraud and identity theft. The announcement brings a host of enhanced analytical capabilities to augment onboarding teams’ understanding of trends that indicate where fraud attacks are occurring, the identities that are being used and a host of powerful data points that can be interrogated and analyzed, the company said. Iris - Factom. Iris - Factom. Electronic identity and digital signing – Signicat. Nok Nok Labs, Inc. 56 Facial Recognition Research Groups to Watch. The research of facial recognition has been a fascinating journey. 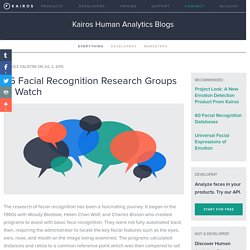 It began in the 1960s with Woody Bledsoe, Helen Chan Wolf, and Charles Bisson who created programs to assist with basic face recognition. They were not fully automated back then, requiring the administrator to locate the key facial features such as the eyes, ears, nose, and mouth on the image being examined. The programs calculated distances and ratios to a common reference point which was then compared to set reference data. Since those early days, many facial recognition research groups have examined various aspects of facial detections and recognition.

By the 1970s Goldstein, Harmon, and Lesk were able to automate the recognition process by using 21 specific subjective markers, such as hair color and lip thickness. I have found 56 locations where facial recognition research groups have been the vanguard of 21st-century research into facial analysis. 1. 2. 3. A.

Dr. B. 4. Mobile. Say goodbye to the hassle of passwords. Proof of Identity on Ethereum (or the “KYC problem”) It doesn’t come as a surprise that the “KYC problem” is such a hot topic today when talking about interesting blockchain apps. 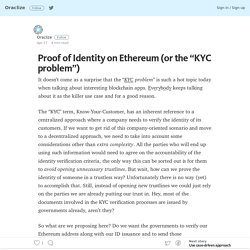 Everybody keeps talking about it as the killer use case and for a good reason. The “KYC” term, Know-Your-Customer, has an inherent reference to a centralized approach where a company needs to verify the identity of its customers. If we want to get rid of this company-oriented scenario and move to a decentralized approach, we need to take into account some considerations other than extra complexity. All the parties who will end up using such information would need to agree on the accountability of the identity verification criteria, the only way this can be sorted out is for them to avoid opening unnecessary trustlines. 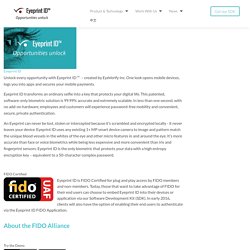 One look opens mobile devices, logs you into apps and secures your mobile payments. Eyeprint ID transforms an ordinary selfie into a key that protects your digital life. This patented, software-only biometric solution is 99.99% accurate and extremely scalable. Say goodbye to the hassle of passwords. Safran Identity & Security. Combining biometrics and digital solutions to make life safer and easier New digital technologies are transforming our world at a rapid pace, creating new challenges as well as new opportunities. 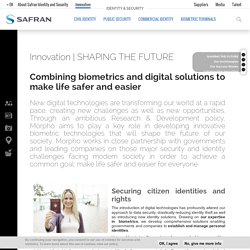 Through an ambitious Research & Development policy, Morpho aims to play a key role in developing innovative biometric technologies that will shape the future of our society. Morpho works in close partnership with governments and leading companies on those major security and identity challenges facing modern society in order to achieve a common goal: make life safer and easier for everyone. Securing citizen identities and rights The introduction of digital technologies has profoundly altered our approach to data security, drastically reducing identity theft as well as introducing new identity solutions. OIXnet. 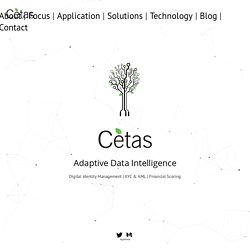 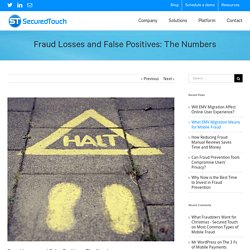 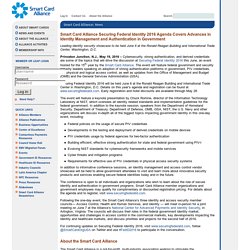 Princeton Junction, N.J., May 19, 2016 – Cybersecurity, strong authentication, and derived credentials are some of the topics that will drive the discussion at Securing Federal Identity 2016 this June, an event hosted for the 15th year by the Smart Card Alliance. The event will feature federal government and security industry leaders speaking on adoption of strong authentication platforms in government, PIV credentials, and physical and logical access control, as well as updates from the Office of Management and Budget (OMB) and the General Services Administration (GSA).

Securing Federal Identity 2016 will be held June 6 at the Ronald Reagan Building and International Trade Center in Washington, D.C. How we record your fraud reports. Action Fraud takes crime and information reports on a number of fraud and internet crimes as set out in the Home Office Counting Rules for Fraud and Forgery. 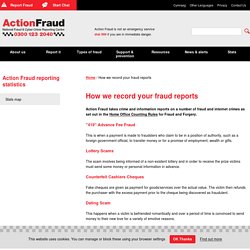 "419" Advance Fee Fraud This is when a payment is made to fraudsters who claim to be in a position of authority, such as a foreign government official, to transfer money or for a promise of employment, wealth or gifts. Lottery Scams. Financial Institutions' Digital Identity Trust. 1 Share Share Tweet Email With more banking consumers wanting an omnichannel experience, the challenge facing financial institutions is how to provide it to them securely. 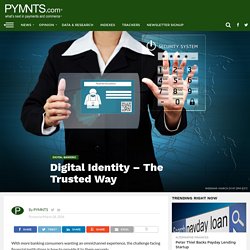 Security snapshot reveals massive personal data loss. Image copyright Reuters More than 500 million digital identities were stolen or exposed in 2015, suggests a report from security firm Symantec. In addition, it said, fake technical support scams rose by 200% and crypto-based ransomware attacks grew by 35%. Hackers also made more use of unknown software bugs to make sure attacks work, said the annual threat report. Mobile Payments Fraud: 10 Tips For Merchants. 3 Shares Share Tweet Email By the year 2017, mobile transactions worldwide are projected to be nearly three quarters of a trillion dollars. Yes, trillion with a T. 721.4 trillion, to be exact — according to Kount’s count. That’s a far cry above what 2010’s figures registered, which was at $52.9 billion, which subsequently doubled the next year.