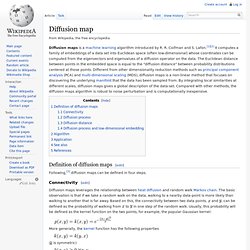 R. Coifman and S. Lafon.[1][2] It computes a family of embeddings of a data set into Euclidean space (often low-dimensional) whose coordinates can be computed from the eigenvectors and eigenvalues of a diffusion operator on the data. The Euclidean distance between points in the embedded space is equal to the "diffusion distance" between probability distributions centered at those points. Different from other dimensionality reduction methods such as principal component analysis (PCA) and multi-dimensional scaling (MDS), diffusion maps is a non-linear method that focuses on discovering the underlying manifold that the data has been sampled from. Definition of diffusion maps[edit] Following,[3] diffusion maps can be defined in four steps.

Connectivity[edit] Diffusion maps leverages the relationship between heat diffusion and random walk Markov chain. And , can be defined as the probability of walking from to is symmetric) step yields. Distance Functions and Metric Learning - ECCV2010 Tutorial. Distance functions are at the core of numerous computer vision tasks. 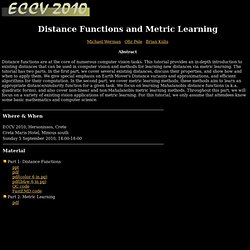 This tutorial provides an in-depth introduction to existing distances that can be used in computer vision and methods for learning new distances via metric learning. The tutorial has two parts. In the first part, we cover several existing distances, discuss their properties, and show how and when to apply them. We give special emphasis on Earth Mover's Distance variants and approximations, and efficient algorithms for their computation. 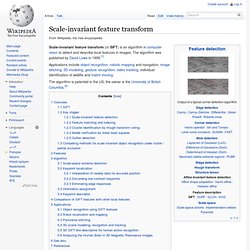 The algorithm is patented in the US; the owner is the University of British Columbia.[2] Overview[edit] For any object in an image, interesting points on the object can be extracted to provide a "feature description" of the object. This description, extracted from a training image, can then be used to identify the object when attempting to locate the object in a test image containing many other objects. To perform reliable recognition, it is important that the features extracted from the training image be detectable even under changes in image scale, noise and illumination.

Another important characteristic of these features is that the relative positions between them in the original scene shouldn't change from one image to another. SIFT[edit] Key stages[edit] Scale-invariant feature detection[edit] List of probability metrics. Code. Image - Python code for Earth mover's Distance. Pdinges/python-emd. Fast Earth Mover's Distance (EMD) Code (C++ and Matlab and Java wrappers) The code efficiently computes the Earth Mover's Distance (EMD) between two histograms or sparse histograms (signatures). 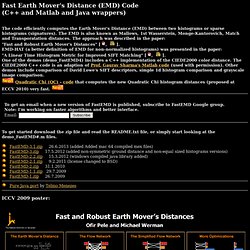