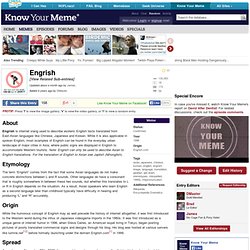 While it is also applicable in spoken English, most examples of Engrish can be found in the everyday urban landscape of major cities in Asia, where public signs are displayed in English to accommodate Western tourists. Note: Engrish can only be used to describe Asian to English translations. For the translation of English to Asian see Japlish (Nihonglish). Etymology The term “Engrish” comes from the fact that some Asian languages do not make concrete distinctions between L and R sounds.

Origin While the humorous concept of Engrish may as well precede the history of Internet altogether, it was first introduced to the Western world during the influx of Japanese videogame imports in the 1980s. Spread The first Urban Dictionary entry for “Engrish” was submitted on August 13th, 2003. N. Notable Examples Search Interest External References. Engrish. FAIL. About FAIL is turn-of-the-century internet slang that came to popularity through image macros and short videos depicting situations with unfortunate outcomes.

Traditionally, the verb “fail” has been a used to signify the opposite of “succeed,” to fall short of achieving a goal. Today, the word is also commonly used as an interjection to point out a person’s mistake or shortcoming, often regardless of its magnitude. Origin The earliest documented usage of the term “FAIL” can be traced to a Japanese 16-bit scrolling shooter game, Blazing Star (1998), often mocked for its grammatically incorrect “game over” message that reads: As seen with the All Your Base are Belong to Us meme, the combination of a retro video game narrative and Engrish translation proves itself to be a powerful source of lulz. Spread While the exact origin of “FAIL,” as an interjection, remains unknown, the earliest appearance of “FAIL” on slang repository Urban Dictionary dates back to July 22nd, 2003. 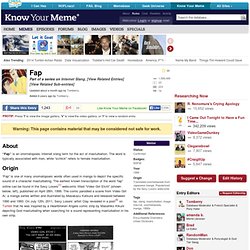 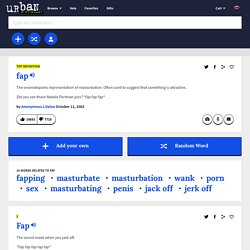 Often used to suggest that something is attractive. Did you see those Natalie Portman pics? *fap fap fap* The sound made when you jack off. *Fap fap fap fap fap* Fred: Hey, whats going on in there. A noise Justin Bieber can't make. *justin bieber trying to fap* Justin Bieber: Why isn't it working?!?!? The sound made during masturbation. faps the way uuhhuh uuhuh i like it. FHRITP. About “Fuck Her Right in the Pussy” is an obscene quote that gained much notoriety online after it was widely thought to have been said by a videobombing prankster during the live broadcast of a local news report in Cincinnati, Ohio. 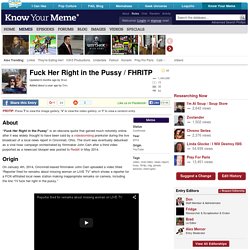 The stunt was eventually debunked as a viral hoax campaign orchestrated by filmmaker John Cain after a third video purported as a newscast blooper was posted to Reddit in May 2014. Origin On January 4th, 2014, Cincinnati-based filmmaker John Cain uploaded a video titled “Reporter fired for remarks about missing woman on LIVE TV” which shows a reporter for a FOX-affiliated local news station making inappropriate remarks on camera, including the line “I’ll fuck her right in the pussy.” On January 7th, Cain’s video was highlighted by Ray William Johnson in an episode titled “Things That Kill,” giving further boost to its virality on YouTube. Spread Controversies Jameis Winston’s Florida State University Outburst Toronto FC Heckling Incident Search Interest. 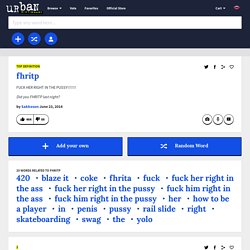 FHRITP. FUCK HER RIGHT IN THE PUSSY. possibly the most revolutionary and iconic phrase of the twenty first century. Triumphs far above derogatory and degenerative terms such as "yolo"， “swag" E t ceterfuckingra. This phrase has been brought to this sad world by the american savior, Fred, in hopes of bringing about world peace, curing all minor and major diseases, and fucking her right in the pussy. Who is he trying to fuck right in the pussy you say? This elegant phrase can literally be used in any conversation, no matter how nonsensical it may seem. Fuck Logic. About “Fuck Logic” is an image macro series based on various photographs depicting impossible feats or scenarios along with a brief description that points out the logical unsoundness depicted in the said images. 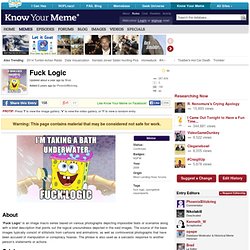 The source of the base images typically consist of stillshots from cartoons and animations, as well as controversial photographs that have been accused of manipulation or conspiracy hoaxes. The phrase is also used as a sarcastic response to another person’s statements or actions. Origin Although the captioned image series gained momentum through Spongebob Squarepants-related posts in the second half of 2011, the earliest mention of the phrase “Fuck Logic” can be found in Björk’s 1995 song “Sweet Intuition”: “Fuck logic, fuck logic / bravo to instinct / and sweet intuition.” Another anecdotal account suggests the phrase became associated with scientific impossibility after a forum discussion over the health effects of unshielded exposure to solar radiation in outer space.