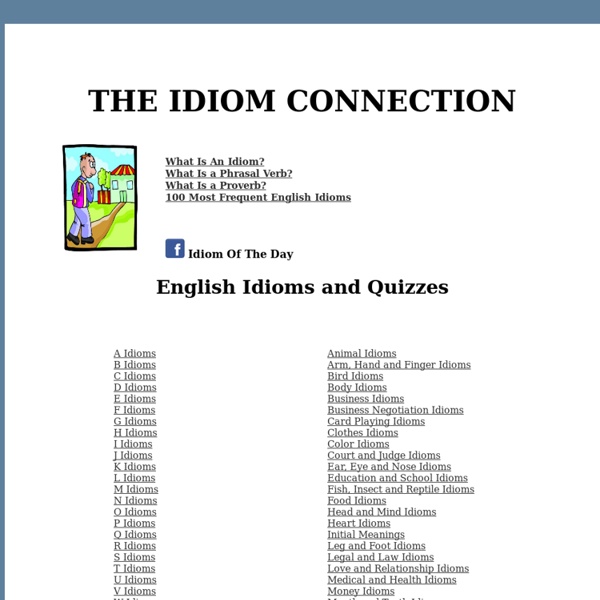 OneLook: General dictionary sites Browse dictionaries of this type: All, General, Art, Business, Computing, Medicine, Miscellaneous, Religion, Science, Slang, Sports, Technology Limit to those that include: All, Chinese, English, French, German, Italian, Spanish Descriptions: Verbose, CompactSort by: Name, Popularity, Word count General dictionaries and glossaries indexed by the OneLook® search engine: AnswerGarden - Plant a Question, Grow Answers! Generate a live word cloud with your audience. Topic (required) Type the topic of your new AnswerGarden. This can be a question or a topic, such as: "What do you think of my website?" More options (optional)

How to Write with Style: Kurt Vonnegut’s 8 Keys to the Power of the Written Word Find a Subject You Care About Find a subject you care about and which you in your heart feel others should care about. It is this genuine caring, and not your games with language, which will be the most compelling and seductive element in your style. I am not urging you to write a novel, by the way — although I would not be sorry if you wrote one, provided you genuinely cared about something. List of French words and phrases used by English speakers Here are some examples of French words and phrases used by English speakers. English contains many words of French origin, such as art, competition, force, machine, police, publicity, role, routine, table, and many other anglicized French words. These are pronounced according to English rules of phonology, rather than French. Around 28% of English vocabulary is of French or Oïl language origin, most derived from, or transmitted by, the Anglo-Norman spoken by the upper classes in England for several hundred years after the Norman Conquest, before the language settled into what became Modern English.

Kurt Vonnegut’s 8 Tips on How to Write a Great Story By Maria Popova The year of reading more and writing better is well underway with writing advice the likes of David Ogilvy’s 10 no-bullshit tips, Henry Miller’s 11 commandments, Jack Kerouac’s 30 beliefs and techniques, John Steinbeck’s 6 pointers, and various invaluable insight from other great writers. Now comes Kurt Vonnegut (November 11, 1922–April 11, 2007) — anarchist, Second Life dweller, imaginary interviewer of the dead, sad soul — with eight tips on how to write a good short story, narrated by the author himself.

The Big Dream Synopsis: The Big Dream is a low intermediate level interactive story, which roughly follows the plot of the Charles Dickens story Great Expectations. It adapts it to a Japanese setting and tells the story of a young Japanese orphan who grows up and leaves his country home for the city and later New York City, where he finally meets the mysterious benefactor who has influenced his life so much.The syntax that we focus on in this story is listed on the first page under contents and there are thirteen episodes so if a class does one episode a week, the story can last roughly a term/semester. The Big Dream Listen to Episode 1: The Graveyard (mp3), voices by Mark White and Hiromi Campbell. Note: this is meant to be an example of what a guided story might sound like when two people engage with it in a classroom setting. 1.

Data Mining Novels Reveals the Six Basic Emotional Arcs of Storytelling Back in 1995, Kurt Vonnegut gave a lecture in which he described his theory about the shapes of stories. In the process, he plotted several examples on a blackboard. “There is no reason why the simple shapes of stories can’t be fed into computers,” he said. 100 Exquisite Adjectives By Mark Nichol Adjectives — descriptive words that modify nouns — often come under fire for their cluttering quality, but often it’s quality, not quantity, that is the issue. Plenty of tired adjectives are available to spoil a good sentence, but when you find just the right word for the job, enrichment ensues. 10 Everyday Words With Unexpected Origins Books Etymology, or the study of the origin of words, is dry, dusty stuff that will give you allergies if you play with it too long. It also happens to be one of our favorite topics—because sometimes a word travels through such a twisted path to get to its modern meaning that all you can do is scratch your head and wonder how civilization manages to keep itself going. Read on to find out what word got its start with people biting the heads off chickens, how a peaceful word became an international symbol of hate, and how wooden shoes changed the world. What it means now: “Completely lacking in subtlety; very obvious.”

Sharifian - Ten Conversation Lessons with Stories, Vocabulary Practice, Questions and Activities The Internet TESL Journal Farzad Sharifianf.sharifian [at] cowan.edu.auEdith Cowan University (Western Australia) Suggestions for Using the Lessons The Story Depending on the main objective(s) of the course, the teacher may choose to read the story aloud asking the students not to look at it or ask the students to read the story to themselves silently and as quickly as possible. Kids explain how banned and challenged books helped them and even saved their lives / Boing Boing By Joan Bertin and Millie Davis Banned Books Week has come and gone but we can be sure of one thing: the coming year will be marked by challenges to the same kinds of books that were controversial this year, and in years past. report this ad Controversies over what books are taught in class or shelved in the school library typically start when an adult—usually a parent or community member—feels that a book selected by teachers and librarians is inappropriate, offensive or objectionable.

50 Obscure English Words to Impress Your Friends According to the Global Language Monitor, English has more than 1,000,000 words (although even large dictionaries tend to contain about a third or a fourth), more than any other language spoken on Earth (that's more than thrice the amount of words in Spanish alone, another leading language in amount of words). Yet, most people only know 5,000 - 6,000! Of course, often, not much more than that is needed; English has an incredible amount of words with the exact same meaning. As said by About.com, English has only 250,000 - 300,000 when only "normal" words are counted; the rest are obsolete words, technical terms, or jargon that has more or less entered our language. A lot of these words are so bizarre, that you wonder why they were ever coined. Here are fifty of such words that never quite caught on.

20 words that once meant something very different Words change meaning over time in ways that might surprise you. We sometimes notice words changing meaning under our noses (e.g., unique coming to mean “very unusual” rather than “one of a kind”) — and it can be disconcerting. How in the world are we all going to communicate effectively if we allow words to shift in meaning like that?