...Said No One Ever. About “…said no one ever” is a phrase often used online to mock something that is generally disliked or of an unpopular opinion. 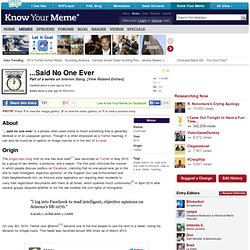 Though it is often employed as a Twitter hashtag, it can also be found as a caption on image macros or in the text of e-cards. Origin The single topic blog “shit no one has ever said” was launched on Tumblr in May 2010 by a group of two writers, a producer, and a lawyer. The first post criticized the manner in which people discuss politics on Facebook, claiming that no one would ever go to the site to read “intelligent, objective opinions” on the Support Our Law Enforcement and Safe Neighborhoods Act, an Arizona state legislative act requiring alien residents to carry their registration documents with them at all times, which sparked much controversy in April 2010 after several groups disputed whether or not the law violates the civil rights of immigrants.

Snowclone. About Snowclones are a type of phrasal templates in which certain words may be replaced with another to produce new variations with altered meanings, similar to the “fill-in-the-blank” game of Mad Libs. 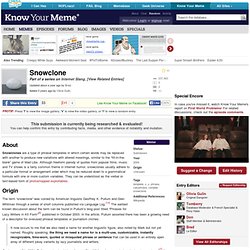 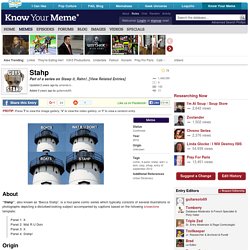 Origin The word “stahp” is an intentionally misspelled phonetic transcription of the word “stop,” which was introduced earlier in August 2011 through Stawp it, Rahn, another image macro series that pokes fun at the MTV’s Jersey Shore cast member Sammi “Sweetheart” Giancola’s accent (shown below, left). The earliest known captioned instance of the series based on a photograph of a scornful-looking dog (shown below, right) was uploaded by Tumblr user jmiliam on March 18th, 2012.

Spread On May 4th, 2012, jmiliam’s set of dog photos were highlighted on the Internet humor site 9gag. Notable Examples Search Interest External References. Swag. About “Swag” is an internet slang term often found in comments, discussion forums and image macros used as a synonym for “swagger,” a type of style or presence that exudes confidence and is sometimes interpreted as arrogance. 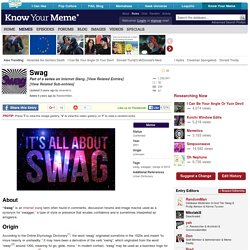 Origin According to the Online Etymology Dictionary, the word “swag” originated sometime in the 1520s and meant “to move heavily or unsteadily.” It may have been a derivative of the verb “swing”, which originated from the word “sway” around 1300, meaning “to go, glide, move.” That Really Rustled My Jimmies. About “That Really Rustled My Jimmies” is an expression that is used to convey feelings of discontent or discomfort in response to someone else’s post in imageboards and discussion forums, most notably on 4chan. 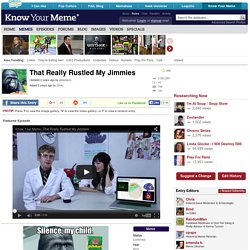 Origin The phrase originates from FunnyJunk. On June 16th, 2010, an image macro of a frowning gorilla with the overlaid text “That really rustled my jimmies” was posted by an anonymous user who has currently deactivated his account. On July 18th, 2012, the image had an overall score of over 100 with nearly 7000 views. The phrase went relatively unnoticed until December 15th, 2010, when a thread was made on 4chan’s /r9k/ board about “times when someone really rustled your jimmies.” TEH. About “Teh” is an Internet slang term derived from the common typographical error of the English definite article “the.” 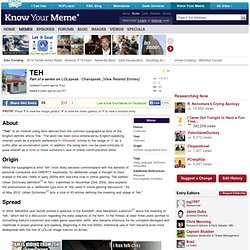 The word has been since embraced by English-speaking internet users as a stylistic preference in l33tspeak, similar to the usage of “1” as a suffix after an exclamation point. In addition, the slang term can be used ironically to pose oneself as a noob or mock someone’s lack of online communication skills. Origin While the typographical error “teh” most likely became commonplace with the advents of personal computers and QWERTY keyboards, its deliberate usage is thought to have started in the late 1990s to early 2000s with real-time chat in online gaming.

Spread In 2004, Metafilter user bshort posted a question in the AskMeFi (Ask Metafilter) subforum about the meaning of “teh,” which led to a discussion regarding the early adaptors of the term. The word has been also adopted by developers and programmers as the name of software projects. Usage Search Interest. This Is Why We Can't Have Nice Things. About This Is Why We Can’t Have Nice Things (also known as Arguecat) is a series of LOLcat-style image macros featuring an angry-looking cat with the catchphrase. 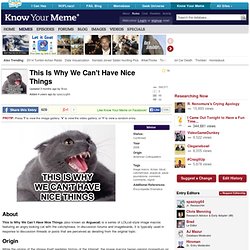 In discussion forums and imageboards, it is typically used in response to discussion threads or posts that are perceived as derailing from the original topic. Origin While the origins of the phrase itself predates history of the Internet, the image macros began gaining momentum on 4chan sometime in 2008. According to online discussions on its roots in popular culture, one of the earliest notable mentions came from Paula Poundstone, an American stand-up comedian who used the phrase in her HBO stand-up special, Cats, Cops and Stuff (1990). In the 1998 movie Mafia! Tl;dr. About tl;dr (abbreviation for too long; didn’t read) is an internet slang expression commonly used in discussion forums as a shorthand response to previous posts that are deemed unnecessarily long and extensive. 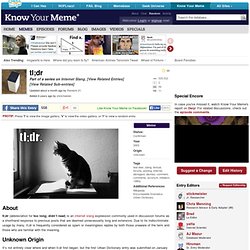 Due to its indiscriminate usage by many, tl;dr is frequently considered as spam or meaningless replies by both those unaware of the term and those who are familiar with the meaning. Unknown Origin It’s not entirely clear where and when tl;dr first began, but the first Urban Dictionary entry was submitted on January 15th, 2003: “Too long; didn’t read.” Spread tl;dr has been adopted into common usage on discussion forums like General Mayhem, 4chan, SomethingAwful and FARK since at least 2003, with the earliest known instance dating back to a discussion thread posted by GenMay user “waptang” on June 19th, 2003. Another Urban Dictionary entry submitted on November 20th, 2003 was later chosen as UD’s Word of the Day on May 16th, 2005.

Usage Related Concept: RTFM External References. Tl;dr. Literally, "Too long; didn't read" Said whenever a nerd makes a post that is too long to bother reading. 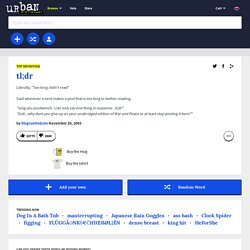 "omg you postwench. i can only say one thing in response - tl;dr" "tl;dr...why dont you give up on your unabridged edition of War and Peace or at least stop posting it here? " The Urban Dictionary Mug Lotsa space for your liquids. Buy the mug.