Based God. Based. Is when you dont care what people think its a way of life Doing what you want how u want wearing what u want the LV book bag looks gay on you idc im based #Based is all about being yourself and not caring what anybody else thinks. 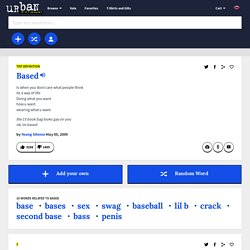 If you followed Lil B The BasedGod on twitter you'd know he's actually a very deep person who constantly talks about being yourself and staying positive. People like myself know what he's doing. He could have easily follow the other thousands﻿ of rappers that try to sound like lil Wayne but he didn't. Your pink G-Shock makes you look gay. Having many girls, being a mansion, swagging to the maximum, and looking like jesus. Based God. Refers to the rapper Lil B. 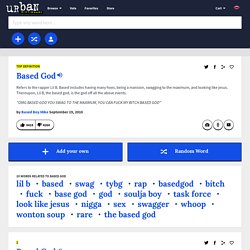 Based includes having many hoes, being a mansion, swagging to the maximum, and looking like jesus. Thereupon, Lil B, the based god, is the god off all the above events. In an interview with Complex, Lil’ B was asked what “based” meant. “Based means being yourself. Not being scared of what people think about you. Thank you Based God. A term coined by the American Rapper Lil B in reference to himself. Banhammer. About The Banhammer refers to the figurative banning tool used by web administrators and forum moderators to prohibit undesirable members from accessing the site, which is typically done by blocking individual IP addresses. 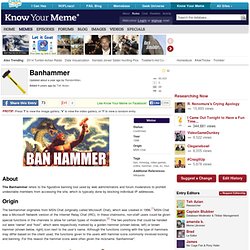 Origin The banhammer originates from MSN Chat (originally called Microsoft Chat), which was created in 1996.MSN Chat was a Microsoft Network version of the Internet Relay Chat (IRC). In these chatrooms, non-staff users could be given special functions in the channels to allow for certain types of moderation. The two positions that could be handed out were “owner” and “host”, which were respectively marked by a golden hammer (shown below, left) or brown hammer (shown below, right) icon next to the user’s name. In 2003, Microsoft closed its unregulated chat rooms due to problems with spam and a constant danger of predators. Spread. Baww. Bro. About Bro is a colloquial term of address used for any person, primarily males, that began as an abbreviated form of the word “brother.” 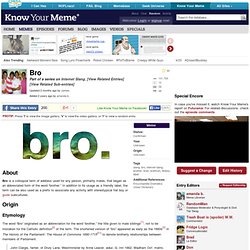 In addition to its usage as a friendly label, the term can be also used as a prefix to associate any activity with stereotypical frat boy or guido subcultures. Origin Etymology The word “Bro” originated as an abbreviation for the word “brother,” the title given to male siblings, not to be mistaken for the Catholic definition of the term. John Clargis, farrier, of Drury Lane, Westminister by Anne Leaver. educ. In 1912, people began using “brother” as a slang term in the United States to address one’s close friends, which became further popularized after it was adopted by the African American community in the early 1970s. Spread The first definition of “bro” was added to Urban Dictionary on January 24th, 2003 and at least 200 definitions have been since submitted to the site.

Bro. Bros ruin everything they touch. 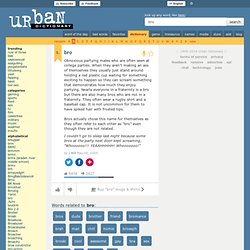 They are deeply racist, yet vulture-ize black culture with attempts to be "down", while living as far from any ghetto as humanly possible. It's because they seek danger, or the illusion of it. A Bro Ho? What is a Bro Ho, you might be asking. A Bro Ho is also known as a Blouser: "Those girls with blonde hair with dark streaks in it, ugg boot wearing, mini skirt flaunting, too much makeup, a wife beater in 30 degree weather, a trucker hat while wearing the above-stated outfit...and they're passed out after two drinks. " Basic Aspects Of Being A 'Bro' Hide captionA beautiful bro-ment: Ryan Lochte and Michael Phelps give each other the traditional arm-wrestle bro-shake at the U.S. 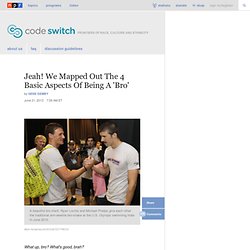 Olympic swimming trials in June 2012. Mark Humphrey/ASSOCIATED PRESS A beautiful bro-ment: Ryan Lochte and Michael Phelps give each other the traditional arm-wrestle bro-shake at the U.S. Olympic swimming trials in June 2012. Bump. About Bump or “bumping” refers to the practice of posting a blank response to a discussion thread for the sole purpose of raising its profile. 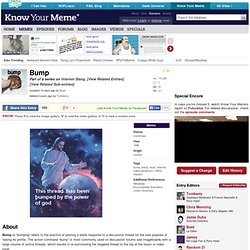 The action command “bump” is most commonly used on discussion forums and imageboards with a large volume of active threads, which results in re-summoning the targeted thread to the top of the forum or index page. Bump. Butthurt. About Butthurt is an online slang term used to describe a strongly negative or overemotional response. 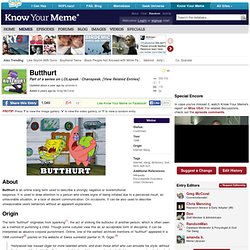 It is used to draw attention to a person who shows signs of being irritated due to a perceived insult, an unfavorable situation, or a lack of decent communication. On occasions, it can be also used to describe unreasonable users behaviors without an apparent explanation. Origin The term “butthurt” originates from spanking, the act of striking the buttocks of another person, which is often seen as a method of punishing a child. “Hollywood has tossed Giger for more talented artists, and even those artist who can emulate his style, without the tears and the hurt butts. Butthurt. Butthurt Dweller.