Om Nom Nom Nom. About Om Nom Nom Nom is an onomatopoeic phrase used to indicate that someone is eating or that a food item is particularly delicious. 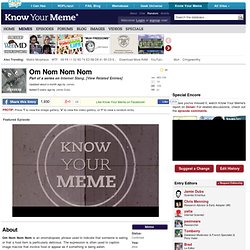 The expression is often used to caption image macros that involve food or appear as if something is being eaten. Origin The expression originated with the character Cookie Monster from the children’s television series Sesame Street, who was invented by the American puppeteer Jim Henson in 1966. OMG. [[ Work in Progress, Editors Needed ]][Need Origin, Spread, Internet Context, Popularity, etc.- if possible] About OMG is an initialism for the popular phrase, “Oh My God” (or occasionally, “Oh My Goodness” or “Oh my Gosh”). 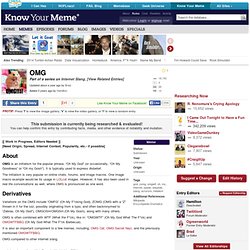 It is typically used to express disbelief. The initialism is very popular on online chats, forums, and image macros. One image macro example would be its usage in LOLcat images. Derivatives Variations on the OMG include “OMFG” (Oh My F*cking God), ZOMG (OMG with a “Z” thrown in it for the lulz, possibly originating from a typo, and often backronymed to “Zebras, Oh My God”), OMGOSH/OMGSH (Oh My Gosh), along with many others. Overkill. About “Overkill” is a slang term that describes using more than what is needed to complete a task at hand. 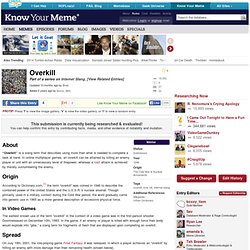 In online multiplayer games, an overkill can be attained by killing an enemy player or unit with an unnecessary level of firepower, whereas a rush attack is achieved by literally outnumbering the enemy. Origin According to Dictonary.com, the term “overkill” was coined in 1946 to describe the combined power of the United States and the U.S.S.R.’s nuclear arsenal. Though primarily used in a military context during the Cold War period, the word gradually came into generic use in 1965 as a more general description of excessive physical force. Oversharing. About Oversharing refers to the act of disclosing unsolicited information about one’s personal history or private life in excess via social networking and media sharing platforms. 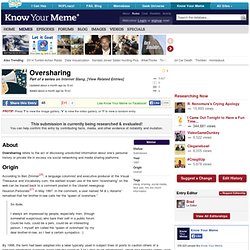 Origin According to Ben Zimmer, a language columnist and executive producer of the Visual Thesaurus and Vocabulary.com, the earliest known use of the term “oversharing” on the web can be traced back to a comment posted in the Usenet newsgroup Houston.Personals in May 1997. In the comment, a user named “M & L Abrams” remarked that her brother-in-law calls her the “queen of overshare.” So dude,I always am impressed by people, especially men, (though somewhat suspicious) who bare their self in a public forum. By 1998, the term had been adopted into a label typically used in subject lines of posts to caution others of a personal information overload, along with the acronym T.M.I (“too much information”), which also became widely used around the same time. Spread Search Interest External References. OWNED (PWNED) Pictured below: [color:blue]pwn (blue), [color:red]pwned (red), [color:orange]own3d (orange) Owned (below: Variations) is a “leetspeak” slang word, derived from the traditional meaning of the verb “own”, as meaning to appropriate or conquer to gain ownership. 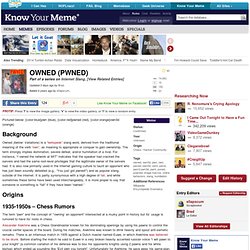 The term strongly implies domination, severe defeat, and/or humiliation of a rival. For instance, “I owned the network at MIT” indicates that the speaker had cracked the servers and had the same root-level privileges that the legitimate owner of the servers had. It is also now primarily used in the Internet gaming culture to taunt an opponent who has just been soundly defeated (e.g., “You just got pwned!”) And as popular slang, outside of the internet. 1935-1950s – Chess Rumors The term “pwn” and the concept of “’owning’ an opponent” intersected at a murky point in history but its’ usage is rumored to have its’ roots in chess. 1960s-1980s – Chess vs. "P"wned 1990s – Hacking and Gaming 2000s and Beyond Definitions Popular Culture - - - Party Hard. About Party Hard is a phrase often paired with a GIF of someone moving or dancing violently (See also: The Club Caan’t Even Handle me Right Now) Origin The phrase “Party Hard” originates from a song by the same name, sung by Singer-Songwriter Andrew W.K.. 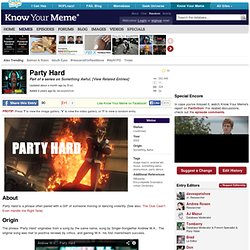 The original song was met to positive reviews by critics, and gaining W.K. his first mainstream success. On March 26th 2003, in a thread entitled “In this thread we PARTY HARD!!!!” Spread The phrase Party Hard soon spread to other sites, including 4chan and Tumblr. Andrew W.K. 4chan incident Starting from 7:00 PM EST on February 13 2011, Andrew W.K. held a Q&A on 4chan’s /mu/ music boards, with the sole purpose of crashing the site. Search Interest External References. Pew Pew. 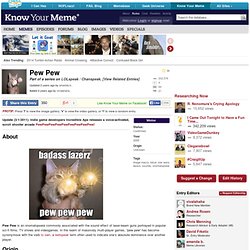