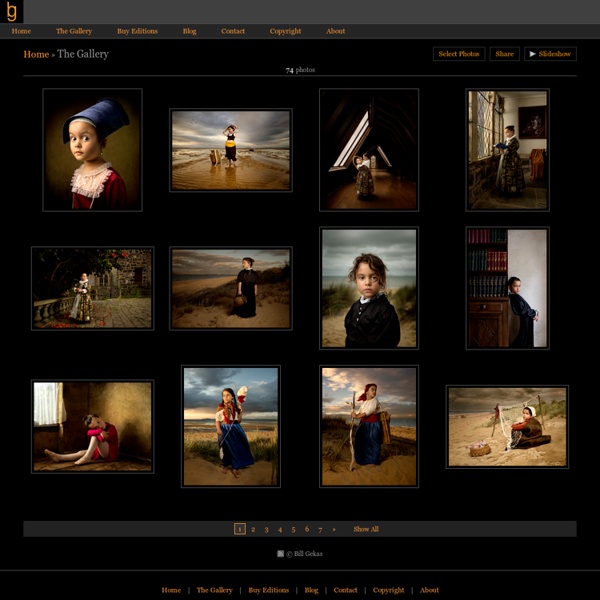 Road Trip with her Son Voici Justin Kurland : une photographe américaine qui a décidé lorsque son fils avait 3 mois de partir en road-trip et de l’emmener avec elle jusqu’à ses 5 ans. Cette expérience, l’artiste en a fait part dans le livre collaboratif « How we do both : Art and Motherhood » contenant des images très touchantes. It's Guest Blog Wednesday featuring Regina Pagles! Hi! My name is Regina Pagles and I am a portrait photographer residing in the rural community of Springdale, Utah (Pop. 450), just outside of Zion National Park. I have a small studio where I have been taking portraits of friends and family since I discovered studio lighting in 2010. I have combined the techniques learned from my biggest inspirations, Peter Hurley (expression), Sue Bryce (posing), Don Giannatti (lighting) and Scott Kelby (post processing) to develop and hone my own style. In the spirit of â˜paying it forward,' I would like to share with you what I have learned and the techniques I use, in honor of those that have inspired me and who have offered their knowledge so graciously. I will take you through my post processing workflow, using a recent image of one of my favorite subjects, model Yolanda Damon Harris. Straight out of the camera, you can see the image doesn’t look too good… I begin by making initial adjustments in Lightroom and the image starts to improve. Next in LR:

Toy Stories | gabriele galimberti If Riverboom’s photographer Gabriele Galimberti had happened to shoot me, aged 6 and surrounded by my favorite toys, he would have seen the following: plastic medieval weaponry; assorted Lego (Space, Castle and Pirate); an inflatable Tyrannosaurus rex (punctured slowly into extinction); a Superman action figure (I lost it and hyperventilated with grief); a pair of cuddly rabbits (Sally and Billy); toy cars; a tiny guitar; a plane you launched with an elastic catapult; a replica pistol I thought my mum didn’t know about. Everyone remembers their childhood toys. The fact that I can recall how most of mine tasted better than I can remember the names of my primary school teachers says everything you need to know about the universe kids inhabit. But how they play can reveal a lot. Yet even children worlds apart share similarities when it comes to the function their toys serve. Ultimately, the toys on display reveal the hopes and ambitions of the people who bought them in the first place.

Win 1 of 5 signed copies of ‘Metamorphosis’ by Rupert Soskin - Photo Answers Win a 1 of 5 signed copies of ‘Metamorphosis’ by Rupert Soskin, published by Bloomsbury. Hardback, £30.00. A unique project to photograph creatures that transform their bodies as they grow at every stage of the process. Insects truly are the ugly ducklings of the natural world. How does something as beautiful as a butterfly begin life as little more than a fancy maggot? This book illustrates some of the dramatic transformations insects undergo in their life cycles and explore why evolution has arrived at these remarkable solutions to survival. The book is divided into two main sections, the first being insects that undergo partial metamorphosis such as dragonflies and grasshoppers. About the author: Rupert Soskin is a photographer, writer, presenter, naturalist and explorer. Bloomsbury

Canteen Magazine's Naked Judging: Bear Kirkpatrick Just for the record, Bear Kirkpatrick is a friend of mine, so I was feeling his pain as the judges were less than careful when treading on his photographs in Canteen Magazine’s Live Naked Judging round. I really appreciate Bear participating in this post today. I would have opened the vodka bottle and pulled the covers over my head, but as he states, getting an art beating once in awhile is a good thing. Bear realizes he made a crucial mistake that is common to so many photographers – not all the images he submitted were from the same series. Eligible Work Work derived from all traditional and digital photographic processes, as well as mixed-media work that is primarily photo-based, will be considered. Response from the photographer: so to get a beating once in a while (not too often!) The Thought of Thinking This was the image that got some positive response… They Were Saved By Whim, Without Turn A Portrait of May Dryer Images from Sexual Selection Images from Wall Portrait

The Strange Beauty of Airports Photographed From Above - John Metcalfe Do airports have personalities? If so, JFK International Airport must possess a dark and complex intelligence: Broad flats of black pavement suggest an ocean of serene thoughts, while elsewhere snaking streams of roadways hint at either mathematical genius or full-blown schizophrenia. But that's probably reading too much into the artwork of Jeffrey Milstein, a New Yorker who's given much of his life to documenting airplanes and their surroundings. Airports are just cool to look at, especially from way up in the sky where you can see the megalithic structures in their awesome entirety. Growing up in Los Angeles, Milstein would often trek to LAX to film planes landing with his 8-millimeter videocamera. Most people know Milstein for his photographs of the underbellies of aircraft, which he captured by standing at the end of runways while commuter jets blasted overhead. (Above: Newark Liberty International Airport) (Above: also Newark) Photos used with permission of Jeffrey Milstein.

July | 2013 | Chris Crisman Photography We work like crazy. As a studio manager/producer/assistant/blogger life very rarely slows down to the point where I can step back and reflect on it. When it does though, I find myself mulling over aspects of this job that might seem so inconsequential, but for me hold deeper meanings. I’ve decided to start this monthly series on the blog to take a minute and stop, reflect, and write about some of the aspects of being a studio manager that really impact me. These are my studio manager meditations. Up in the Air. Airports are never fun. Time to board, back in line. Sitting on the runway, there’s a curious excitement that I being to feel. In the sky, hurtling along in a aluminum tube affords a somewhat uninterrupted opportunity to catch up on email or work through a backlog of photo editing, but the most value that I can derive from flying is the simple quiet that an airplane can offer. Subtract your fellow travelers from the equation, close your eyes for just a moment, stop and think.