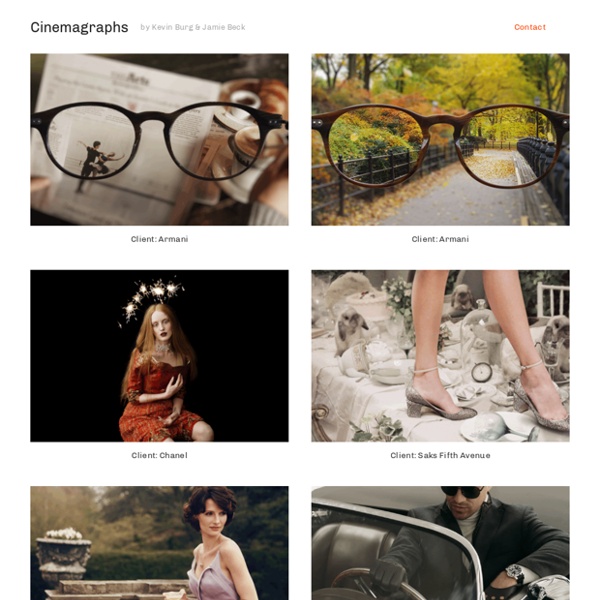 How to Make Cinemagraphs — Still Photos that Move Like Movies! Yup, that picture moves. Nope, you’re not going crazy! ‘Cause who said photos can only feature “still” life? Inspired by the moving pictures created by photographer and motion designer duo Jamie Beck and Kevin Burg, we set out to make the magic happen. Cinemagraph: 28 Still Photos With Subtle Motion So today we’re going to showcase animated GIF artwork but there are not the regular GIF we use on websites. These are beautiful twist from somehow nasty animated Gif artworks with the use of high quality photos from modern photography, and the pioneer, Jamie Beck and Kevin Burg called it – Cinemagraph. (Image source: From Me To You) Like what you’ve seen in most GIF animation, cinemagraph is a product of still photo with minor elements moving on. It’s nothing impressive on technique but what makes cinemagraph unique is it brings back certain part of the photo to life, thus making the entire photo more realistic, attractive and sometimes even thought-provoking, just like the magical newspaper from the movie Harry Potter. Dozens of photographers have found this technique interesting, so do we.

Romain Laurent We will always have French kissing.Quoiqu’il arrive, on se roulera toujours des pelles. This past week has been as intense as it gets for a lot of people in Paris. I happened to be visiting for a couple week. We were all affected one way or another. canvass editor video In response to the Covid-19 emergency, in almost all European countries the suspension of learning activities and closure of schools and training agencies has been decided as well as the simultaneous activation of e-learning. The platform developed within the framework of the CAnVASS+ Content Audio Video mAnagement SyStem; (link is external) project, already available free of charge, allows the teacher to customize lessons, according to the needs of both the class group and individual students. It is a tool designed to allow the creation of lessons in five simple steps, using an intuitive and easy-to-use interface.The software features avatars and interactive scenarios, in which audio files, text files, images, in- depth focus boxes, etc. can be inserted. Through the CAnVASS+ platform, the learning content will be transformed into a video file that can be shared through Youtube, Facebook, Twitter.

Venezuela. Surroundings of Angel Falls In May of 2011 Dima Moiseenko left for Venezuela to shoot the highest waterfall in the world — the Angel Falls. The shooting took two days and was very complicated both in its technical aspect and because of the weather. Dima shot the Angel Falls itself, a few neighboring waterfalls in tepuys and spheres over the gold mines on his way back. Now we represent the first part of the shooting — a virtual tour in Venezuela over the Angel Falls' surroundings, the Churun-meru (Dragon) and Cortina Falls as well as over the gold mines. And now the author tells:

Cinemagraphs About Cinemagraphs are partially animated photographs in which a subtle movement action occurs. The effect is produced by taking a series of continuous shot photographs or a video recording and compositing the frames into an animated GIF file. About Cinemagraphs The History of Cinemagraphs A Cinemagraph is an image that contains within itself a living moment that allows a glimpse of time to be experienced and preserved endlessly. Visual Graphics Artist Kevin Burg began experimenting with the .gif format in this style in 2009 but it wasn't until he partnered with photographer Jamie Beck to cover NYFW that Cinemagraphs were born. Marrying original content photography with the desire to communicate more to the viewer birthed the cinemagraph process. Starting in-camera, the artists take a traditional photograph and combine a living moment into the image through the isolated animation of multiple frames. To quote supermodel Coco Rocha "it's more than a photo but not quite a video".

How To Make a Cool Cinemagraph Image in Photoshop No doubt you’ll have heard of the term Cinemagraph since it exploded onto the Internets. Originally coined by Photographers Kevin Burg and Jamie Beck, a cinemagraph is a clever revival of the classic animated GIF. It combines features of video and photography to create a the illusion of a still image but with cool motion effects. Let’s take a look at how to create your own animated GIF cinemagraph by playing around with Photoshop’s animation tools. Some of the best cinemagraph examples can be found on the creators’ own website. The Define School Our Community DEFINE offers photographers the opportunity to refine their skills while living in any area of the world with any type of daily schedule! Due to this our community is truly a melting pot of artists representing every continent (yes, even Antarctica!). Click here to learn more. Get Involved