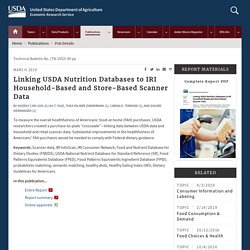 Page, Thea Palmer Zimmerman (1), Carina E. Weighing up the costs of treating 'lifestyle' diseases in South Africa. While diabetes, hypertension and hypercholesterolaemia often don’t cause symptoms, they have debilitating and deathly consequences which can include heart attacks, angina, heart failure, amputation, stroke, kidney disease, and blindness. 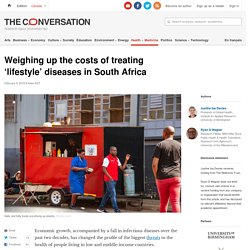 These are now the most common causes of death and disability in many low and middle-income countries. But unlike many infectious diseases, there’s no course of antibiotics to treat them. Obesity and lack of activity contribute to the rise of diabetes, hypertension, and hypercholesterolaemia. Making China safe for Coke: how Coca-Cola shaped obesity science and policy in China. Soda, salad, and socioeconomic status: Findings from the Seattle Obesity Study (SOS) 1. 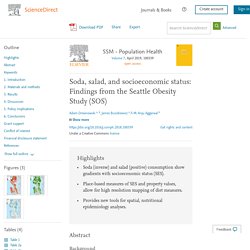 Introduction Health and place are intrinsically interconnected. Several studies have examined the ways in which the place of residence can impact diet quality, physical activity, and health outcomes (Drewnowski et al., 2014, Renalds et al., 2010, Caspi et al., 2012a, Berrigan et al., 2015). The likely impact of the built environment (BE) on diets and health (Renalds et al., 2010) has been measured in terms of access to healthy foods, neighborhood walkability, population density, or land use mix (Caspi, Sorensen, Subramanian, & Kawachi, 2012b). However, evaluating the relation between BE and diet quality can be complicated by unobserved variables, including many related to individual and area socioeconomic status (SES) (Drewnowski et al., 2014, Berrigan et al., 2015, Caspi et al., 2012b, Drewnowski et al., 2012). Thirty years of fast food: Greater variety, but more salt, larger portions, and added calories. 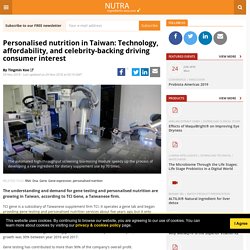 It operates a gene lab and began providing gene testing and personalised nutrition services about five years ago, but it only noticed a jump in the number of customers in the recent three years. Specifically, the number of customers is steadily on the rise for TCI Gene. Bagging A Cookbook Bargain Over Christmas. Whether a gift for themselves or a gift for a friend, Australians are hungry for cookbooks, especially in the final weeks leading up to Christmas. 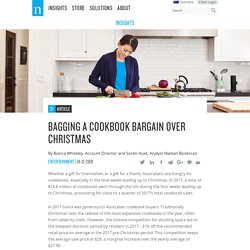 In 2017, a total of $14.8 million of cookbooks went through the tills during the four weeks leading up to Christmas, accounting for close to a quarter of 2017’s total cookbook sales. In 2017 Santa was generous to Australian cookbook buyers. Traditionally Christmas sees the release of the most expensive cookbooks in the year, often from celebrity chefs. However, the intense competition for stocking space led to the steepest discount period by retailers in 2017 - 31% off the recommended retail price on average in the 2017 pre-Christmas period.

This competition keeps the average sale price at $29, a marginal increase over the yearly average of $27.90. In the Crowded U.S. Beer Market, Shelf Space is Key to Maximizing Sales. When it comes to variety and innovation, few categories are as bubbly as the U.S. beer market. 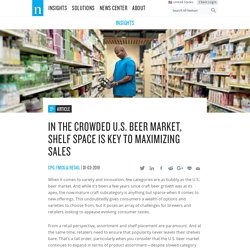 And while it’s been a few years since craft beer growth was at its apex, the now-mature craft subcategory is anything but sparse when it comes to new offerings. This undoubtedly gives consumers a wealth of options and varieties to choose from, but it poses an array of challenges for brewers and retailers looking to appease evolving consumer tastes. One of America’s biggest hospitals invests in the meal-delivery space. New York City banned trans fats a decade before the rest of the country. New study shows eaters are healthier for it.

AquAdvantage, the first GMO salmon, is coming to America. La provenance des aliments consommés au Québec : l'exemple de la viande de porc. Quinoa, chou vert frisé et camerise : des cultures émergentes qui occupent de plus en plus de superficie au pays. Analysing the use of the Australian Health Star Rating system by level of food processing. The results reveal not only is the HSR being displayed mostly on UP foods but in three-quarters of instances these UP foods were displaying ≥2.5 HSRs. 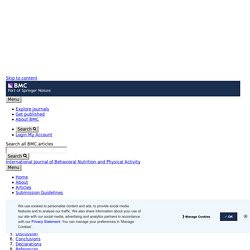 However, a significant difference was observed between the median HSR scores of all new MP, PCI, P, and UP food products sampled indicating the HSR has some power to differentiate between foods in accordance with their level of processing. The public health challenge is that this differentiation power operates as a form of fine control within a system that more fundamentally is calibrated poorly. Fish, fishing and Brexit – Food Research Collaboration. Brexit and Wales: A fresh approach to food and farming? – Food Research Collaboration. UN calls for action on obesity but stays silent on fat tax and labelling. The UN General Assembly backed the resolution, ‘Global health and foreign policy: a healthier world through better nutrition’, by a recorded vote of 157 in favour to two against, with Libya and the United States opposing the text. 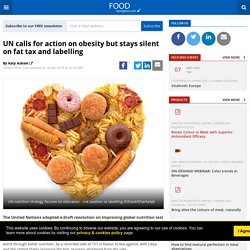 Germany calls for food manufacturers to voluntarily reduce sugar, fats and salts. The strategy aims to lower the total number of calories in processed foods, as well as reduce industrial trans and saturated fatty acids, and improve nutrient composition, by 2025. 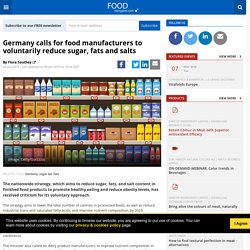 According to Germany’s federal minister of nutrition, Julia Klöckner, who announced the plan last month, food manufacturers are to reduce sugar content in breakfast cereals by 20%, and in soft drinks by 15 to 20%. Portion sizes should also be reduced, she told delegates at a press conference. The minister also called on dairy product manufacturers to improve nutrient composition in foods and beverages targeting children and young people.

Increased levels of dietary fibre in breakfast cereals would also be welcomed, she continued. The initiative (available here​ in German), which relies on voluntary commitments by the food industry, is due to launch early this year. WHO appeals to policymakers: ‘A healthy diet is a sustainable diet’ According to the World Health Organization (WHO), few dietary guidelines exist that take sustainability into account. 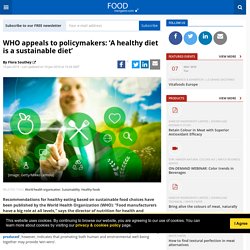 Its recently published information sheet ‘A healthy diet sustainably produced’​​, however, indicates that promoting both human and environmental well-being together may provide ‘win-wins’. “Current food production is known to have a major impact on the environment – accounting for 20-30% of greenhouse gas emissions and two-thirds of water use as well as being the leading cause of deforestation and contributing to biodiversity loss – while climate change and other environmental changes threaten food systems’ capacity to provide healthy diets for all in the future” – World Health Organisation ​ “We see that healthy diet is a key determinant of health.

British Nutrition Foundation launches portion size guide: ‘It’s not just about eating less but eating differently’ The guide, which uses simple hand and spoon measurements to estimate portions, is designed to complement the UK government’s Eatwell Guide. Bridget Benelam, a nutrition scientist at the BNF, explained that excessive portion sizes are thought to be a factor contributing to the country’s obesity epidemic.

According to UK government data, 57% of UK women and 66% of men are classified as either overweight or obese. “There are many factors behind current levels of obesity but portion size is likely to be one of them. Health tax in Qatar: Price hikes as 100% levy on alcohol, energy drinks, and pork introduced. A 100% tax is imposed on alcohol, energy drinks, and pork, while the tax rate for sugary drinks is 50%, the country’s Ministry of Finance said as part of its budget announcement. The law was implemented on January 1. Since the implementation, many alcohol and energy drinks products saw a price hike.

For instance, a 250ml Red Bull energy drink, previously sold at QR$4.75 (US$1.30), is now QR$9.50 (US$2.60), while a 500ml Monster energy drink and the Monster Khaos Drink now cost QR$22.50 (US$6.10) when it used to be QR$11.25 (US$3.09), the Gulf Times ​reported. Some firms, however, have said that the tax has limited impact on its current product offerings in Qatar. For instance, Nestlé Middle East will only see a single product being affected by the tax implementation, spokeswoman Lynn Al Khatib told FoodNavigator-Asia​. California residents can now earn rewards for buying milk. How is the government shutdown impacting the food industry? Dive Brief: As the government shutdown enters its third week, farmers, producers and the market are expected to feel added pressure as the U.S.

Department of Agriculture delays publishing several reports they rely on to make decisions, Bloomberg reported.These reports — on supply-and-demand estimates, grain stockpiles and winter-wheat seedings and crop-export sales, among others — will eventually be released, but it will take time to gather and analyze the data after the shutdown ends, USDA Chief Economist Robert Johansson told Bloomberg.Shutdown-related squeezes could hit other USDA and Food and Drug Administration policies, programs and services, according to Food Ingredients First. USDA food safety inspectors who look for problems that may lead to an outbreak are working without pay while their counterparts at FDA are working on a limited basis, which hampers prevention of foodborne illness outbreaks, Business Insider reported.

Due to differences in food prices and other factors varying across the State agencies that administer WIC, the average cost of providing these supplemental foods varies substantially: the average monthly food cost per person during fiscal 2017 ranged from $27.08 in Texas to $50.94 in New York. Examining ways to contain food costs, including the prices charged by the stores authorized to redeem WIC benefits, provides information to help ensure the efficient use of Federal funds. Many States authorize a mix of store types to redeem WIC benefits to promote adequate participant access to the benefits. «Viens manger!», un livre gratuit rempli de recettes et de trucs rusés pour les étudiants.

Apprendre à cuisiner des plats sains, savoureux, à peu de frais? UK appoints food supplies minister amid fears of no-deal Brexit. The government has appointed a minister to oversee the protection of food supplies through the Brexit process amid rising concerns about the effect of a no-deal departure from the European Union. The MP David Rutley, a former Asda and PepsiCo executive, was handed the brief at the Department for Environment, Food and Rural Affairs earlier this month. Defra said that Rutley, who once ran home shopping and e-commerce businesses at Asda, was merely taking on responsibilities already held by other ministers. He said: “It is an honour to join the Defra ministerial team at such an important time.

La montée de l'obésité au Québec. A new interministerial strategy for the promotion of healthy eating in Portugal: implementation and initial results. The challenge of a food and nutrition policy to tackle non-communicable diseases In order to address the public health problem of non-communicable diseases (the main cause of morbidity, disability and mortality) a new health policy approach with a focus on efficient prevention is necessary. Within this approach, the need for the promotion of a healthy diet emerges as a top priority. Unhealthy dietary habits are closely linked to the most prevalent chronic diseases, and represent the main risk factor for the burden of disease in Portugal [1]. In recent years, nutrition has been widely discussed on the Portuguese public health agenda, with Portugal taking important steps towards the implementation of a food and nutrition policy.