So how DO they make jeans for $7? Kmart, Target and Big W locked in a head-to-head battle to make the cheapest denim. Australia’s leading retailers such as Big W, Kmart and Target have all engaged in a mighty war battle to offer jeans from $7Daily Mail Australia put the cheap jeans to the test and voted Kmart as the best pair of jeans from the three retailersBut an Oxfam spokeswoman said consumers need to ask themselves if workers are paid enough to produce garments this cheapThe Bangladesh Accord on Fire and Building Safety was established in 2013 to ensure that all garment factories in Bangladesh are safeAll three retail giants have signed up to the accord By Cindy Tran for Daily Mail Australia Published: 01:03 GMT, 7 November 2014 | Updated: 21:09 GMT, 7 November 2014 Thrifty consumers with an eye for a bargain can score a pair of jeans for as little as seven dollars. 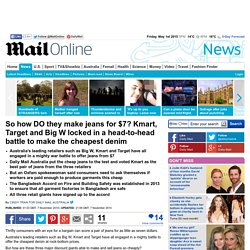 Economics Student Society of Australia (ESSA) A grandiose invite-only launch party, performers flown in from California and a queue of thousands eagerly waiting for its doors to open – H&M’s recent opening in Melbourne was nothing less than a spectacle. 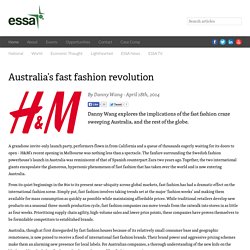 The fanfare surrounding the Swedish fashion powerhouse’s launch in Australia was reminiscent of that of Spanish counterpart Zara two years ago. Together, the two international giants encapsulate the glamorous, hypersonic phenomenon of fast fashion that has taken over the world and is now entering Australia. From its quiet beginnings in the 80s to its present near-ubiquity across global markets, fast fashion has had a dramatic effect on the international fashion scene. Simply put, fast fashion involves taking trends set at the major ‘fashion weeks’ and making them available for mass consumption as quickly as possible while maintaining affordable prices. A Silver Lining to Australia's Fashion Crisis? SYDNEY, Australia — Although Australia is the only advanced economy that did not enter a deep recession as a result of the global financial crisis, today, the country’s fashion industry is facing tough times, affecting established retail chains, independent designers and luxury boutiques alike. 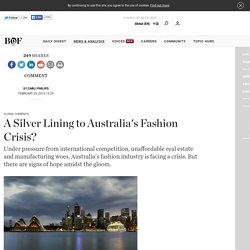 Among them are womenswear retailer Ojay; Bettina Liano, which went into liquidation for the second time in two years; and premium brands Kirrily Johnston and Lisa Ho, both of which were forced to close late last year. Marnie Skillings, Colette Dinnigan and George Gross & Harry Who have also shut shop, while Grab Jeans, Little Joe Woman and Belinda International were all narrowly rescued by administrators. Alannah Hill and Kit Willow recently departed their eponymous brands under contentious circumstances. And things remain challenging for cult streetwear brand Ksubi, which fought off liquidators in 2010, and embattled surf giant Billabong, which has struggled since 2008.

Productivity-agenda-Jun14.pdf. RC-Outlook-Advisory-May13.pdf. PwC Australia - RETAIL & CONSUMER - Publications - Outlook. Welcome to the March 2015 edition of R&C Outlook Whilst retailers had a a stronger 2014 than previous years, it was still challenging and 2015 seems to continuing along the same path despite a substantial reduction in fuel prices and continuing low interest rates. 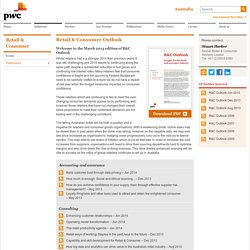 Many retailers feel that consumer confidence is fragile and the upcoming Federal Budget will need to be carefully crafted to ensure we do not have a repeat of last year when the budget measures impacted on consumer confidence. OECD Economic Surveys: Australia 2014. OECD Better Life Index. How’s Life? 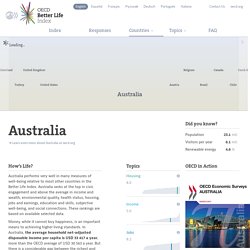 Australia performs very well in many measures of well-being, as shown by the fact that it ranks among the top countries in a large number of topics in the Better Life Index. Money, while it cannot buy happiness, is an important means to achieving higher living standards. In Australia, the average household net-adjusted disposable income per capita is 31 197 USD a year, more than the OECD average of 23 938 USD a year.

But there is a considerable gap between the richest and poorest – the top 20% of the population earn almost six times as much as the bottom 20%. In terms of employment, over 72% of people aged 15 to 64 in Australia have a paid job, above the OECD employment average of 65%. Having a good education is an important requisite for finding a job. In terms of health, life expectancy at birth in Australia is almost 82 years, two years higher than the OECD average of 80 years. For more information on estimates and years of reference, see FAQ section and BLI database.

Kmart, Target and Big W: Should you buy their super-cheap jeans? Australian companies remain well behind those elsewhere in the developed world in terms of ensuring their products are ethical. 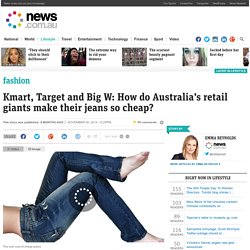 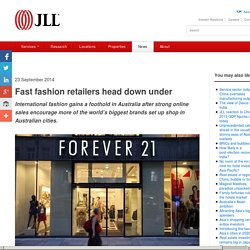 Foreign retailers are flocking to Australia to invest in bricks and mortar after finding their feet online, according to retail experts at JLL. E-commerce adoption in Australia is high – largely because of its remote geography – and online shoppers spend more per purchase than anywhere else in the world. As a result, city high streets have been dominated by home-grown brands, until now. Forever 21 is the latest US-based fashion house to set up shop in Australia’s major cities, following moves from American retail giants, including Volcom, Tommy Bahama, Brooks Brothers, American Eagle and Victoria’s Secret. Fast fashion – can you keep up with global trends sustainably and ethically? - The stream of fast fashion hitting Australian shores is about to become a deluge. 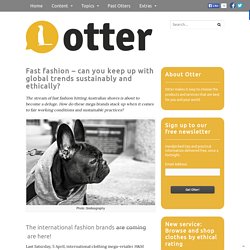 How do these mega brands stack up when it comes to fair working conditions and sustainable practices? Photo: Gratisography The international fashion brands are coming are here! 2014_abf_annual_report_and_accounts. Associated British Foods plc - About us. Primark to open in the United States. Primark, which is owned by conglomerate Associated British Foods, said it had conducted “extensive research” before deciding to expand into the US. 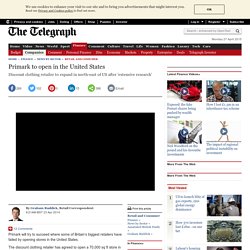 George Weston, chief executive of ABF, said: “We think the combination of up-to-date fashion and great price points in a good shopping environment will be attractive to US shoppers.” Mr Weston said that H&M, Uniqlo and Zara had demonstrated that international clothing retailers can prosper in the US. “We don’t open in hope they will be successful, we do it when the offer is right,” Mr Weston said of Primark’s international expansion.

The move across the Atlantic will initially cost about £1m to £2m, but Mr Weston said Primark is prepared to invest “a lot” if the shop in Boston proves successful. Primark will open in the Burnham Building in the heart of the city towards the end of 2015. Primark edition 15 full. Primark report. Primark report. Primark - Associated British Foods. H&M opens first Australian store amid concerns over fast fashion. By Clare Rawlinson Updated The opening of fashion behemoth H&M's first Australian store has been welcomed by thousands of eager shoppers, but others in Australia's struggling retail sector have expressed concern. 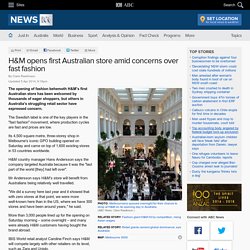 The Swedish label is one of the key players in the "fast fashion" movement, where production cycles are fast and prices are low. Its 4,500 square metre, three-storey shop in Melbourne's iconic GPO building opened on Saturday and came on top of 1,600 existing stores in 53 countries worldwide. H&M country manager Hans Andersson says the company targeted Australia because it was the "last part of the world [they] had left over". Australian retailers struggle as foreign fashion chains enter the market to cash in on strong economy. Updated The arrival of large and prestigious international fashion chains in Australia is threatening local retailers who are already struggling with slow consumer spending and confidence, and competition from online shopping. Big overseas brands like Zara, H&M, Topshop and GAP have been flooding into Australia to challenge local retailers and cash in on what they regard as a strong Australian economy.

Commercial property director at Knight Frank, Richard Jenkins, said he understands why the companies are doing it. Bring Penneys/Primark to Australia! International analysis: How Primark could build an American empire. Primark to enter US market with Boston store. Primark, the fashion store that brought the £3 jumper dress to the British shopper, is to open in the US as it attempts to become a global chain. The budget retailer, owned by Associated British Foods, will open its first store in Boston, Massachusetts, in 2015 and said it was in negotiations to open up to eight further stores in north-east America, with warehousing to support them. America has proved to be a leap too far for most UK retailers: Marks & Spencer, WH Smith, Sainsbury's and, most recently, Tesco have all seen their stateside ventures founder.