VETERINARY WORLD 11/09/21 Tuberculosis prevalence in animals and humans in the Republic of Kazakhstan. Research (Published online: 11-09-2021) 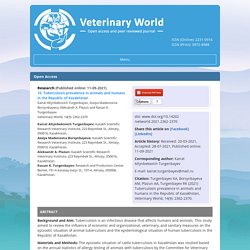 RESEARCH, SOCIETY AND DEVELOPMENT 21/07/21 Epidemiology of bovine tuberculosis in South America. FRONT. VET. SCI. 03/08/21 Whole Genome Sequencing Links Mycobacterium bovis From Cattle, Cheese and Humans in Baja California, Mexico. Introduction Bovine tuberculosis (bTB), most commonly caused by Mycobacterium bovis, is characterized by the formation of granulomas in the lymph nodes and lungs of infected individuals, though other organs may also be affected (1, 2). 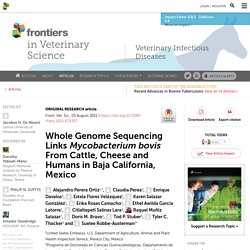 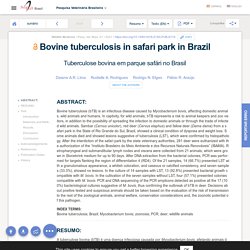 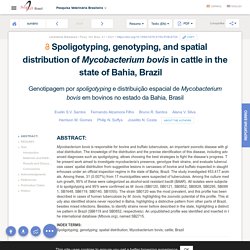 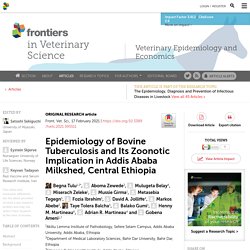 It is a chronic infectious disease of animals characterized by the formation of granulomas primarily in the lungs, lymph nodes, intestine, and kidney. M. bovis has the widest host ranges of all MTBc organisms and can readily be transmitted to humans or a variety of domestic and wild animals (1). The most common route of transmission to people is through the consumption of unpasteurized dairy products and inhalation of infectious droplet nuclei (2). In 2019 alone, the World Health Organization (WHO) reported that M. bovis was responsible for 143,000 new human TB cases and 12,300 deaths (3). Many developed nations have reduced or eliminated bTB from their cattle population by implementing effective control strategies that include testing and culling of infected animals, active surveillance, and restrictions of movement in affected areas (5–7). OIE - REV.SCI. TECH. OFF. INT. EPIZ. - 2018 - Isolation and analysis of the molecular epidemiology and zoonotic significance of Mycobacterium tuberculosis in domestic and willife ruminants from three states in India. 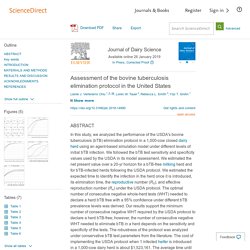 The pathogen can be spread from infected cattle to other warm-blooded animals and humans through aerosol discharges, including saliva, urine, and manure contact; through feeding and watering sites; and by consuming unpasteurized milk or colostrum from infected animals. Animals infected with bTB are hard to identify from clinical symptoms alone. FRONT. VET. SCI. 02/10/18 Risk of Introduction of Bovine Tuberculosis (TB) Into TB-Free Herds in Southern Bahia, Brazil, Associated With Movement of Live Cattle. Introduction Bovine tuberculosis (TB), caused by M. bovis, is a zoonotic disease of chronic evolution, characterized by granulomatous lesions in cattle and buffalo with an impact on public health and trade. 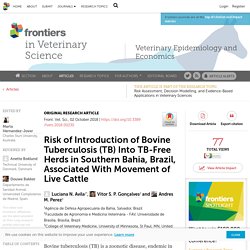 Milk and beef from countries in which TB is endemic may suffer restrictions on exports into disease-free regions, impacting on the national economy through price reduction of the commodity, and market loss (1–3). With the objective of reducing TB impact on human and animal health, the Brazilian Ministry of Agriculture and Livestock (MAPA) established, in 2001, the National Program for Control and Eradication of Bovine Brucellosis and Tuberculosis (PNCEBT). Control measures regulated in the PNCEBT include the voluntary certification of TB-free farms by regular testing-and-culling of cattle and subsequent restriction on animal movements from infected farms (1). The State of Bahia had 22 TB-free certified farms when this study was conducted. BMC 25/08/17 Molecular characterization of bovine tuberculosis strains in two slaughterhouses in Morocco.

Bovine tuberculosis (BTB) is a chronic granulomatous caseous-necrotising inflammatory disease that mainly affects the lungs and their draining lymph nodes, it can also affect other organs, depending on the route of infection [1, 2, 3]. 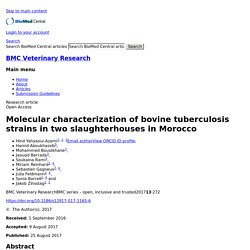 BTB is caused by Mycobacterium bovis, which belongs to the Mycobacterium tuberculosis complex (MTBC). M. bovis has the particular ability to infect a wide range of host species other than cattle (livestock, wildlife and pets) and humans, [3, 4], however, cattle remain the most important reservoir for M. bovis [5]. There exist important wildlife reservoirs like the badger (Meles meles), the Possum (Trichosurus vulpecula) [4]. M. bovis can be transmitted between animals by inhalation of aerosols and the ingestion of contaminated food. The transmission is enhanced by many risk factors, mostly related to intensive livestock system [6]. Arq. Inst. Biol. vol.84 São Paulo 2017 Epub Apr 13, 2017 State of tuberculosis in sheep bred with dairy cattle in the southwest region of Maranhão.

J Vet Sci. 2016 Sep; 17(3): 427–429. Mycobacterium bovis infection in a wild sow (Sus scrofa): the first case in Korea. BMC 25/05/16 Prevalence and risk factors of bovine tuberculosis in dairy cattle in Eritrea. The current study included more than half of the dairy cattle population of Eritrea and reports an overall prevalence of BTB at animal (11.3 %) as well as at herd (17.3 %) level. 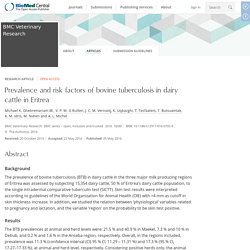 The individual animal BTB prevalence differed between the three regions included, ranging from 21.5 % in Maekel to 7.5 % in Debub and 0.2 % in Anseba. The BTB prevalence in skin test positive herds was not uniform; it was highest (37 %) in Maekel, followed by Debub (30 %), and Anseba (2 %). The risk of having a BTB skin test positive animal was 13 times more likely in Maekel and ~9 times more likely in Debub than in Anseba (Table 3, Model 1). Differences in BTB prevalence may be due to risk factors varying across regions, as geographical location is in general an accepted risk factor. 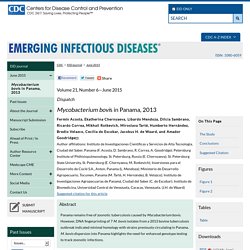 In order for this to happen, the following changes will occur: Animal Health Board (AHB) Incorporated will resign its role as the management agency to take effect at midnight on 30 June 2013. The role will pass to a new limited-liability company TBfree New Zealand Limited. From 1 July 2013 TBfree New Zealand Limited and National Animal Identification and Tracing (NAIT) Limited will become wholly-owned subsidiaries of Operational Solutions for Primary Industries (OSPRI) New Zealand Limited. The Minister for Primary Industries Nathan Guy has appointed TBfree New Zealand Limited as the agency responsible for the National Bovine TB Pest Management plan, with effect from 1 July 2013. “The revised corporate structure will deliver a range of outcomes to protect and enhance the primary sector. J Vet Adv 2013, 3(1): 20-23 Field Determination of Tuberculosis Prevalence in a Herd of Cattle Using Tuberculin and Quicking® Bo.

Veterinary Medicine International - 2012 - Herd-Level Risk Factors for Bovine Tuberculosis: A Literature Review. ECOHEALTH - 2012 - Zoonotic Transmission of Tuberculosis Between Pastoralists and Their Livestock in South-East Ethiopia. Veterinarni Medicina, 57, 2012 (2): 59–76 Prevalence of bovine tuberculosis in cattle in the highlands of Cameroon based on the. FOOD SAFETY AUTHORITY (NL) - MARS 2011 - BOCI-Egypt: Brucellosis and Tuberculosis control 21 – 25 March 2011.

Veterinary Medicine International Volume 2011 (2011), Bovine Tuberculosis and the Establishment of an Eradication Program in the. Veterinary Medicine International  Volume 2011 (2011) Preventing the Establishment of a Wildlife Disease Reservoir: A Case Study. 2006 - CAPACITY BUILDING FOR SURVEILLANCE AND CONTROL OF ZOONOTIC DISEASES. Cover photograph:Centre image courtesy of World Health Organization, P. Wot The designations employed and the presentation of material in this information product do not imply the expression of any opinion whatsoever on the part of the Food and Agriculture Organization of the United Nations concerning the legal or development status of any country, territory, city or area or of its authorities, or concerning the delimitation of its frontiers or boundaries. The papers have been reproduced as submitted by the participants at the Consultation. All rights reserved. Reproduction and dissemination of material in this information product for educational or other non-commercial purposes are authorized without any prior written permission from the copyright holders provided the source is fully acknowledged.