New Visa Rules to Study and Work in United States. News 19.03.2016 International students now have the opportunity to work for three years after completing their education in United States. 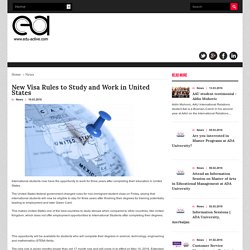 The United States federal government changed rules for non-immigrant student visas on Friday, saying that international students will now be eligible to stay for three years after finishing their degrees for training potentially leading to employment and later Green Card. This makes United States one of the best countries to study abroad when compared to other countries, like United Kingdom, which does not offer employment opportunities to International Students after completing their degrees. The long march from China to the Ivies. As the daughter of a senior colonel in China’s People’s Liberation Army, Ren Futong has lived all 17 years of her life in a high-walled military compound in northern Beijing. 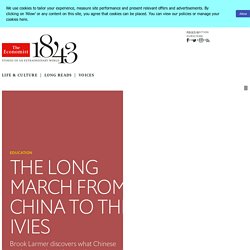 No foreigners are allowed inside the gates; the vast encampment, with its own bank, grocery store and laundromat, is patrolled by armed guards and goose-stepping soldiers. Growing up in this enclave, Ren – also known as Monica, the English name she has adopted – imbibed the lessons of conformity and obedience, loyalty and patriotism, in their purest form. At her school, independent thought that deviated from the reams of right answers the students needed to memorise for the next exam was suppressed. The purpose of it all, Monica told me, was “to make everybody the same”.

How to write the first email to a professor that may accept me as his graduate student. Shriram Krishnamurthi: Note to Interested Students. Read This First! 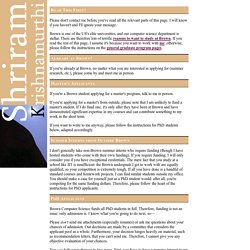 Please don't contact me before you've read all the relevant parts of this page. I will know if you haven't and I'll ignore your message. Brown is one of the US's elite universities, and our computer science department is stellar. ISIS Women and Enforcers in Syria Recount Collaboration, Anguish and Escape. Which are the best online forums or websites provides in formations for studying abroad for Indian students? The challenges of advising foreign grad students about careers (essay)

Every appointment is an excursion to another culture for graduate career counselors. 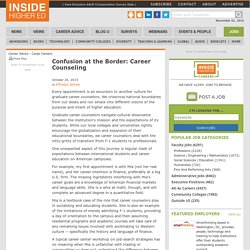 We crisscross national boundaries from our desks and run smack into different visions of the purpose and intent of higher education. Graduate career counselors navigate cultural dissonance between the institution’s mission and the expectations of its students. While our local colleges and universities rightly encourage the globalization and expansion of their educational boundaries, we career counselors deal with the nitty-gritty of transition from F-1 students to professionals. One unexpected aspect of this journey is regular clash of expectations between international students and career education on American campuses. For example, my first appointment is with Mia (not her real name), and her career intention is finance, preferably at a big U.S. firm. The International Classroom. On October 19, Inside Higher Ed published an essay by Adele Barker, a professor at the University of Arizona, titled, “A professor’s experience with unprepared Chinese students.” 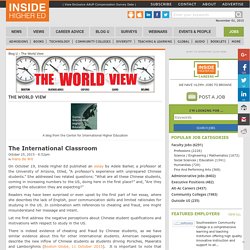 She addressed two related questions: “What are all these Chinese students, coming in increasing numbers to the US, doing here in the first place?” And, “Are they getting the education they are expecting?” Readers may have been surprised or even upset by the first part of her essay, where she describes the lack of English, poor communication skills and limited rationales for studying in the US. The International Classroom. Mapping SEVIS by the Numbers. What can international students do to enhance their chances of getting financial aid?

Blog. Comprehensive Sites. Testing. Geek on a Bicycle (Blog): How To Get Into Stanford & Other Graduate Schools. Missing Study Abroad? Find a Re-entry Conference Near You! Recently returned from abroad? 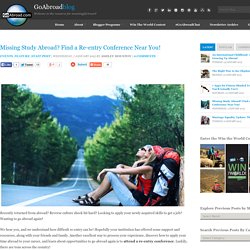 Building a Humble Brand for Your Startup. Brands can be difficult for startups, especially since the product you’re building will change often as you grow. 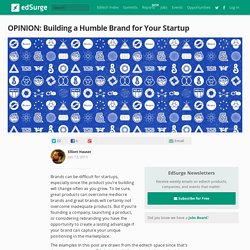 To be sure, great products can overcome mediocre brands and great brands will certainly not overcome inadequate products. But if you’re founding a company, launching a product, or considering rebranding you have the opportunity to create a lasting advantage if your brand can capture your unique positioning in the marketplace. The examples in this post are drawn from the edtech space since that’s the space my company Trinket is in. As I’ve written before, edtech is a space in which humble companies win. But the principles apply to startups in any industry. Parke Muth, consultant.