Increasing and changing forms of citizen activism, in particular by the young generation, towards environmental justice and sustainability transitions

Quadratic voting paper. It’s not enough to defend democracy – now is the time to advance it. Every time the president of the United States declares the free press an enemy or calls to congratulate a newly elected strongman, it comes as a reminder of what we already knew: democracy is in retreat, in the US and around the world. 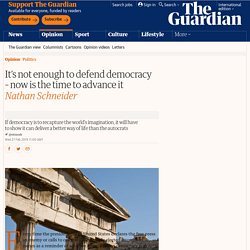 An apologist for military dictatorship now leads Brazil. China’s premier no longer has to worry about term limits. Foa&Mounk 27 3. Gutsy, organised Londoners have learned to stop gentrification in its tracks – here's how. Gentrification started as a concept in a small sub-section of urban studies in the 1960s and 1970s. 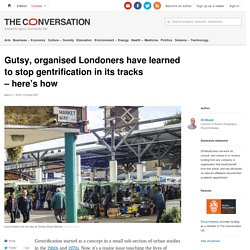 Now, it’s a major issue touching the lives of people in cities around the world. It tends to be the residents of large, global hubs which suffer the worst effects of gentrification, including displacement. How social movements like #MeToo are becoming part of corporate life - Washington Business Journal. Tracking the battles for environmental justice: here are the world's top 10. UK government spends £500,000 defending long-standing inaction on air quality. New data obtained through a Freedom of Information request estimates that the UK government has spent up to £500,000 in the courts trying to dodge its duty to tackle illegal and harmful levels of air pollution. 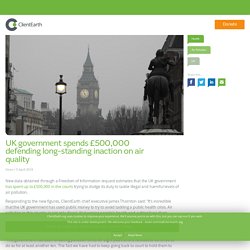 Responding to the new figures, ClientEarth chief executive James Thornton said: “It’s incredible that the UK government has used public money to try to avoid tackling a public health crisis. Air pollution in this country is not only illegal, it’s harming people’s health and cutting lives short. People’s climate case highlights lack of access to the EU courts. Climate change litigation: is your business prepared? There is a growing trend of legal action targeting businesses, particularly fossil fuel and other energy companies, on the basis that their greenhouse gas emissions have contributed to climate change. 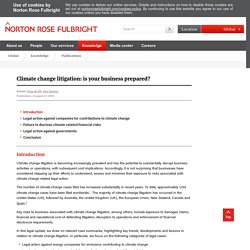 Local and state governments in both coastal and landlocked jurisdictions have been the main instigators of this kind of legal action.3 While these cases have predominantly arisen in the US, they are also beginning to occur in other jurisdictions.4 Large fossil fuel focused corporations have been the main target of such litigation, presumably because they produce a substantial proportion of carbon emissions and are viewed to have the financial resources to meet large claims.

Case summaries Below, we consider three significant climate change disputes which highlight the nature of claims seeking either a cap on emissions or compensation for harm caused by fossil-fuel induced climate change. EU taken to court by families in ‘People’s Climate Case’ over inadequate 2030 emissions target. A group of families from around the world have banded together to take the European Union to court over its failure to protect them from climate change. 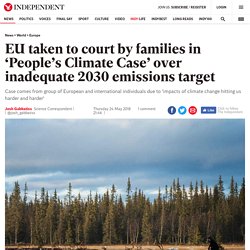 They have called the current emissions target inadequate, as they say it will allow high levels of these harmful greenhouse gases to continue until 2030. Dubbed the “People’s Climate Case”, the participants hope their action will overturn three EU emission regulation acts that have recently been approved by the European Parliament and the Council of the European Union. The 10 families include representatives from Portugal, Germany, France, Italy, Romania and Sweden, as well as Kenya and Fiji. Within their numbers are young children and representatives from Sweden’s indigenous Sami community, whose livelihoods are at particular risk due to the effects of climate change. The group has stated that it is already impacting their livelihoods, homes and culture.

Trend of environmental litigation against holding corporations on the increase - Commercial Risk. Poll: Children believe older generation not doing enough to combat climate change. The LGB Community Is Working Hard to Save the World - Pacific Standard. Social activism is on the rise, especially on the political left. 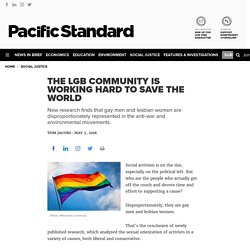 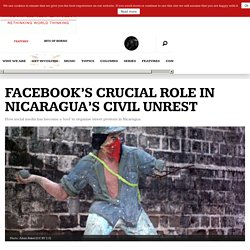 Initial backlash started after President Daniel Ortega implemented controversial pension reforms, but the unfair treatment of peaceful protestors has led to more than three months of violence. The pension reforms were quickly scrapped, but it was too little too late for Daniel Ortega and his Sandinista National Liberation Front (FSLN) Government. Patterns of Engagement: Identities and Social Movement Organizations in Finland and Malawi. Building the environment for change: social movements. PI 2018.03.01 Social Media FINAL. Pardee Paper 16. YP and political activism 2003 old but maybe relevant. PI 2018.07.11 social activism FINAL. Beyond hashtags: how a new wave of digital activists is changing society. Digital activism has transformed political protest in the last two decades. 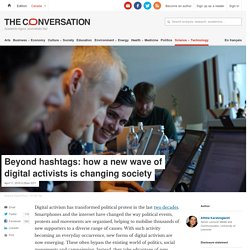 Smartphones and the internet have changed the way political events, protests and movements are organised, helping to mobilise thousands of new supporters to a diverse range of causes. With such activity becoming an everyday occurrence, new forms of digital activism are now emerging. The school climate strike was a new generation's activism – and I'm so proud. The kids couldn’t believe it. 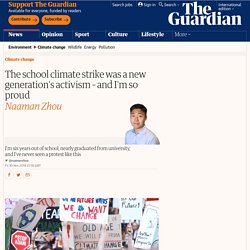 The adults couldn’t believe it. Martin Place hadn’t seen anything like it for years, and Elly and her sister had never seen anything like it – ever. Elly, 14, and Aidan, 10, had come thinking the strike would be “a small thing”. Youth in Revolt: Five Revolutions Started by Young Activists. Look at passionate young people from any era and you’ll find impressive catalysts for change. 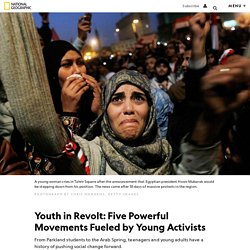 The leaders of this weekend’s March for Our Lives are no different. Students from Parkland, Florida—who faced a tragic shooting at their high school in February 2018—organized the event to demand gun-control legislation and an end to school shootings. Though the teenagers have drawn criticism from some, they've been commended by others for their spirit, focus, and savvy. They’ve maintained a clear message, mobilized a nation, and rallied support from celebrities and politicians—even former president Barack Obama and former first lady Michelle Obama. But they aren’t an anomaly. Here are five other movements similarly driven forward by young protesters.

Civil Rights Movement. 7 Times in History When Students Turned to Activism. ‘Young people are angry’: the teenage activists shaping our future. In a political climate where most adults are inert with despair, a growing number of teenagers are responding with action. After 14 children and three adults were massacred at Marjory Stoneman Douglas High School in Parkland, Florida, it was students – not parents, teachers or political representatives – who organised themselves to campaign for changes to US gun laws.

The March for Our Lives demonstration in Washington, DC on 24 March was accompanied by sister marches around the world: millions of young people supporting each other and demanding policy reform. Africa's student movements: history sheds light on modern activism. On 9 March 2015, a student hurled faeces at a statue of British colonialist Cecil Rhodes. This act led to the statue’s removal. It also inspired the most significant period of student protest in post-apartheid South Africa’s history. Then and Now: Comparing Today's Student Activism With the 1960s. For some time it has been fashionable to trash Millennials for a lack of engagement with the world.

Compared to the spirit and intention of activists of the 1960s, are today’s students and youth truly disengaged? They were on the front lines of the Occupy movement and at the heart of the first Obama campaign — which had the feeling of a movement for many. Many are involved in direct services, such as the ones at Wesleyan University, where we teach, and where 80 percent of our students pursue volunteer work during their college careers. Yet what should we make of the Research Center survey of several years ago that found that “getting rich” was the chief priority for 86 percent of those born between 1976 and 2000, compared to 81 percent of first year students in 1967 who instead prioritized their grasp on having “a meaningful philosophy of life”?

Our students will hear from those who were their age when they took part in this historic turning point in race relations in the United States. Student Activism Is Making a Comeback. A Comparison of Student Activism in American History – Educ 300: Education Reform, Past and Present. Student activism is definitely not a new phenomenon. 20 Young Activists Who Are Changing the World. Activism in the Social Media Age. As the #BlackLivesMatter hashtag turns 5 years old, a look at its evolution on Twitter and how Americans view social media's impact on political and civic engagement By Monica Anderson, Skye Toor, Lee Rainie and Aaron Smith. Why I protest – five activists on the new age of dissent. Young climate strikers can win their fight. We must all help. Citizen activism: Tackling air pollution across Europe – hackAIR. Youth Strike for Climate and the Ethics of Climate Policy. Youth activists ramp up anti-fracking campaign. Young activists of the UK Youth Climate Coalition (UKYCC) sent a letter to the UK Government calling for a meeting with the Minister of State for Energy and Clean Growth, Claire Perry, to vocalise their concerns over plans for fracking.

Unsurprisingly, they were met with diplomatic silence, with Claire declining a meeting or subsequent engagement, due to a ‘busy schedule’. Belgium climate protests: Children skip school to demonstrate. Image copyright Reuters. Meet the teens schooling us on climate. European Youth Forum. How teenage girls defied skeptics to build a new climate movement. Book Review: Youth Movements and Elections in Eastern Europe by Olena Nikolayenko. Zero Hour. Greta Thunberg, the Fifteen-Year-Old Climate Activist Who Is Demanding a New Kind of Politics. 5 young activists who inspired us this year. ‘We are not a force to be ignored’: Young people take up climate activism. Youth activism on climate change can make a difference – in Europe and beyond. New Report Reveals Young Americans are Overwhelmingly Taking Action on Environmental Issues. …this is how Gen Z.

Will Gen Z be the one to save the environment? Millennials face a climate change crisis created by past generations. Greener Than You: Boomers, Gen X & Millennials Score Themselves On The Environment. Consumers Going Green: Everything You Need to Know. The Evolution of the Sustainability Mindset. Activism in the Social Media Age. Social Media Use 2018: Demographics and Statistics.