Philip Morris Sues Uruguay Over Graphic Cigarette Packaging : Goats and Soda. Smoking has declined by about 4 percent annually in Uruguay since the country required graphic warnings on cigarette packages. 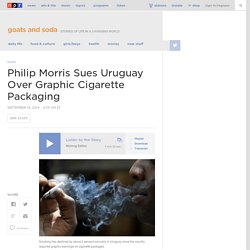 Everything you need to know about the EU-US trade deal. The EU and US are in talks to create the world’s biggest free trade zone, claiming it will make both regions richer than ever. 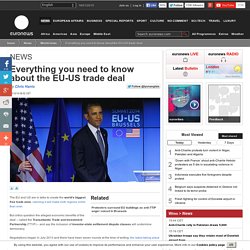 But critics question the alleged economic benefits of the deal – called the Transatlantic Trade and Investment Partnership (TTIP) – and say the inclusion of investor-state settlement dispute clauses will undermine democracy. Negotiations began in July 2013 and there have been seven rounds at the time of writing, the latest taking place in the US in October 2014. Karel De Gucht, former EU commissioner for trade, said there is “a window of opportunity” to tie up the deal in 2015, or early 2016.

TTIP and TPP: harnessing the anger of the people. TPP and TTIP, Two Different Trade Agreements, Both Will Have the Same Disastrous Results. In 2005, four nations formed a trade alliance which has come to be known as the Trans-Pacific Partnership. 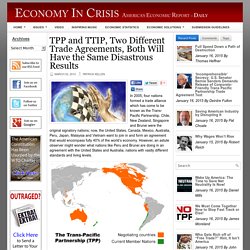 Chile, New Zealand, Singapore and Brunei were the original signatory nations; now, the United States, Canada, Mexico, Australia, Peru, Japan, Malaysia and Vietnam want to join in and form an agreement that would encompass fully 40% of the world’s economy. However, an astute observer might wonder what nations like Peru and Brunei are doing in an agreement with the United States and Australia, nations with vastly different standards and living levels. The fact is, though the agreement is supposed to be kept secret from us, enough details have leaked out to give us a basic idea of what is going on. Is WTO About to Abandon Dream of Global Free Trade? As it seeks a new chief to lead it out of a negotiating death-spiral, the World Trade Organization looks doomed to be fatally undermined by new global carve-ups that will leave many of the world's poorest sidelined. 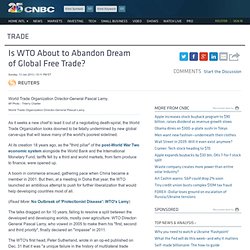 At its creation 18 years ago, as the "third pillar" of the post-World War Two economic system alongside the World Bank and the International Monetary Fund, tariffs fell by a third and world markets, from farm produce to finance, were opened up. A boom in commerce ensued, gathering pace when China became a member in 2001. Solar panel spat threatens trade war between China and Europe. Solar panels in Germany. 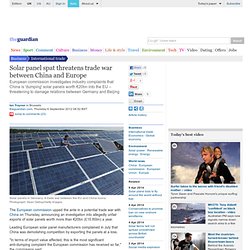 A trade war between the EU and China looms. Photograph: Sean Gallup/Getty Images The European commission upped the ante in a potential trade war with China on Thursday, announcing an investigation into allegedly unfair exports of solar panels worth more than €20bn (£15.85bn) a year. Leading European solar panel manufacturers complained in July that China was demolishing competition by exporting the panels at a loss. China accuses EU of breaching world trade rules over solar panels. EU is the world's largest market for solar panels. 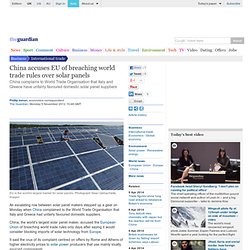 Photograph Sean Gallup/Getty Images An escalating row between solar panel makers stepped up a gear on Monday when China complained to the World Trade Organisation that Italy and Greece had unfairly favoured domestic suppliers. China, the world's largest solar panel maker, accused the European Union of breaching world trade rules only days after saying it would consider blocking imports of solar technology from Europe. WTO fails the poorest – again. Trade ministers have long insisted that the World Trade Organisaton (WTO) Doha negotiations are a vital part of the response to the global emergencies in the economy, food, climate and employment. 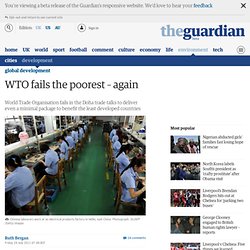 Yet we learned this week that a lack of political will has rendered the WTO incapable of agreeing even a minimal package for the least developed countries. It became clear in late April – the 10th year of negotiations – that WTO members would not manage to agree a full Doha deal. In May the director general, Pascal Lamy, announced a proposed "early harvest" package comprising four measures aimed at benefitting least developed countries. Tainted Chinese Imports Common. Dried apples preserved with a cancer-causing chemical. 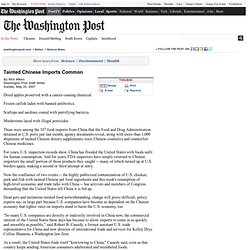 Now the confluence of two events -- the highly publicized contamination of U.S. chicken, pork and fish with tainted Chinese pet food ingredients and this week's resumption of high-level economic and trade talks with China -- has activists and members of Congress demanding that the United States tell China it is fed up. U.S. ready to levy steep duties on wind towers from China, Vietnam. WASHINGTON, Jan. 18 — The U.S. 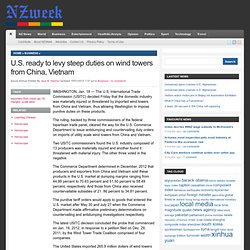 International Trade Commission (USITC) decided Friday that the domestic industry was materially injured or threatened by imported wind towers from China and Vietnam, thus allowing Washington to impose punitive duties on these products. The ruling, backed by three commissioners of the federal bipartisan trade panel, cleared the way for the U.S. Commerce Department to issue antidumping and countervailing duty orders on imports of utility scale wind towers from China and Vietnam. America's $24bn subsidy damages developing world cotton farmers. I've been looking forward to President Barack Obama's state visit to the UK this week and to hearing him address MPs and peers at Westminster Hall. 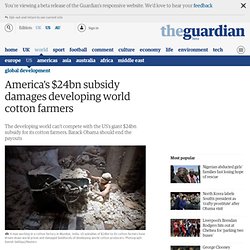 President Obama will no doubt focus on many matters of great international importance. I think cotton should be one of them. I have seen for myself just how vital cotton is for millions of farmers in west Africa and the damage caused to their livelihoods by developed country subsidies. I have pressed for EU reform, but action from the United States is critical. President Obama could, and should, take a lead in addressing this.