Invasion curve animation Biosecurity Council of WA. Sticky. Charting culture. Culture spreads through people, but how does that really happen? 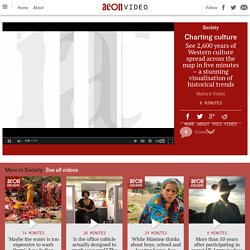 This data visualisation from Nature Video charts the movement of 120,000 prominent cultural figures – predominantly European and North American – between 600 BC and 2012 CE, by plotting lines between where each one was born and died. The resulting map reveals not only how religion, technology, resources and mass migrations entwine with the spread of ideas and culture, but also the relative cultural dominance of different population centres over time. While limited by its Eurocentrism – reflecting history as written by the victors – the visualisation proves to be an interesting tool for reimagining history. Myna Eradication on Denis Island. Winter in the Subantarctic: A Short Film. Electric Ants MAIN. A short animation film about invasive alien species. Korte animatiefilm over de tijgermug in Nederland - en de petitie.

Mission Accomplished - Landline - ABC. PIP COURTNEY, PRESENTER: The pest eradication project carried out on remote Macquarie Island is considered one of the world's most successful, with huge populations of rabbits, rats and mice wiped out. 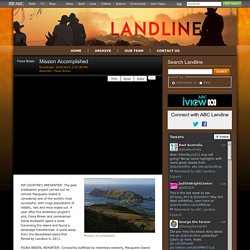 A year after the ambitious project's end, Fiona Breen and cameraman David Hudspeth spent a week traversing the island and found a landscape transformed. A world away from the devastated island first filmed by Landline in 2011. FIONA BREEN, REPORTER: Constantly buffeted by relentless westerly, Macquarie Island can be beautiful one minute, hell the next. Tasmania's parks and wildlife rangers come to this wild outpost to monitor sea birds. MAN: This part of the world is a fairly gnarly part of the world. FIONA BREEN: Now they'll have this converted water tank hut for refuge from the harsh conditions. MAN: The huts were meant to be pulled out totally, that was all part of the process, but we've had special approval to actually keep it in place. Invasive Africa: Tuta absoluta. Don't Dump That Fish. Impacts of invasive plants in Indonesia. Yellow Crazy Ants - a serious threat to the Wet Tropics World Heritage Area. Philornis downsi: Buscando Una Solución (English Captions Available) 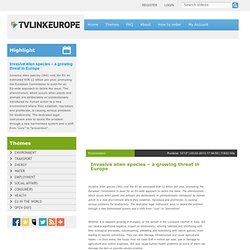 The phenomenon, which occurs when plants and animals are deliberately or unintentionally introduced by human action to a new environment where they establish, reproduce and proliferate, is causing serious problems for biodiversity. The dedicated legal instrument aims to tackle the problem through a new harmonised system and a shift from “cure” to “prevention”.

Whether it is ragweed growing in Hungary, or the spread of the Louisiana crayfish in Italy, IAS can have a significant negative impact on biodiversity: altering habitats and interfering with their ecological processes, outcompeting, predating and hybridising with native species, even leading to species extinctions. Celebrating 50 years of The IUCN Red List. People have an inherent fascination for scarce plants, fungi and animals, and have as a result been documenting the rarity of species for many centuries. 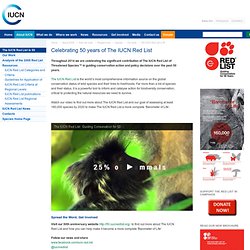 The early beginnings of The IUCN Red List started in the 1950s with a card index system that was used to document data on threatened mammals and birds. In the early 1960s the card index was transformed into a two-volume set of data sheets. They were presented in loose-leaf format within red binders and these drafts were not available for general circulation. Weeds Australia - Weeds of National Significance - Asparagus weeds. Possum eating a chick – Possums. Bandits of the Beech Forest. Rats: New Zealand animal pests and threats.

Rats are introduced pests which threaten the long-term survival of native species. 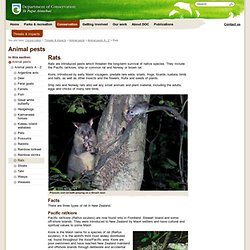 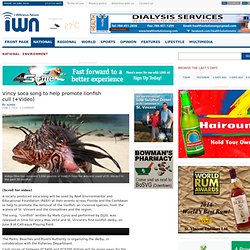 Vincent in the past 30 months. The Wonder of Weeds (2011. CABI Green Invasion (Video) LIONFISH IN JAMAICA. Invasion of the Lionfish: Impact and Action from Southern Eleuthera. Eco-Invasion: The Lionfish In Jamaica. New Rep on the Block. Turning our backs to the ocean. Taking aim at a bitter weed. Aliens Among Us.