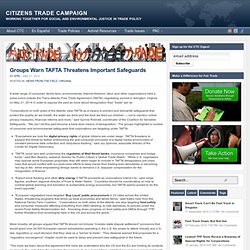 “Corporations on both sides of the Atlantic view TAFTA as a means to prevent and dismantle safeguards that protect the quality air we breath, the water we drink and the food we feed our children — not to mention online privacy measures, financial reforms and more,” said Gynnie Robnett, coordinator of the Coalition for Sensible Safeguards. “We can’t let this pact become a back-door means of deregulation.” The groups highlighted a number of consumer and environmental safeguards that corporations are targeting under TAFTA: “Everywhere we look the digital privacy rights of global citizens are under siege.

Globalization and Environmental Standard: The Debate: Race to the top? First, there are many factors that contribute to an MNC’s choice for a site, which have a more profound impact on manufacturing costs than do environmental standards. 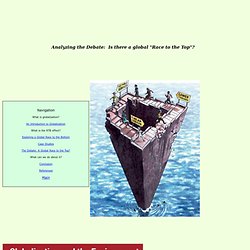 This includes access to raw materials, proximity to markets, tax benefits, and other factors that typically attract investment. Second, when MNCs invest in a variety of locations, they typically implement technology that complies with the most stringent of regulations. They do this because it is cheaper for them to implement uniform technology in all locations, as opposed to implementing diverse technologies in locations with a range of environmental regulations. It is more cost-effective to run all of their plants with the same standard technology. Make for India, not just in India. With a large engineering workforce and links with the English language, India already has some natural advantages in providing knowledge workers to global corporations. 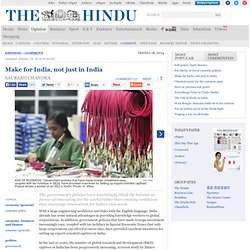 In addition, government policies that have made foreign investment increasingly easy, coupled with tax holidays in Special Economic Zones that only large corporations can afford to move into, have provided excellent incentives for setting up export-oriented captives in India. In the last 10 years, the number of global research and development (R&D) captives in India has been progressively increasing. A recent study by Zinnov Consulting found that nearly half of the top 500 global R&D spenders have set up shop in India. These captives and their service providers together have created a globally exposed and competent workforce in India in addition to a new wealthy class of a few white collared professionals.

Innovation has two beneficiaries — producers and consumers. Sharing value There is a silver lining to this approach. Latam headed for a third year of foreign trade stagnation, reports ECLAC. The UN Office in Santiago, Chile, released its annual report “Latin America and the Caribbean in the World Economy 2014”, which forecasts that the value of the region's exports will grow 0.8% on average this year after rising 23.5% in 2011, 1.6% in 2012 and falling 0.2% in 2013. 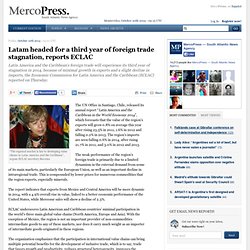 The region's imports are seen falling 0.6% in 2014, after rising 21.7% in 2011, and 3.0% in 2012 and 2013. The weak performance of the region's foreign trade is primarily due to a limited dynamism in the external demand from some of its main markets, particularly the European Union, as well as an important decline in intraregional trade. This is compounded by lower prices for numerous commodities that the region exports, especially minerals. The report indicates that exports from Mexico and Central America will be more dynamic in 2014, with a 4.9% overall rise in value, linked to a better economic performance of the United States, while Mercosur sales will show a decline of 2.3%.

Trade, Economy, & Related Issues. The lies behind this transatlantic trade deal. Panic spreads through the European commission like ferrets in a rabbit warren. 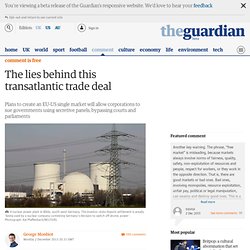 Its plans to create a single market incorporating Europe and the United States, progressing so nicely when hardly anyone knew, have been blown wide open. All over Europe people are asking why this is happening; why we were not consulted; for whom it is being done. They have good reason to ask. The commission insists that its Transatlantic Trade and Investment Partnership should include a toxic mechanism called investor-state dispute settlement. The Unfairness of 'Fair Trade' What is so called ‘fair trade’? 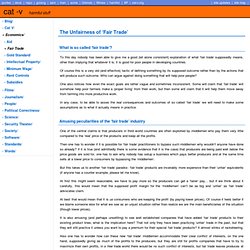 To this day nobody has been able to give me a good (let alone consistent) explanation of what ‘fair trade’ supposedly means, other than implying that whatever it is, it is good for poor people in developing countries. Of course this is a very old (and effective) tactic of defining something by its supposed outcome rather than by the actions that will produce such outcome. Who can argue against doing something that will help poor people? One also notices how even the exact goals are rather vague and sometimes inconsistent. Some will claim that ‘fair trade’ will somehow help poor farmers make a ‘proper living’ from their work, but then some will claim that it will help them move away from farming into more productive work. In any case, to be able to asses the real consequences and outcomes of so called ‘fair trade’ we will need to make some assumptions as to what it actually means in practice. International / About / Our vision and mission. A world in which all producers can enjoy secure and sustainable livelihoods, fulfil their potential and decide on their future. 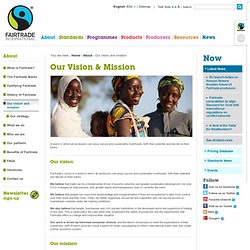 Our vision Fairtrade’s vision is a world in which all producers can enjoy secure and sustainable livelihoods, fulfil their potential and decide on their future. International / Standards / Aims of Fairtrade standards. Fairtrade standards are designed to support the sustainable development of small producer organizations and agricultural workers in the poorest countries in the world. 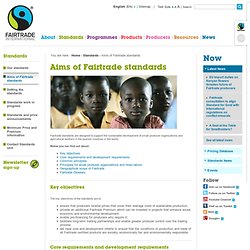 Core requirements and development requirements Fairtrade standards distinguish between core requirements, which producers must meet to be certified, and development requirements that encourage producers to continuously improve and to invest in the development of their organizations and their workers. This concept is developed for the target group of Fairtrade; disadvantaged producers and workers. It encourages sustainable, social, economic and environmental development of producers and their organizations. Common principles. Locally grown goods. Local Food and its Disadvantages. Is Local Food Better? Editor's note: The local-food movement has been gaining momentum in developed countries, and in many developing countries as well, in recent years; in the United States alone, sales of locally grown foods, worth about $4 billion in 2002, could reach as much as $7 billion by 2011. 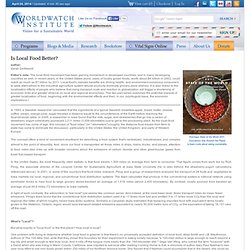 Local food's claimed benefits are driving health- and environment-conscious consumers to seek alternatives to the industrial agriculture system whose products dominate grocery-store shelves. It is also linked to the localization efforts of people who believe that rising transport costs and reaction to globalization will trigger a shortening of economic links and greater reliance on local and regional economies. Why Buy Locally Grown? You’ve probably been told a million and one times that you should buy locally grown. 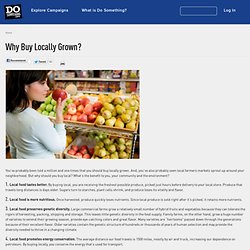 And, you’ve also probably seen local farmers markets sprout up around your neighborhood. But why should you buy local? What’s the benefit to you, your community and the environment? Local food tastes better. By buying local, you are receiving the freshest possible produce, picked just hours before delivery to your local store. Local & Regional Food Systems. What is a “food system”? Food systems comprise all aspects of food production (the way the food is grown or raised; the way the food is harvested or slaughtered; and the way the food is processed, packaged, or otherwise prepared for consumer purchase) and food distribution (where and how the food is sold to consumers and how the food is transported).