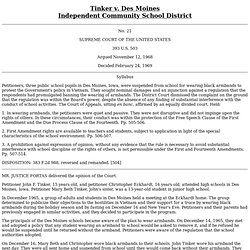 When you censor student speech, you’re mostly teaching kids to live with censorship. Courtesy of Keep a Breast Canada Locker No. 319 at Warren Harding Junior High School in Des Moines, Iowa, is an unlikely historical site. 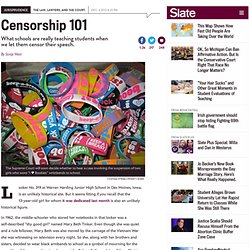 But it seems fitting if you recall that the 13-year-old girl for whom it was dedicated last month is also an unlikely historical figure. Bryan College Triangle. Student editor publishes story on his own after it’s spiked by college president. Alex Green, editor of the student newspaper at Bryan College in Dayton, Tenn., heard over the summer that his Biblical Studies professor was leaving the school. 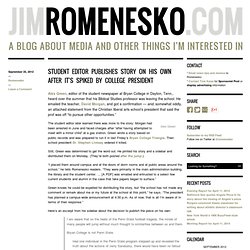 He emailed the teacher, David Morgan, and got a confirmation — and, somewhat oddly, an attached statement from the Christian liberal arts school’s president that said the prof was off “to pursue other opportunities.” Alex Green. Alex Green, Bryan College Student Editor, Risks Being Expelled For Reporting On Professor's Arrest. A student editor at Bryan College in Tennessee defied the school administration to report and publish a story on a professor's alleged sex crimes. 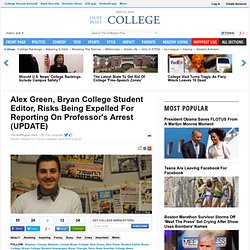 The college told Alex Green, editor-in-chief of the student newspaper, The Triangle, that Assistant Professor Dr. David Morgan resigned to "pursue other opportunities. " Green later learned Morgan was arrested on June 24 for attempting to meet with a "minor child" at a gas station in Georgia. Green confirmed with the FBI that Morgan was facing charges related to "attempted aggravated child molestation and child sexual exploitation. " When Green attempted to publish his article on it, Bryan College president Dr. 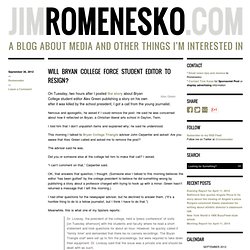 Nervous and apologetic, he asked if I could remove the post. He said he was concerned about how it reflected on Bryan, a Christian liberal arts school in Dayton, Tenn. I told him that I don’t unpublish items and explained why; he said he understood. Student's story on professor sex scandal causes uproar. The entrance to Bryan College from Highway 127 in Dayton, Tenn. 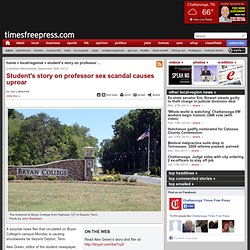 A surprise news flier that circulated on Bryan College's campus Monday is causing shockwaves far beyond Dayton, Tenn. Alex Green, editor of the student newspaper, had planned to publish a story about a Biblical studies professor who resigned after being arrested on several attempted child molestation charges. According to the 22-year-old Green, the story was spiked by Bryan President Stephen Livesay. When Green left the fliers around campus anyway about the arrest of David Morgan, news spread quickly. National news blogs wrote about the conservative Christian college's attempt to stifle the story, which was based on public records.

Wisconsin Watch.org What we do. The Wisconsin Center for Investigative Journalism, WisconsinWatch.org, is a nonprofit and nonpartisan center based in Madison, Wis. 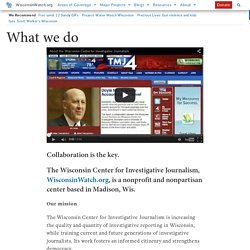 Our mission The Wisconsin Center for Investigative Journalism is increasing the quality and quantity of investigative reporting in Wisconsin, while training current and future generations of investigative journalists. Its work fosters an informed citizenry and strengthens democracy. Our focus is on government integrity and quality of life issues. Emilybell : important story - how Republicans... Watch out, watchdogs. DETROIT, MI — At the conclusion of a marathon overnight session, Wisconsin legislators early this morning added a provision to the state budget that would expel the Wisconsin Center for Investigative Journalism , a nonprofit investigative journalism institute, from its offices at the University of Wisconsin in Madison. 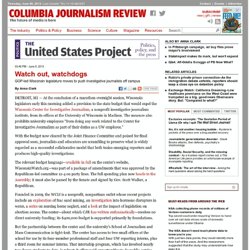 The measure also prohibits university employees “from doing any work related to the Center for Investigative Journalism as part of their duties as a UW employee.” With the budget now cleared by the Joint Finance Committee and poised for final approval soon, journalists and educators are scrambling to preserve what is widely regarded as a successful collaborative model that both trains emerging reporters and produces high-quality investigations. Mitch Daniels Denies Trying To Censor Indiana Universities. INDIANAPOLIS — Purdue University President Mitch Daniels on Wednesday denied trying to quash academic freedom while serving as Indiana's governor, a day after an Associated Press report cited emails in which he opposed use of a book by historian and antiwar activist Howard Zinn. 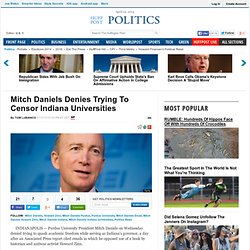 Conservative free speech advocates rose to his defense, saying it was appropriate for Daniels to express concern about what was taught in the state's public institutions. The leader of the school's faculty senate, meanwhile, said it was too soon to say if the university's professors would conduct a review of Daniels' actions. Emails published Tuesday by the AP show Daniels tried to ensure Zinn's book was not used in Indiana's K-12 classrooms and colleges and that he wanted to "disqualify the propaganda" he said was being taught to teachers in training at Indiana's colleges. "In fact, the question I asked on one day in 2010 had nothing to do with higher education at all. Joined by a Broad Coalition, FIRE Urges Departments of Education and Justice to Protect Campus Speech, Retract Controversial 'Blueprint' April 12, 2013 WASHINGTON, July 16, 2013—In an open letter sent today, the Foundation for Individual Rights in Education (FIRE) and a broad coalition of organizations and individuals urged the Department of Education (ED) and the Department of Justice (DOJ) to retract a controversial “blueprint” for campus sexual harassment policies that threatens student and faculty rights. 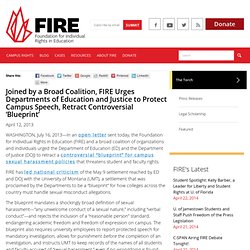 Federal Campus Sexual Harassment Policy Draws Free Speech Concerns. The federal government is facing pressure from civil-liberties advocates to back down from a policy meant to curb sexual harassment at colleges and universities -- just as sexual-assault survivors demanded in a protest this week that the Education Department do more to punish colleges that fail to address campus assaults. A coalition of free-speech advocates, led by the Foundation for Individual Rights in Education (FIRE), wrote an open letter to the U.S. Department of Education's Office for Civil Rights and the Department of Justice Tuesday calling for officials to retract a "blueprint" for campus sexual harassment policies that critics claim would violate the First Amendment. John McCain Challenges DOJ On College Sexual Harassment Policy. Sen. John McCain (R-Ariz.) accused a group of lawyers with the Justice Department's Civil Rights Division last week of "single-handedly" redefining the meaning of sexual harassment at colleges nationwide.

Such a redefinition could violate the free speech rights of students and teachers, McCain argued in a letter to Attorney General Eric Holder. In May, following an investigation into how the University of Montana handles rape and sexual violence on campus, the Justice Department and the Education Department had jointly announced a "resolution agreement" that laid out a set of policy reforms for the school.

Sydney University student newspaper Honi Soit pulled after placing vaginas on the cover. A UNIVERSITY student newspaper has been pulled from the shelves because of a controversial cover featuring 18 vaginas. The editors of Sydney University's Honi Soit publication said they published the graphic edition in order to make a statement about how vaginas have become "artificially sexualised ... or stigmatised".

Last week, along with eighteen other young women from Sydney Uni, I had my vagina photographed to make a political statement on the front cover of Honi Soit, Australia’s oldest running weekly student newspaper. We believe that the way the media represents women’s vaginas is neither realistic or fair, and causes women to feel uncomfortable about how they look. It also gives men a distorted idea of what a vagina actually looks like. 18 women not fit for print. Why we put vaginas on the cover An editor of Sydney University's student publication explains the reasons for putting female genitalia on the cover and why the issue had to be scrapped. 22, 2013 Eighteen women are crammed into Sydney University's Women's Room.

They wait anxiously for the photographer to arrive. Most don't know each other, but they are about to be united in an unusual way. "I have no idea what mine looks like – I haven't got the mirror out in years," confesses one. "I don't want to feel ashamed," says another. Nicholson Museum, Main Quadrangle, Sydney University.

Someone makes an easy joke about how annoying periods are, everyone chuckles, and the camaraderie grows. Hard News. Angry Administration. Teenage Journalists Know What It’s Like. In 36 states, student journalists do not have full first amendment protections. My story on how these impressive student reporters dealt with censorship from their administrations.