Nationalreview. Nearly six-in-ten countries are now democracies. In spite of widespread concerns across the globe about the future of democracy, public support for it remains strong, according to a Pew Research Center survey conducted earlier this year in 38 countries. 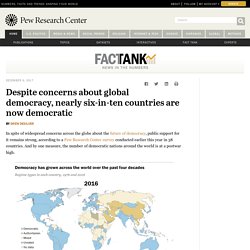 And by one measure, the number of democratic nations around the world is at a postwar high. As of the end of 2016, 97 out of 167 countries (58%) with populations of at least 500,000 were democracies, and only 21 (13%) were autocracies, both post-World War II records. The Soft Power 30 Report 2017 Web 1. French Annoyingly Retain Right to Claim Intellectual Superiority Over Americans  PARIS (The Borowitz Report)—On Sunday, the people of France annoyingly retained their traditional right to claim intellectual superiority over Americans, as millions of French citizens paused to enjoy just how much smarter they were than their allies across the Atlantic. 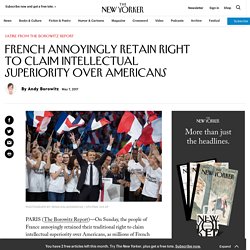 In bars and cafés across France, voters breathed a sigh of relief in the knowledge that arrogantly comparing themselves to the U.S. population, a longtime favorite pastime of the French people, would remain viable for the foreseeable future. It’s official: America is now No. 2. Reuters Hang on to your hats, America. 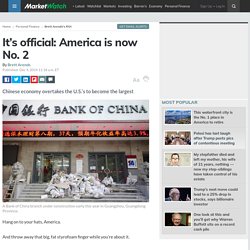 And throw away that big, fat styrofoam finger while you’re about it. There’s no easy way to say this, so I’ll just say it: We’re no longer No. 1. "Dehors, c'est dehors": l'Allemagne affiche sa fermeté en cas de Brexit. Silicon Valley’s Exodus Begins. The past few years have seen a sort of entrepreneurial utopia bloom in Silicon Valley.

Young kids with big ideas moved to the Bay Area, where they were handed millions of dollars hand over fist by zealous venture capitalists anxious to fund the next Facebook or the next Uber. But recently, there’s been trouble in paradise. The venture-capital funding is slowing down. Start-ups are raising and exiting in down rounds. Investors’ confidence seems to have been shaken. In the latest sign that Tech Bubble 2.0 is bursting, Silicon Valley residents are now moving out of the area faster than they’re arriving.

There are a number of reasons for the exodus, according to The Wall Street Journal, and Silicon Valley’s bloated cost of living is likely among them. Piketty's Inequality Story in Six Charts. The most important chart about the American economy you'll see this year. Pavlina Tcherneva's chart showing the distribution of income gains during periods of economic expansion is burning up the economics internet over the past 24 hours and for good reason. 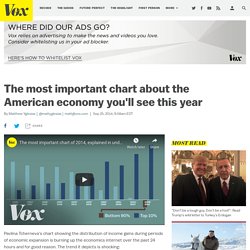 The trend it depicts is shocking: (Pavlina Tcherneva) For a long time, most of the gains from economic growth went to the bottom 90 percent of the income distribution. And, after all, the bottom 90 percent includes the vast majority of people. Ultra-rich man's letter: "To My Fellow Filthy Rich Americans: The Pitchforks Are Coming" You probably don’t know me, but like you I am one of those .01%ers, a proud and unapologetic capitalist. 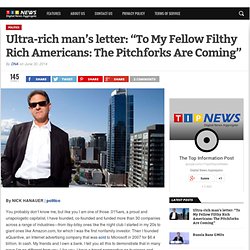 I have founded, co-founded and funded more than 30 companies across a range of industries—from itsy-bitsy ones like the night club I started in my 20s to giant ones like Amazon.com, for which I was the first nonfamily investor. Then I founded aQuantive, an Internet advertising company that was sold to Microsoft in 2007 for $6.4 billion. Piketty. 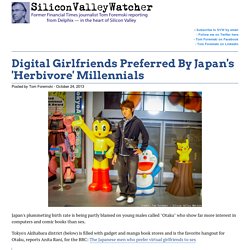 Tokyo's Akihabara district (below) is filled with gadget and manga book stores and is the favorite hangout for Otaku, reports Anita Rani, for the BBC: The Japanese men who prefer virtual girlfriends to sex Unless something happens to boost Japan's birth rate, its population will shrink by a third between now and 2060.

One reason for the lack of babies is the emergence of a new breed of Japanese men, the otaku, who love manga, anime and computers -- and sometimes show little interest in sex...Akihabara, an area of the city dedicated to the manga and anime subculture provides one clue to the country's problems. Akihabara is heaven for otaku.Kunio Kitamara, of the Japan Family Planning Association, describes many young Japanese men as "herbivores" -- passive and lacking carnal desire. Another comment: French: The Most Productive People In The World. Stephen Hawking's boycott hits Israel where it hurts: science. 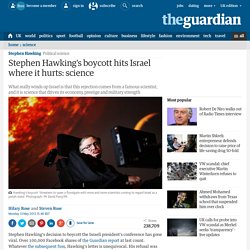