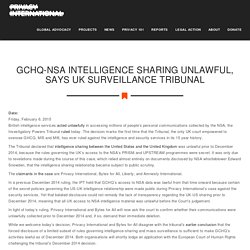 PRISM: The real concern is that governments may not be breaking any law at all – Matthew Ryder QC and Simon McKay. In the coming days politicians and security officials on both sides of the Atlantic are going to be forced to explain the revelations in the Guardian and other newspapers about PRISM. 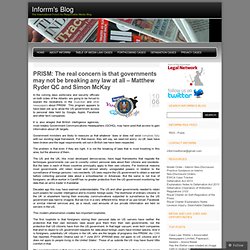 This program appears to have been set up to allow the US government access to personal data held by Google, Apple, Facebook and other tech companies. It is also alleged that British intelligence agencies, most notably Government Communications Headquarters (GCHQ), may have used that access to gain information about UK targets. Government ministers are likely to reassure us that whatever ‘does or does not’ exist complies fully with our existing legal framework. For that reason, they will say, we need not worry: no UK laws have been broken and the legal requirements set out in British law have been respected.

The problem is that even if they are right, it is not the breaking of laws that is most troubling in this area, but the absence of them. Decades ago this may have seemed understandable. Like this: Secret to Prism program: Even bigger data seizure. WASHINGTON (AP) — In the months and early years after 9/11, FBI agents began showing up at Microsoft Corp. more frequently than before, armed with court orders demanding information on customers. 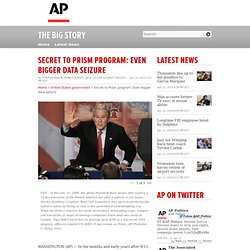 Around the world, government spies and eavesdroppers were tracking the email and Internet addresses used by suspected terrorists. Often, those trails led to the world's largest software company and, at the time, largest email provider. The agents wanted email archives, account information, practically everything, and quickly. Engineers compiled the data, sometimes by hand, and delivered it to the government. Often there was no easy way to tell if the information belonged to foreigners or Americans. Inside Microsoft, some called it "Hoovering" — not after the vacuum cleaner, but after J. NSA Swaps Information On You With Private Companies For More Information On You. 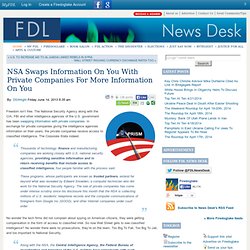 The National Security Agency along with the CIA, FBI and other intelligence agencies of the U.S. government has been swapping information with private companies. In exchange for private companies giving the intelligence agencies information on their users, the private companies receive access to classified intelligence. The Corporate State indeed. Thousands of technology, finance and manufacturing companies are working closely with U.S. national security agencies, providing sensitive information and in return receiving benefits that include access to classified intelligence, four people familiar with the process said.These programs, whose participants are known as trusted partners, extend far beyond what was revealed by Edward Snowden, a computer technician who did work for the National Security Agency. 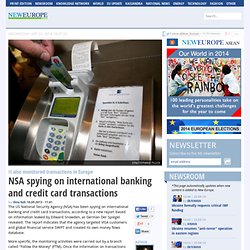 The report indicates that the agency targeted VISA customers and global financial service SWIFT and created its own money flows database. More specific, the monitoring activities were carried out by a branch called "Follow the Money" (FTM). Once the information on transactions was obtained, it was redirected to the NSA's own financial database, called "Tracfin". According to the report, in 2011 the database contained 180 million records, with 84% of those being credit card transactions details. DN! JUAN GONZÁLEZ: The Guardian newspaper reported Wednesday the National Security Agency routinely has passed raw intelligence to Israel without first removing details about U.S. citizens. 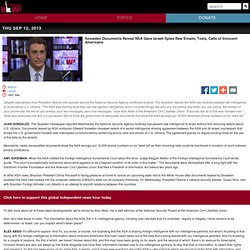 Documents leaked by NSA contractor Edward Snowden revealed details of a secret intelligence-sharing agreement between the NSA and its Israeli counterpart, that shows the U.S. government handed over intercepted communications containing phone calls and emails of U.S. citizens. The agreement places no legally binding limits on the use of the data by the Israelis. Meanwhile, newly declassified documents show the NSA wrongly put 16,000 phone numbers on an "alert list" so their incoming calls could be monitored in violation of court-ordered privacy protections. Click here to support this global independent news hour today. To talk more about all of these latest developments, we’re joined by Alex Abdo.

Alex, let’s take these in order. ALEX ABDO: It’s difficult to explain. AMY GOODMAN: And who was targeted?