The First Tranche. The intervention ratchet’s lexicon: confronting the teleology of mass atrocities prevention « Securing Rights. This is the second post in a series on the lexicon of intervention’s slippery slope. 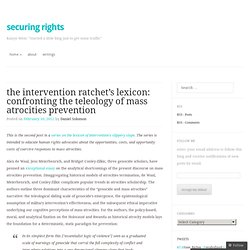 The series is intended to educate human rights advocates about the opportunities, costs, and opportunity costs of coercive responses to mass atrocities. Recruiting Governance Advisor at International Rescue Committee « evan lieberman. One eye across the sea, one eye on our own shores. Political Scientist. Blog Roundtable: Are there tips for fighting impostor syndrome? « Mr Epidemiology. This blog roundtable is part of a series about graduate school – why do it, what is it like, and what to do afterwards. 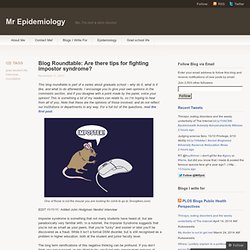 I encourage you to give your own opinions in the comments section, and if you disagree with a point made by the panel, voice your opinion! This is something a lot of my readers can relate to, so I’m hoping to hear from all of you. Note that these are the opinions of those involved, and do not reflect our institutions or departments in any way. For a full list of the questions, read the first post. One of those is not the mouse you are looking for (click to go to Snorgtees.com) EDIT 11/11/11: Added John Hodgman Nerdist interview Imposter syndrome is something that not many students have heard of, but are paradoxically very familiar with.

The long term ramifications of this negative thinking can be profound. Lets hear from the panel! Megan Carter (twitter, website): I felt this most intensely when I started my master’s. EpiGrad (twitter, website): Interesting question. Marginal Revolution — Small steps toward a much better world.

NAKED KEYNESIANISM. Unlearning Economics. A group blog on strategy, power, and destiny. Rachel Strohm. "More Than Rubies…" Reading Politics · Intervention and Prudence. Patrick Porter Finally after a busy teaching term I’ve got a chance to add some thoughts to the great post and articles by Jon Western and Joshua Goldstein on humanitarian intervention. 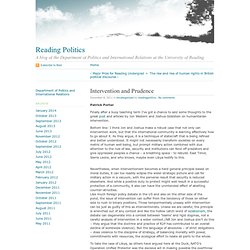 Bottom line: I think Jon and Joshua make a robust case that not only can intervention work, but that the international community is learning effectively how to go about it. As they argue, it is a technique of statecraft that is being refined and better understood. It might not necessarily transform societies on every metric of human well being, but prompt military action combined with due attention to the rule of law, security and institutions can fend off predators and give oppressed peoples a chance – a breathing space - to rebuild. East Timor, Sierra Leone, and who knows, maybe even Libya testify to this. Greg Mankiw's Blog. 14 Points. Brett Keller - global health & development, fascinatinger. A Fistful of Euros.

521 - Cartography’s Favourite Map Monster: the Land Octopus. Censoring on one end, "outliers" on the other, what can we do with the middle? - Statistical Modeling, Causal Inference, and Social Science. This post was written by Phil. 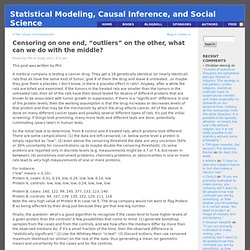 A medical company is testing a cancer drug. They get a 16 genetically identical (or nearly identical) rats that all have the same kind of tumor, give 8 of them the drug and leave 8 untreated…or maybe they give them a placebo, I don’t know; is there a placebo effect in rats?. Anyway, after a while the rats are killed and examined. If the tumors in the treated rats are smaller than the tumors in the untreated rats, then all of the rats have their blood tested for dozens of different proteins that are known to be associated with tumor growth or suppression. If there is a “significant” difference in one of the protein levels, then the working assumption is that the drug increases or decreases levels of that protein and that may be the mechanism by which the drug affects cancer. Foreign Policy - the global magazine of economics, politics, and ideas. The Quantitative Peace. Two Weeks Notice: A Latin American Politics Blog.

The Duck of Minerva. Dear all, I'm currently the program chair for ISA Midwest 2014. 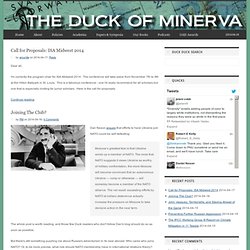 The conference will take place from November 7th to 9th at the Hilton Ballpark in St. Louis. This is a fabulous conference - one I'd really recommend for all scholars but one that is especially inviting for junior scholars. Here is the call for proposals: Continue reading Dan Nexon argues that efforts to have Ukraine join NATO could be self defeating: Moscow’s greatest fear is that Ukraine winds up a member of NATO. The whole post is worth reading, and those few Duck readers who don't follow Dan's blog should do so as soon as possible.

But there's still something puzzling me about Russia's adventurism in its near abroad: Who cares who joins NATO? Continue reading by Brandon Valeriano and Andy Owsiak What follows is a dialog between us on John Vasquez’s contributions to the field of IR based on a recent roundtable honoring his work at the Annual Meeting of the International Studies Association in Toronto in March, 2014. Bob Dylan.