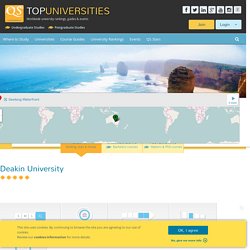 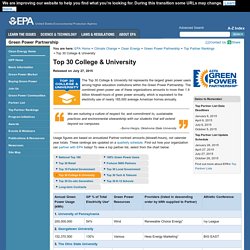 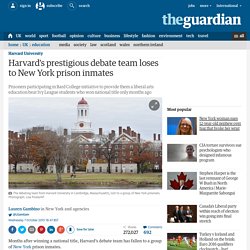 The showdown took place at the Eastern correctional facility in New York, a maximum-security prison where convicts can take courses taught by faculty from nearby Bard College, and where inmates have formed a popular debate club. Last month they invited the Ivy League undergraduates and this year’s national debate champions over for a friendly competition. A three-judge panel concluded that the Bard team had raised strong arguments that the Harvard team had failed to consider and declared the team of inmates victorious. “Debate helps students master arguments that they don’t necessarily agree with,” Max Kenner, the founder and executive director of the Bard prison initiative, told the Guardian.

Liverpool John Moores University. Can a young university be a world-leading university? When it comes to universities, students and academics alike tend to think that the older an institution is, the better it must be. 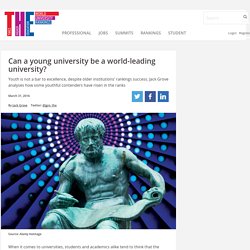 But is that really true? An analysis of the 800 institutions that feature in the Times Higher Education World University Rankings 2015-2016 suggests that it is – up to a point. Older universities do indeed tend to achieve a higher rank than newer institutions, and there is a weak correlation between the age of universities and both the citations they accrue and their performance on measures of teaching and research (especially their reputations in each). Untitled. 2015 Guide to 353 Green Colleges. The 39 Greenest Universities of 2015.

Ranking Methodology The list of 39 greenest colleges and universities below was generated using the STARS Participants & Reports database. 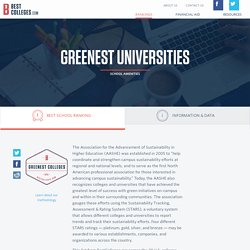 Each of these higher-learning institutions has earned a ‘Gold’ rating from STARS, signifying an overall score of 65 to 84. (At this time, there are not any U.S. schools to have earned the ‘Platinum’ rating). In order to receive a Gold rating, an academic institution must earn points in the following areas: Four additional points (known as ‘Innovation Credits’) may be awarded to schools that introduce green initiatives and programs that are deemed especially creative and resourceful. Green Universities. Find out what universities are doing to become more sustainable, and how you can get involved in environmental issues as a student. 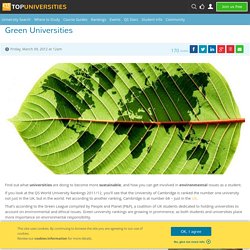 If you look at the QS World University Rankings 2011/12, you’ll see that the University of Cambridge is ranked the number one university not just in the UK, but in the world. Yet according to another ranking, Cambridge is at number 68 – just in the UK. Green Campus. Sustainability. Most vegan-friendly universities named. Rick GoodmanAustralian Associated Press Vegan uni students should consider a move to Adelaide, Canberra or Wollongong if they want the best range of animal-free eats, according to a new study. 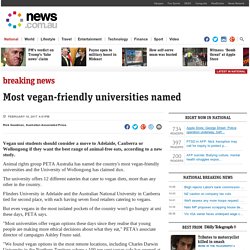 Animal rights group PETA Australia has named the country's most vegan-friendly universities and the University of Wollongong has claimed dux. The university offers 12 different eateries that cater to vegan diets, more than any other in the country. Flinders University in Adelaide and the Australian National University in Canberra tied for second place, with each having seven food retailers catering to vegans. But even vegans in the most isolated pockets of the country won't go hungry at uni these days, PETA says. "Most universities offer vegan options these days since they realise that young people are making more ethical decisions about what they eat," PETA's associate director of campaigns Ashley Fruno said. "And if they can help it, they'll choose somewhere accommodating to their needs.

" Cambridge University's King's College Chapel lawn to become meadow. Image copyrightPA Media A famous University of Cambridge view is set for a change as a pristine lawn maintained for centuries is transformed into a wildflower meadow. 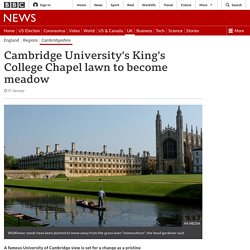 King's College Chapel and its sloping lawn down to the River Cam have become one of the city's best-known images. It is popular with tourists, featuring in thousands of Instagram posts, and is widely used to promote the city. Pitt in the Himalayas. Pitt in the Himalayas is a semester-long study abroad program run by the University of Pittsburgh and the Hanifl Center for Outdoor Education. 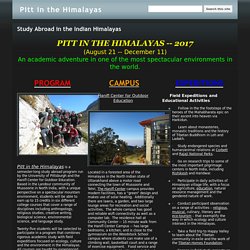 Based in the Landour community of Mussoorie in North India, with a unique perspective on a spectacular mountain environment, students will be able to earn up to 15 credits in six different college courses that cover a range of disciplines including anthropology, religious studies, creative writing, biological science, environmental science, and language study. Twenty-five students will be selected to participate in a program that combines rigorous academic study with field expeditions focused on ecology, culture and the environment in the Himalayas. Year By Year Scenes. Department of Anthropology. GEOG 128: Geography of International Affairs.

When we think of international affairs, we often think of the United Nations, foreign wars, and world trade summits. 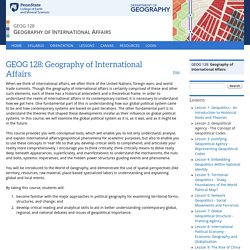 Though the geography of international affairs is certainly comprised of these and other such elements, each of these has a historical antecedent and a theoretical frame. In order to understand the realm of international affairs in its contemporary context, it is necessary to understand how we got here. One fundamental part of this is understanding how our global political system came to be and how contemporary systems are based on past iterations. The other fundamental part is to understand the theories that shaped these developments insofar as their influence on global political systems. In this course, we will examine the global political system as it is, as it was, and as it might be in the future. By taking this course, students will: