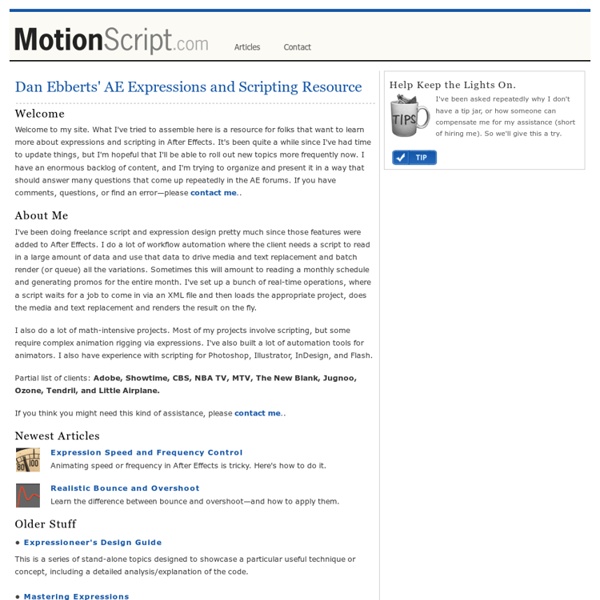 Welcome Welcome to my site. What I've tried to assemble here is a resource for folks that want to learn more about expressions and scripting in After Effects. It's been quite a while since I've had time to update things, but I'm hopeful that I'll be able to roll out new topics more frequently now. I have an enormous backlog of content, and I'm trying to organize and present it in a way that should answer many questions that come up repeatedly in the AE forums. If you have comments, questions, or find an error—please contact me..

jjgifford Expressions in After Effects I've added some pages designed to teach a few topics in geometry relevant to expressions in After Effects. This section focuses more on math than on syntax, and assumes that you're familiar with the basics of creating and using expressions. These pages are still fairly rough—I'll be revising them and adding new pages over the next week or two. The geometry material starts here. After Effects keyboard shortcuts reference You can assign shortcuts to commands in the Command list shortcut column. Select the command and type the shortcut in the text field. You can search for commands in the Command List, which is filtered by the search criteria.

The Wonderful World Of Shapes In After Effects - Tuts+ 3D & Motion Graphics Tutorial This tutorial provides you with the fundamentals of shape layers and shape effects. We will have a closer look at the most important functionalities and develop some basic examples. The topics covered will give you a good start to realize and design your own projects using shape layers. Getting to Grips with the Vanishing Point Filter - Psdtuts+ These two tutorials are simple guides about using Photoshop's Vanishing Point filter in photo editing. We'll learn some of the basics about making selections, cloning areas, and pasting images into the vanishing point filter window. This is a beginner level tutorial that will help you master the basics on this topic. Before we get started, let's take a look at the image we'll be creating. You can view the full-size image here.

CEP 5 Super mega guide: Extending Adobe apps with HTML5+Node.js It’s not that widely known yet, but ever since the CC 2014 updates in June of this year, eight different Adobe tools now support a common extension framework based purely on web technologies. The framework, called CEP 5, uses panels defined in HTML5 backed up with the full power of Node.js. In short: anyone who’s comfortable with Javascript can now customize Adobe tools in unbearably awesome ways: I’ve now built a couple of projects with this, so I thought I’d write up everything you need to get started. (This guide was originally made in Japanese - here, if you’re interested.) I call it:

My Top 5 After Effects Expressions 1. Intertial Bounce v1.2 Essentially, Inertial Bounce creates a bouncing motion of any parameter from one keyframe to the next, based on its velocity. Being that true “velocity” includes the vector (or traveling direction in 3D space), the bounce happens in whatever direction the object is traveling.