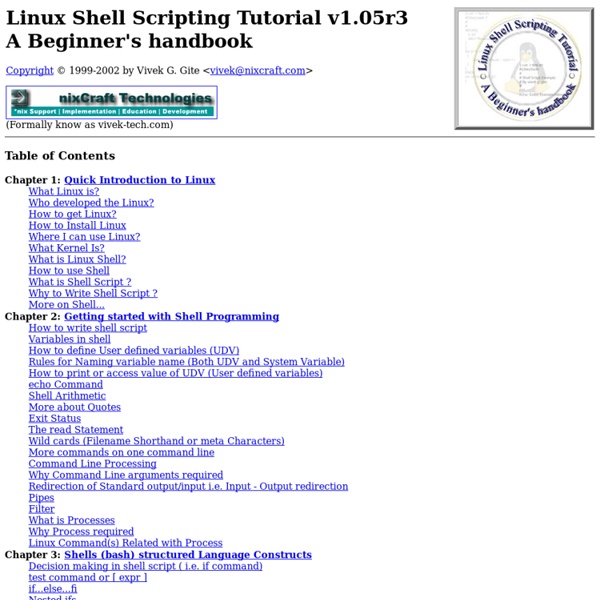 Bash Shell Scripting Currently this book provides an introduction level knowledge of Bash. Go to #External Programs, #External Links, #Using man, info and help for further directions and inspirations. Introduction[edit] What is Bash?[edit] What is shell scripting? In addition to the interactive mode, where the user types one command at a time, with immediate execution and feedback, Bash (like many other shells) also has the ability to run an entire script of commands, known as a "Bash shell script" (or "Bash script" or "shell script" or just "script"). Shell scripting is the art of creating and maintaining such scripts. Shell scripts can be called from the interactive command-line described above; or, they can be called from other parts of the system. Shell scripts are commonly used for many system administration tasks, such as performing disk backups, evaluating system logs, and so on. How to read this book[edit] (1) It's ideal to practice BASH while reading (2) Try consulting documentation for unknown commands

BASH, TCSH, etc. open source framework, web application software development | Flex - Adobe The Adobe USA site has been optimized for users within the United States. If you live outside the U.S., we recommend that you visit your local site for the most relevant information, including pricing, promotions, and local events. United States Canada - English Your country selection will be remembered for future visits. Le site web américain d'Adobe a été optimisé pour les utilisateurs résidant aux États-Unis. Canada - Français Le pays choisi sera enregistré pour vos prochaines visites. View complete list of countries › download Vim is available for many different systems and there are several versions. This page will help you decide what to download. The most popular: Details and options for: Versions before 7.3 can also be obtained with Subversion and CVS. Vim 7.4 is the latest stable version. To avoid having to update this page for every new version, there are links to the directories. The best way to install Vim on Unix is to use the sources. You need to download at the sources and the runtime files. Using git This is the simplest and most efficient way to obtain the latest version, including all patches. Summary: git clone cd vim/src make Using Mercurial This is another simple and most efficient way to obtain the latest version, including all patches. hg clone cd vim/src make Using Aap Aap is a new tool that does all the work of downloading and patching for you. The detailed explanation can be found here. version 7.x version 6.x version 5.x Cream Win64

Free Linux Books You are here: Home ▶ Linux Linux Succinctly Posted on December 7th, 2014 Linux Succinctly by Jason Cannon will teach you the basics of interacting with Linux, such as viewing and editing files and directories through the command line, and how to modify permissions. Linux Kernel Crash Book Posted on October 16th, 2012 “Linux Kernel Crash Book”, by Igor Ljubuncic, starts with crash tools via collection all the way to analysis, plus some extras and general tips. CentOS 6 Essentials Posted on September 17th, 2012 This “CentOS 6 Essentials” online book is designed to provide detailed information on the use and administration of the CentOS 6 Linux distribution. The Debian Administrator’s Handbook Posted on May 21st, 2012 “The Debian Administrator’s Handbook”, written by two Debian developers — Raphaël Hertzog and Roland Mas, this book teaches the essentials to anyone who wants to become an effective and independent Debian GNU/Linux administrator. The Linux Command Line Posted on April 1st, 2012

Linux tip: Bash parameters and parameter expansions The bash shell is available on many Linux® and UNIX® systems today, and is a common default shell on Linux. In this tip you will learn how to handle parameters and options in your bash scripts and how to use the shell's parameter expansions to check or modify parameters. This article focuses on bash, and the examples were all run on Linux systems with bash as the shell. However, the same expansions are available in many other shells, such as ksh, ash, or dash, and you may use them with these shells on other UNIX systems or even environments such as Cygwin. This tip builds on the tools covered in the earlier tip Linux tip: Bash test and comparison functions. Some of the material in this article is excerpted from the developerWorks tutorial LPI exam 102 prep: Shells, scripting, programming, and compiling, which covers many basic scripting techniques. Passed parameters Inside a function or script, you can refer to the parameters using the bash special variables in Table 1. Listing 1. #! #! #!

Drawing Graphics with Canvas - MDC Doc Center Most of this content (but not the documentation on drawWindow) has been rolled into the more expansive Canvas tutorial, this page should probably be redirected there as it's now redundant but some information may still be relevant. Introduction With Firefox 1.5, Firefox includes a new HTML element for programmable graphics. <canvas> is based on the WHATWG canvas specification, which itself is based on Apple's <canvas> implemented in Safari. It can be used for rendering graphs, UI elements, and other custom graphics on the client. <canvas> creates a fixed size drawing surface that exposes one or more rendering contexts. The 2D Rendering Context A Simple Example To start off, here's a simple example that draws two intersecting rectangles, one of which has alpha transparency: function draw() { var ctx = document.getElementById('canvas').getContext('2d'); ctx.fillStyle = "rgb(200,0,0)"; ctx.fillRect (10, 10, 55, 50); ctx.fillStyle = "rgba(0, 0, 200, 0.5)"; ctx.fillRect (30, 30, 55, 50);} draw();

BashGuide Commands and Arguments -> You are invited to make additions or modifications so long as you can keep them accurate. Please test any code samples you write. All the information here is presented without any warranty or guarantee of accuracy. A new version of this guide is currently being drafted. This guide aims to aid people interested in learning to work with BASH. This guide is targeted at beginning users. If something is unclear to you, you are invited to report this (use BashGuideFeedback, or the #bash channel on irc.freenode.org) so that it may be clarified in this document for future readers. You are invited to contribute to the development of this document by extending it or correcting invalid or incomplete information. The primary maintainer(s) of this document: The guide is also available in PDF format. BASH is an acronym for Bourne Again Shell. Shells are command interpreters. Think of a shell as a way for you to speak to your system. BASH is not your operating system.