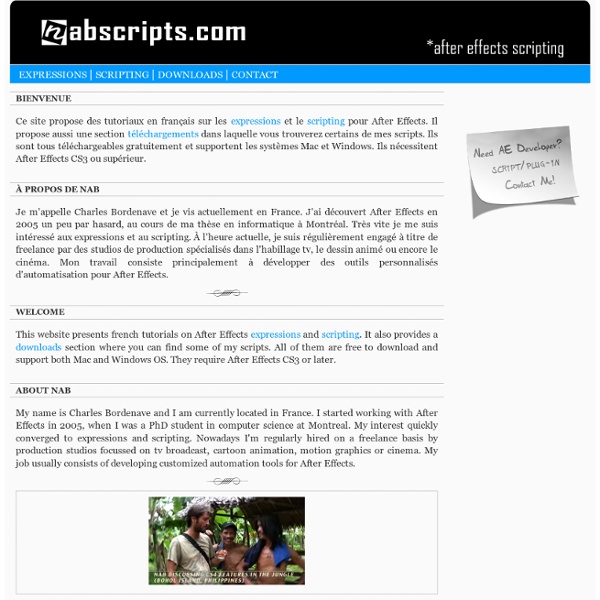 MotionScript redefinery After Effects Expressions AExperiments Expressions - Geometry Circular Functions As we mentioned in the previous section, there's a close relationship between the trigonometric functions and circles—so close that some older textbooks call these functions 'circular functions'. One reason for this relationship is that the set of all right triangles with the same hypotenuse forms a circle, with the hypotenuse defining its radius. As you can see, the perpendicular sides of the right triangles correspond to the X- and Y-coordinates of points on the circle, relative to the circle's center. For any point on a circle with radius r, the X-coordinate is given by r*cos(A) and the Y-coordinate is given by r*sin(A) — where A is the angle in radians from the horizontal. Example: Circular Motion It may seem like no big deal to make a layer orbit in a perfect circle. First, we'll define a variable for the center point of our orbit: center=this_comp.layer("Center").position; Next, we'll define the radius, in pixels: We can now write the core of the expression:

Numbering with InDesign CS3 Now it’s possible. Now it’s easy and fun. In this simple tutorial you will learn how to use improved bullets and numbering InDesign’s feature to get numbers on your tickets. Our goal will be to create 1000 tickets, numbered from number 1 to 1000. Of course, you are not limited to this number. We will start with ticket dimensions: 80x30mm. Create new A4 InDesign CS3 document with 67 non facing pages in landscape orientation. Open pages palette and double click on A master. Go - Type – Show hidden characters (make it active). Type some text in newly created text frame and after the first line press Enter 2 times to get 2 paragraph symbols as on image below. Select second paragraph symbol and lower font size for a couple of points. Now make duplicates of text frame to fill A master page. If you open page 1 you will find that text frames are not editable. Now go to page 1 and select second paragraph symbol of the first text frame located in upper left corner. List type: numbers Format: 1,2,3,4

CEP 5 Super mega guide: Extending Adobe apps with HTML5+Node.js | // andy hall It’s not that widely known yet, but ever since the CC 2014 updates in June of this year, eight different Adobe tools now support a common extension framework based purely on web technologies. The framework, called CEP 5, uses panels defined in HTML5 backed up with the full power of Node.js. In short: anyone who’s comfortable with Javascript can now customize Adobe tools in unbearably awesome ways: I’ve now built a couple of projects with this, so I thought I’d write up everything you need to get started. CEP 5 Super Mega Guide Series! Part 1: Technical overviewPart 2: Getting startedPart 3: HTML development and debuggingPart 4: Node.js integration (coming soon)Part 5: Host tool integration (coming soon)Part 6: Events (coming soon)Part 7: Packaging and distribution (coming soon) If you’d rather start with the code, here is my sample CEP extension - a self-contained custom extension that implements most of what’s described in this guide. First off is Part 1: Technical overview…

After Effects ExtendScript Training: Ep. 1, 2 & 3 by David Torno - ProVideo Coalition Welcome to the After Effects ExtendScript Script Writing Training series. My name is David Torno and I will be taking you through the process of creating scripts using Adobe’s scripting language called ExtendScript. This is a weekly series focused on teaching you, the After Effects artist, how to create scripts using the ExtendScript programming language. Scripting can drastically improve workflows, speed up repetitive tasks as well as capture and output project information. To begin this series I will show you some helpful resources for ExtendScript, reveal helpful tips to get started as well as teaching you the basics of javascript. Let’s get started. In this episode: – General goal of series – Software used – Workflow tips – Difference between Expressions and Scripts In this episode: – Comments – alert() – Arithmetic Operators – Comparison Operators – Variable – Array() – If(){}else{} – for(){} – while(){} – try{}catch(){} – Additional Resources David Torno

The Commander | All-In-One Command Launcher for After Effects Pseudo Effect Maker This software ("the Software Product") and accompanying documentation is licensed and not sold. This Software Product is protected by copyright laws and treaties, as well as laws and treaties related to other forms of intellectual property. The author owns intellectual property rights in the Software Product. Acceptance YOU ACCEPT AND AGREE TO BE BOUND BY THE TERMS OF THIS AGREEMENT BY SELECTING THE "ACCEPT" OPTION AND DOWNLOADING THE SOFTWARE PRODUCT OR BY INSTALLING, USING, OR COPYING THE SOFTWARE PRODUCT. License Grant This Agreement entitles you to install and use one copy of the Software Product. Restrictions on Transfer Without first obtaining the express written consent of the author, you may not assign your rights and obligations under this Agreement, or redistribute, encumber, sell, rent, lease, sublicense, or otherwise transfer your rights to the Software Product. Limitation of Remedies and Damages Any claim must be made within the applicable warranty period.