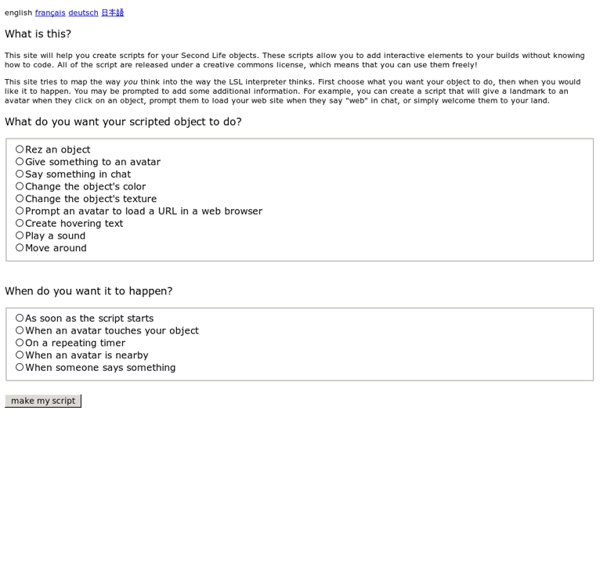 english français deutsch 日本語 What is this? This site will help you create scripts for your Second Life objects. These scripts allow you to add interactive elements to your builds without knowing how to code. This site tries to map the way you think into the way the LSL interpreter thinks. What do you want your scripted object to do? When do you want it to happen?

Migration An installation of MacPorts and the ports installed by it are only designed to work on a single OS release and a single CPU architecture. If you upgrade to a new OS version (e.g. from Leopard to Snow Leopard) or migrate to a new machine with a different type of CPU (e.g. PowerPC to Intel), you may get lucky and have your ports keep working, but in general, things will break. If you are only upgrading Xcode (e.g. 4.1 to 4.2 on Lion) but not the major OS version or CPU architecture, you do not need to reinstall ports as described below. Reinstall Xcode ¶ After performing either of these types of system upgrades, you will need to update the development tools. Mac OS X 10.6 Snow Leopard and earlier ¶ You will find the Xcode installer on the Mac OS X installation DVD or on the Apple Developer web site. OS X 10.7 Lion and OS X 10.8 Mountain Lion ¶ OS X 10.9 Mavericks ¶ For minimum support of MacPorts, you need the Command Line Tools, which can be installed using xcode-select --install.

How To Build An iPhone App Without Hiring A Developer GNU Radio - Download - gnuradio.org Stable¶ The latest stable release, as well as older stable releases, of GNU Radio can be found here: Also, check the news (in the box at the right) for announcements on the latest stable releases. Development¶ Get the latest weekly development code as a tarball: If you prefer the latest development code, wish to contribute to GNU Radio, or want to work with features that haven't yet made it into the stable branch, you can check out the source from the git repository using one of these two lines: $ git clone or (and this is the preferred method if your git client is version 1.6.6 or greater) $ git clone You can also pull our mirror from github: $ git clone if you plan to merge your changes back into the gnuradio tree. Later, to update your local repository you can run: $ git pull $ git checkout maint The next branch is too stale for your taste?

Popup Window Maker BuildInstallRun – rangepublic This document describes the installation of a single instance of OpenBTS on a single PC with a single radio. This default configurations support this setup, and it's the right place to start. For a multi-BTS environment, see this page. If you are updating OpenBTS, please see UpdateOpenBTS. If you want to install OpenBTS using debian packages, please see DebOpenBTS. This document details installation from trunk, with all of the latest community changes. A complete installation of OpenBTS comprises these components: OpenBTS itself. Getting the Code ¶ See Where can I get the latest code? Required Libraries/Utilities ¶ To compile the various parts of OpenBTS (minus the PBX) you'll need the following packages: autoconf libtool libosip2 libortp libusb-1.0 g++ sqlite3 libsqlite3-dev (sipauthserve only) libreadline6-dev libncurses5-dev These can be installed (on a Debian-flavored unix distro) with the following command: You will also need to install liba53, which is included with the distribution. Hardware ¶

uhd - UHD Start - Ettus Research LLC The USRP Hardware Driver™ software (UHD™) is the hardware driver for all USRP devices. It works on all major platforms (Linux, Windows, and Mac) and can be built with GCC, Clang, and MSVC compilers. The goal of the UHD software is to provide a host driver and API for current and future Ettus Research products. Users will be able to use UHD software standalone or with third-party applications, such as: Installation Instructions¶ Use these USRP Hardware Driver (UHD) software installers, no compilation necessary: Or download and install UHD software from source: Documentation¶ Code Examples¶ Help and Support¶ Building FPGA Images¶ Pre-built FPGA and firmware images are available on the build page. GNU Radio + USRP Hardware Driver Software (UHD)¶ GNU Radio is a popular SDR development toolkit commonly used with USRP devices. Web Videos¶

Teleinfo OpenBTS issue/help needed Gohar (Guest) on 2009-03-12 20:42 Hi, I have installed the OpenBTS by following the instructions on the page below: Apparently there were no errors in all the process (ie: ./bootstrap, . davek (Guest) on 2009-03-12 20:57 the following excutables are in the openbts folder you svn'ed after you do a make. they are not copied to the dist with make install, not sure why, but they work... openbts/apps/OpenBTS800 openbts/apps/OpenBTS900 openbts/Transciever/transciever gohar anwar (Guest) on 2009-03-13 03:46 Thanks for your reply Davek, In openbts/tests its written in README.test that "Tests that can be built and run. Hi Gohar I am having a similar problem - the new versions of openbts does not even have the tests directory... Please log in before posting.

Installing The Asterisk PBX And The Asterisk Web-Based Provisioning GUI On Linux I have read about Asterisk and wanted to test it out as I will be managing/troubleshooting it at work anytime soon, so I thought of getting my hands dirty and getting some basic experience on it. First, I set up a box with Linux RedHat ES4 but I think any Linux distro would do. Kubuntu/Ubuntu, Fedora or Mandriva would work fine. Here we go: 1) Get linux installed and mark down the IP address of the box. 2) su to root, then download the current tar files from to /usr/src: Asterisk to /asteriskZaptel to /zaptelLibpri to /libpriasterisk-addons to /asterisk-addons 3) Follow the commands bellow to untar each package in /usr/src (in this example I'm using versions that were up-to-date, change the version numbers to what ever versions you downloaded): 4) Start installing the different packages by following theses commands, again, as root: Should be run before building Asterisk (NOTE: You may need to reboot if you see errors about missing kernel sources cd .. cd .. cd ..

How to Streamline Asterisk So, you use Asterisk professionally, for fun, or both, and you want to know how to optimize the shit out of your Asterisk platform? No problem, I've got you covered. Grab a beer, free up the next 2 hours of your time, and let's get to it! Why Do This? To speed up your Asterisk platform. Asterisk is a large and complex PBX system with hundreds of features, commands, and various components. To make your Asterisk PBX perform at its best, it is useful to strip out everything you don't need, and force your Asterisk system to perform its best. Preparation To make this quick, you should already have a box with Asterisk up and running, ideally with some working call routing code of some sort. WARNING: Don't attempt this stuff live on production servers unless you really like abuse. Approach This is called a whitelisting approach, as you block everything by default, and then manually allow only certain features (think network security). Install Asterisk So, I guess you installed Asterisk from source.

Forums • View topic - OS X Lion, Xcode 4.2, can't build Just tried (but failed) to get a running 1.8.9 on Lion using the following steps: in res/snmp/agent.c add "#define RONLY 1" in makeopts, change “CONFIG_LDFLAGS=” to “CONFIG_LDFLAGS= /usr/lib/bundle1.o" then when I run asterisk I get dyld: Symbol not found: ___ast_adsi_availableReferenced from: /usr/local/sbin/asteriskExpected in: flat namespace Trace/BPT trap: 5 UPDATE: tried disabling res_adsi in the makemenu then re-running make and sudo make install but to no avail. UPDATE: tried without the CONFIG_LDFLAGS setting and no difference. UPDATE: tried 1.8.8.0 which was supposed to fix the Lion install problem -- failed with same error above. UPDATE: tried @yogel's suggestions (#define HAVE_ATTRIBUTE_weak 1) -- failed with same error above. @eternalravi: you disable the resources using makemenu -- after you run .