Jrunscript. Programming languages - Difference between a Java interpreter and JVM. Bean Shell. Java Script Programming. JSR (Java Specification Requests) Top five scripting languages on the JVM (infoworld.com) Anyone who has followed software development tools during the last decade knows that the term "Java" refers to a pair of technologies: the Java programming language and the Java Virtual Machine (JVM). 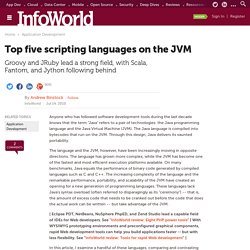 The Java language is compiled into bytecodes that run on the JVM. Through this design, Java delivers its vaunted portability. The language and the JVM, however, have been increasingly moving in opposite directions. The language has grown more complex, while the JVM has become one of the fastest and most efficient execution platforms available. On many benchmarks, Java equals the performance of binary code generated by compiled languages such as C and C++ . [ Eclipse PDT, NetBeans, NuSphere PhpED, and Zend Studio lead a capable field of IDEs for Web developers. In this article, I examine a handful of these languages, comparing and contrasting them, and identifying the needs they satisfy particularly well. Introduction to scripting in Java, Part 1 (javaworld.com)

Until recently only the hardcore were excited about scripting on the Java platform, but that was before Sun boosted the JRE's support for dynamically typed languages like Python, Ruby, and JavaScript. 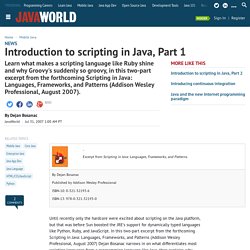 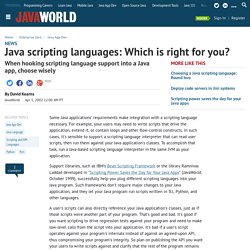 For example, your users may need to write scripts that drive the application, extend it, or contain loops and other flow-control constructs. In such cases, it's sensible to support a scripting language interpreter that can read user scripts, then run them against your Java application's classes. To accomplish that task, run a Java-based scripting language interpreter in the same JVM as your application. Support libraries, such as IBM's Bean Scripting Framework or the library Ramnivas Laddad developed in "Scripting Power Saves the Day for Your Java Apps" (JavaWorld, October 1999), successfully help you plug different scripting languages into your Java program.

Such frameworks don't require major changes to your Java application, and they let your Java program run scripts written in Tcl, Python, and other languages. The solution: Keep it simple The first benchmark: Feasibility Table 1. Table 2. Explore Scripting in Java. One of the interesting API features included from Java 6 and its later version is the javax.script package. 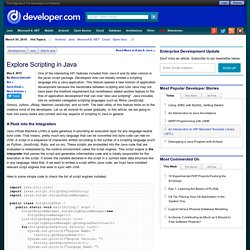 Developers now can literally embed a scripting language into a Java application. This feature opened a new horizon of application development because the handshake between scripting and core Java may not have been the forefront requirement but nonetheless added another feature to the flow of application development that can now "also use scripting". Java includes into its umbrella variegated scripting languages such as Rhino JavaScript, Groovy, Jython, JRuby, Nashorn JavaScript, and so forth. 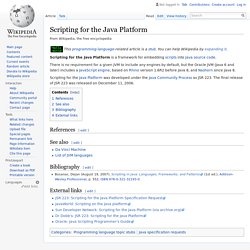 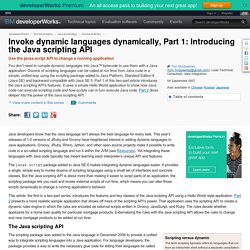 This year's releases of 1.0 versions of JRuby and Groovy have heightened interest in adding dynamic languages to Java applications. Groovy, JRuby, Rhino, Jython, and other open source projects make it possible to write code in a so-called scripting language and run it within the JVM (see Resources). InvokeDynamic and Javascript: New Compiler Dyn.js, Oracle Nashorn and Rhino. A new implementation of Javascript has been announced at jsconf.eu: dyn.js. 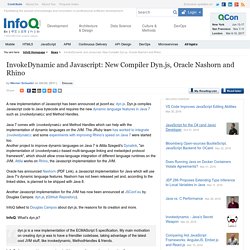 Another project to improve dynamic languages on Java 7 is Attila Szegedi's Dynalink, "an implementation of invokedynamic-based multi-language linking and metaobject protocol framework", which should allow cross-language integration of different language runtimes on the JVM. 5 things you didn't know about ... the Java Scripting API. Many Java developers today are interested in using scripting languages on the Java platform, but using a dynamic language that has been compiled into Java bytecode isn't always possible. 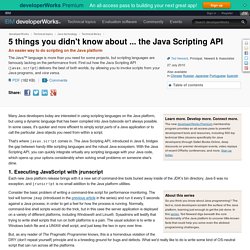 In some cases, it's quicker and more efficient to simply script parts of a Java application or to call the particular Java objects you need from within a script. That's where javax.script comes in. The Java Scripting API, introduced in Java 6, bridges the gap between handy little scripting languages and the robust Java ecosystem. With the Java Scripting API, you can quickly integrate virtually any scripting language with your Java code, which opens up your options considerably when solving small problems on someone else's dime. 1.

Each new Java platform release brings with it a new set of command-line tools buried away inside of the JDK's bin directory. Consider the basic problem of writing a command-line script for performance monitoring. Listing 1 starts with a basic shell of what we want: Back to top. Scripting Programmer's Guide (oracle.com) Who is the Java Scripting API For? 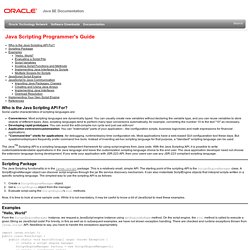 Some useful characteristics of scripting languages are:Convenience: Most scripting languages are dynamically typed. You can usually create new variables without declaring the variable type, and you can reuse variables to store objects of different types. Also, scripting languages tend to perform many type conversions automatically, for example, converting the number 10 to the text "10" as necessary.Developing rapid prototypes: You can avoid the edit-compile-run cycle and just use edit-run! Application extension/customization: You can "externalize" parts of your application - like configuration scripts, business logic/rules and math expressions for financial applications. "Command line" shells for applications -for debugging, runtime/deploy time configuration etc. Rhino (Java Script) Nashorn. Scripting & Shell Programming.